Survivor's New Season Brings Back Many of the Show's Most Influential Winners. Where Is Original Champion Richard Hatch?

On Wednesday night, CBS will air the premiere of the 40th season of Survivor — yes, Survivor is still on the air. To mark the round number, the reality show is doing something special: the 20 players competing this time around are all former winners of the show. It’s Survivor: Winners at War.

Across its 39 prior seasons, Survivor had a roster of 38 past winners to choose from. (One contestant, Sandra Diaz-Twine, has two wins under her belt.) Twenty of these “Sole Survivors” were chosen to return for the Winners at War showdown, which offers a $2 million prize for the winner — double the usual amount offered.

Among the 18 former champs who did not make the cut, one name arguably stands out the most: Survivor‘s first-ever winner, Richard Hatch. Hatch’s victory in Survivor: Borneo, a season which aired in the spring and summer of 2000, was watched by more than 50 million people; his gameplay and alliance-making is largely seen as laying the groundwork for Survivor‘s ever-enticing evolution as a strategic competition as much as a survival experience.

As one of the reality TV genre’s foundational “villains,” Hatch parlayed his reputation into stints on other reality TV shows including The Celebrity Apprentice and The Biggest Loser; he also served two prison sentences over alleged attempts to evade taxes on his $1 million winnings. Hatch is one of two openly gay men who have won seasons of Survivor. None of the 20 contestants competing in Survivor: Winners at War publicly identify as LGBTQ.

So why is Richard Hatch not on Survivor: Winners at War?

Survivor host and executive producer Jeff Probst said of Hatch, in a promotional interview for the new season, “I didn’t feel comfortable having him out on the show and representing a show that is for families.” Probst alluded to Hatch’s “history on our show,” and his penchant for nudity specifically. (During both his time on Survivor: Borneo and a subsequent stint on Survivor: All Stars, Hatch participated nude both in challenges and while living at his tribes’ camps.)

In the past, Probst has made light of nudity on the show, and in fact outright encouraged it during an infamous challenge from the show’s sixth season, Survivor: Amazon, which saw two female contestants strip naked to win a food reward. (The two women later covered an issue of Playboy magazine together.) “It bums me out how uptight most of us are with our bodies,” Probst said in a 2015 interview with Entertainment Weekly on the subject of contestants getting naked . “Who cares? Just go have fun!”

Probst added that he wasn’t sure Hatch had ever even been in the running for a spot in the Winners at War lineup. “The bigger consideration was ‘Where is the show now?’ and ‘Do these 20 winners represent the show today?’” he told Us Weekly. In that sense, we didn’t feel that Rich fit into the equation.”

Hatch feels otherwise. In a YouTube video explainer, he alleges that he was asked to participate in the winners’ series, and went through the entire casting process. “I was told I was the only one who every single producer said they wanted [on the show],” Hatch claims. “I was golden.”

Representatives for Probst and CBS did not immediately respond to TIME’s request for comment.

Hatch then says that, days before he was scheduled to fly to Fiji, where the show tapes, he was cut from the lineup. “Things have been paused,” Hatch recalled a producer telling him. Hatch also claimed that the show’s first female winner, Tina Wesson, of Survivor: Outback, was cut at the same time.

“I was told that CBS was kicking around 3 different ideas for season 40, and [was asked if] I would be willing to go back,” Wesson tells TIME in an email. “But I was later told they wouldn’t need me… CBS never explains anything to us, they basically just say you’re in or you’re out. As you can tell there’s no ‘seniors’ this season, so I think it is going to be very physical and to be honest this cast would have eaten my lunch!”

Later in his video, Hatch addresses an issue he believes led to his un-casting: the controversy surrounding instances of sexual harassment and unwanted touching that took place during the filming of Survivor‘s 39th season, Survivor: Island of the Idols, which aired last fall and in which Hatch was not involved. (Given that Survivor now tapes two seasons back-to-back in Fiji in the spring and summer months, this meant the season was filmed just weeks before the winners’ season, and during the casting process thereof.)

How has CBS dealt with instances of sexual harassment and inappropriate behavior on Survivor?

During the Island of the Idols season’s taping, multiple female contestants complained about the behavior of one of their fellow players, Dan Spilo — behavior broadcast during multiple episodes of the show. Spilo was eventually removed from the show — in a first for Survivor — after an incident involving a crew member; CBS and Survivor Entertainment Group (SEG) have said changes will be implemented on future seasons of the show, including anti-harassment and sensitivity training and a rule barring “unwanted” physical contact.

Read more: Is Time Up For Survivor? After Sexual Harassment Scandal, a Former Contestant Calls for Change on Long-Running CBS Reality Show

But as Jeff Probst appeared to allude to in his interview with Us Weekly, Hatch’s time on Survivor also encompasses an incident widely-viewed as sexual harassment: in a challenge during the 2004 “All Stars” edition of Survivor that necessitated close contact between players, he appeared to rub up on Susan Hawk, a female contestant, while competing naked in a challenge . (Hatch and Hawk had also previously competed together on Survivor: Borneo.)

“You want some, honey?” he is heard saying at the moment he appears to make bodily contact. “Gross,” Hawk responds immediately.

“Guys, come on,” a displeased Probst is shown saying in response, as he oversees the challenge from the sidelines; Probst later described the moment as “sort of inappropriate.” When the episode aired, CBS appended a warning that some might view the moment as “offensive.”

In the following episode, an emotional Hawk quit the game, citing the incident’s impact. “I was sexually violated,” Hawk said in a speech announcing her decision. “It went too far and [Hatch] crossed a line with me… I’m done with this game. There’s no way I can continue with my emotions pushed to the ground that much.”

Hawk reportedly considered filing a lawsuit against CBS, but later appeared on The Early Show with Hatch, where she said the network had been “real nice about helping to deal with the situation.” She added of her relationship with Hatch that, “we have come to terms with it and agreed to move forward and past it.” Attempts to reach Hawk for further comment were unsuccessful, nor were attempts to reach CBS or SEG for comment on the matter.

Hatch now claims that Hawk “intentionally” instigated the incident, that CBS misrepresented the moment with “salacious editing” and that he did not actually touch her. In recent tweets, he added that “I am not ‘owning up’ to any wrong-doing here whatsoever. In fact, what a wonderful opportunity for meaningful conversation around the issues if CBS/Probst had done the right thing.” That right thing, he argues, would have been allowing his return. (Of his nudity, he said the producers could, if they deemed it problematic, simply add a rule mandating his competing clothed.) 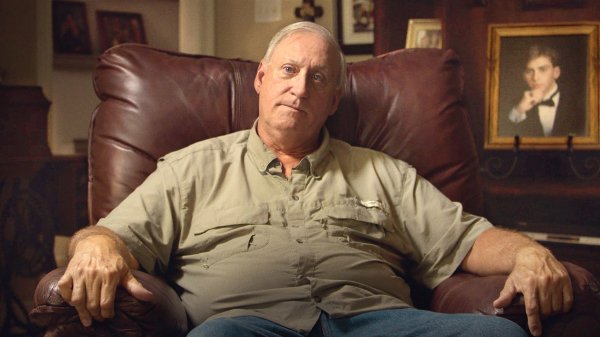 Netflix's The Pharmacist Depicts the True Story of Grieving Father's Fight Against the Opioid Epidemic
Next Up: Editor's Pick