Why People Are So Obsessed With The Bachelor, According to the Woman Who Wrote a Book on It

Arie Luyendyk Jr. starts on the 22nd season of ABC's The Bachelor.
Paul Hebert—ABC via Getty Images
By Samantha Cooney

When The Bachelor premiered in 2002, featuring 25 women competing for the heart of one man, a Washington Post critic asked: “Why are millions of people so riveted by this spectacle of cattiness, humiliation and general female degradation played out against a backdrop of cheesy ‘Dream Date’ cliches?”

But after 16 years and 35 combined seasons of The Bachelor and its woman-led spinoff, The Bachelorette, millions are still riveted by a show characterized by its extravagant dates, abundance of champagne and end goal of getting engaged by the season finale. The Bachelor’s ratings have dropped slightly over the years — season one averaged 10.7 million viewers, while season 21, its last completed season, brought in an average of about 7 million. But it was the only network television show to increase its audience in the 2016-2017 TV season, and even though the show has produced more Instagram stars than successful marriages, the franchise has thrived. It’s expanded to include spinoffs like Bachelor in Paradise and Bachelor Winter Games, inspired a scripted series and become fodder for tabloids.

The show still faces continuous criticism for how it depicts and treats women and its glaring lack of diversity among contestants, and it has also raised concerns about whether producers go too far in exploiting contestants to make good TV. Last summer, production on Bachelor in Paradise was briefly suspended after allegations of misconduct related to a sexual encounter, which was not shown on screen (an internal investigation found no evidence of misconduct by any cast member). In October, a former producer filed a lawsuit against the show alleging she was sexually harassed while working on the program, which the show denies.

Amy Kaufman, who has covered The Bachelor and Hollywood for the Los Angles Times since 2009, grapples with those issues and explores how the show became a cultural juggernaut in her new book, Bachelor Nation: Inside the World of America’s Favorite Guilty Pleasure, out March 6. Kaufman spoke to TIME about why the show remains so popular, why it’s challenging to watch as a feminist and how the #MeToo movement has affected the franchise.

TIME: When the show first premiered back in 2002, critics called it sexist and outdated. Why do you think the show has had such staying power?

Amy Kaufman: It came from [show creator] Mike Fleiss, who had come up with the Who Wants to Marry a Multi-Millionaire special [where 50 women competed in a beauty pageant-esque competition to marry an unseen millionaire on the spot.] It was the most sexist, out-there idea you could think of. There’s definitely an element of: “This is such a crazy premise, I need to tune in and see how it works because it’s such an odd social experiment.” We know now that the couples don’t really stay together and it’s not a formula for lasting love. But I think why we’re so obsessed with the show has something to do with our desire to have fantasy and romance in our life.

The show has become fodder for feminist debates in recent years. Why has this particular show has been such a catalyst for those discussions?

It is interesting that of all of the reality shows, this is the one that creates such vitriol in people — like to watch this is the most anti-feminist thing you could do. As feminist scholars I spoke to for the book said, there’s this notion that everything we consume is reflective of our identity as a feminist. I don’t think that’s necessarily true or fair. We wouldn’t be able to do anything if we held ourselves to those standards. Guys aren’t freaking out about what watching football says about them, while we’re here worrying that watching The Bachelor means I’m a traitor to my gender.

There are a lot of obviously very troublesome elements of the show that make me feel like a “bad feminist” when I’m watching — like the fact that the show perpetuates a very specific ideal of beauty: the women on the show are mostly white, weigh roughly 100 pounds and have really long hair. But who said being a feminist means you can’t want romance and love? These women who signed up for this show are openly saying: “I want love. I want marriage. And maybe I want that more than my career at this point in my life.” I’m not here to judge them for that.

Kareem Abdul-Jabbar recently wrote a column for The Hollywood Reporter about how this show is out of step in the #MeToo era. Has #MeToo changed how you view the show?

I was worried going into this season, especially coming off the Bachelor in Paradise scandal and discussion about consent, about how the show was going to explore sex — that’s even more complicated now with #MeToo. But it seems like they’ve toned that down this year. In past years, we’ve had contestants who try to sleep with the lead before the “fantasy suites” and it’s caused a whole other discussion about slut-shaming.

The #MeToo movement is about instances in which men are abusing their power and engaging in non-consensual behavior. On The Bachelor, these women are consensually there as far as we know. Those are very different things.

The show has had its own #MeToo moments — like the Bachelor in Paradise shutdown and a sexual harassment lawsuit filed by a former producer in October. How have those allegations affected the franchise?

It’s so crazy. It was just last summer that the Bachelor in Paradise scandal happened, and now it’s like it never even happened — no one really cares. When the Paradise scandal happened, a lot of people said that they couldn’t watch the show anymore because it was all about getting people drunk and they didn’t believe producers had the contestants’ best interests at heart. But now it’s like: it’s fun to watch it! [Production resumed after an internal investigation found no evidence of wrongdoing by any cast member.]

And then the sexual harassment lawsuit, I haven’t heard anything about that since I reported it. I think it’s in arbitration. But if this is the type of alleged behavior that employees on the show encourage, it definitely raises questions about how the contestants are treated as well. But no one seems to be batting an eye.

[In an October statement, Warner Brothers, the production company behind The Bachelor, said: “We take all allegations of workplace harassment very seriously. These allegations were brought to our attention and were thoroughly investigated earlier this year. Our findings did not support the plaintiff’s characterization of the events claimed to have taken place, which is why we are disappointed by the filing of this lawsuit.” Warner Bros., which did not respond to TIME’s request for comment, filed an arbitration claim in response to the suit.]

You write about the criticism the show has received for its lack of diversity. The show faced a racial discrimination lawsuit in 2012 (which was later dismissed) and the show’s most recent Bachelorette, Rachel Lindsay, was its first black lead ever. What should the show do to improve on this front?

I saw that Mike Fleiss did an interview recently where he said he was disappointed that the viewership for Rachel’s season was down a million or so, and he attributed that to racism. I agree — it’s hard to chalk that up to anything else when you have such a difference between JoJo [Fletcher, the star of the 12th season of The Bachelorette] and Rachel, who were both great Bachelorettes. But I also found that a little bit rich from him — it was almost as if executives and higher-ups at ABC haven’t been worried about this very thing for the whole time. They could have pushed harder to have a person of color to be the lead sooner.

They really need to keep casting contestants of different races and hold themselves accountable. I just hope they’re not like: “We did a black Bachelorette, so we’re good now.” That’s not how this works.

The show has also been criticized for its handling of sexual orientation. Do you think the show will ever cast a gay or bisexual lead?

It’s interesting that there hasn’t been as much of an uproar from people about wanting to see that on [The Bachelor]. [It would be great to] talk about what it means to represent love and marriage on television in 2018. But showing a same-sex partnership or a transgender lead would be really pushing the boundaries for them.

Why does the show still resonate with you?

It’s such a confusing thing — I was obviously grappling with it throughout the entire book. I get a lot of: “How can you watch that? It’s so bad for women.” But I can’t lie — when I watch two people connect, it makes me feel like I can have this someday. It might not be in a helicopter or on a mountain, but I can certainly have a guy make me feel like I’m worthy of love. 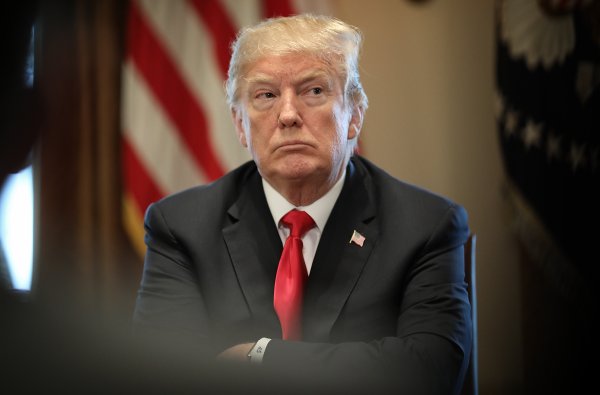 Trump Has a Message for 'Alex' Baldwin
Next Up: Editor's Pick