Who Will Win—and Who Should—at the 2020 Grammys

Awards season rolls on, with the 62nd Annual Grammy Awards right around the corner on Jan. 26. And after more than six decades of music celebrating its own on the industry’s biggest night, we know better than to put too much stock into how the prizes are allocated; even Adele tried to give her Grammy away to Beyoncé back in 2017. But one thing the Grammys have going for them is the element of surprise: last year, underdog country singer Kacey Musgraves stunned everyone by taking home Album of the Year. Meanwhile, Childish Gambino cleaned up with his searing “This Is America” in the other top categories, while Dua Lipa was crowned Best New Artist.

This year’s show arrives in a haze of turmoil, 10 days after Recording Academy President and CEO Deborah Dugan was shockingly removed from her post. But the Grammys may well rise above the fray: after all, the show will be celebrating a year in which Lil Nas X came from nowhere to dominate the charts, Lizzo resurfaced a 2017 song to boost herself to new heights and teens like Billie Eilish dominated the zeitgeist. The Grammys have always tried to balance popular appeal with more traditional tendencies, to generally mixed results. But each year is an opportunity to reset those norms. And hope springs eternal.

With the show coming up, TIME writers Raisa Bruner and Andrew R. Chow consider the wide range of nominees and make their picks for who should receive the prized trophies — and who will probably get them instead.

When We All Fall Asleep, Where Do We Go, Billie Eilish

Thank U, Next, Ariana Grande

Cuz I Love You (Deluxe), Lizzo

Father of the Bride, Vampire Weekend

Raisa Bruner: I’d love to see Lana Del Rey get her due this year. Norman F–king Rockwell was beautiful, elegiac and witty, the culmination of Del Rey’s many years exploring her sad-Americana style. It offers an alternative vision of our era, layering a veneer of pretty poetry over a decade that often felt garish. But it may be Eilish’s time to shine. When We All Fall Asleep, Where Do We Go? — recorded with her brother Finneas in their bedroom studio — is a precocious debut statement that reads as both experimental, nimble pop and a deadpan in-joke with the next generation.

These two artists actually have more in common than not; they’re just reflecting distinct eras, with the nihilism of both deeply inscribed in their work. In between them lies Ariana Grande, whose thank u, next is also generation-defining. Part of that is in its timeliness, with its release dovetailing with (and providing inside information on) Grande’s tabloid presence. The other part comes down to Grande’s overall sound, which leans heavily on a light trip-hop that feels very current. While I think this is Grande’s best album-length statement yet, the Grammys may wait to award a project that showcases more of her vocal ability.

Andrew R. Chow: Lana certainly deserves her due, but I’ve been a bit mystified this year to watch critical consensus pool around this particular record, which seems to be no stronger nor weaker than the rest of her catalog. The highs on Norman F–king Rockwell are blazingly high (more on that later), but some of the lyrics possess a strong “How do you do, fellow kids” energy (see: “I’ll catch you on the flip side / If you come back to California, you should just hit me up”).

I think Eilish has the inside track here. When We All Fall Asleep was the best-selling album of 2019 and also well liked by critics — and voters were intrigued with its sonic intricacies and oddities enough to nominate Finneas for Producer of the Year. Eilish would be the youngest winner of Album of the Year in Grammys history, and rewarding the world’s biggest teen idol would make sense for an institution making a desperate bid for relevancy.

But the Recording Academy voter pool is still just 22 percent women — so it also wouldn’t be surprising if Bon Iver walked home with a win in the mold of Arcade Fire (2011) and Beck (2015). The band’s creator Justin Vernon is eight years removed from the “Who is Bonnie Bear?” debacle, making him a bonafide Grammy vet; his music was just featured in a high-profile Lebron James Nike ad, and he’s a man who plays guitar and writes his own songs. And if it counts for anything, i,i is a truly breathtaking album, filled with daring experimental production and accessible earworms.

Bruner: “Truth Hurts” is such a joyful anthem that I want it to get some love here. But it’s been embroiled in legal questions over the origin of the song’s most memorable lyric, which could complicate things for voters. In lieu of that, I’m partial to “Bad Guy.” “7 Rings” and “Old Town Road” were the chart hits, but one is an ode to materialism (sorry, but it’s true!) and the other, while a certified banger of a song of the summer, doesn’t have the kind of gravity and production complexity that the Recording Academy tends to favor.

Chow: I don’t see how the Grammys could ride down any other path here than “Old Town Road.” While the song’s barebones production may be less shiny than that of its competitors, its seamless genre blend of country and trap is genuinely inspired — and the Lil Nas/Billy Ray pairing is almost too on the nose for a Recording Academy that loves to trot out “Grammy Moment” odd couples every year (pun intended).

And while the song is irresistible, the narrative surrounding it is even more ironclad. Lil Nas represents a feel-good underdog story and has managed to avoid cultural exhaustion thanks to his undeniable online charisma; Academy voters were surely watching this year when institutional rejections of the song (from Billboard and country radio) backfired spectacularly. If Lil Nas is looking for another viral moment, an acceptance speech on the Grammys stage would be an ideal place to make it happen.

Bruner: It certainly would be fun to see what Lil Nas X has to say — and he’s absolutely earned a right to be there; I don’t know any artist who learned so much so quickly and managed to succeed so brilliantly along the way. If they’re going to reward innovation, then I can see him taking it home, too.

Bruner: Song of the Year is about the songwriters, which makes this one a little more complicated. Although the A Star Is Born soundtrack was mostly snubbed in this round of nominations, Lady Gaga did already take home an award for “Shallow” last year, so it would be a surprise to see a repeat with the less-memorable “Always Remember Us This Way.” If this is Eilish’s night, “Bad Guy” could continue picking up awards here, now with added focus on her songwriting partner and brother Finneas.

Chow: Will you be mad if I say that the choices in this category leave me cold? “Lover,” “Someone You Loved” and “Hard Place” are pretty but fairly generic ballads. The “Truth Hurts” origin controversy certainly doesn’t help that song’s chances here. And “Bad Guy” is a better fit for Record of the Year, because, well, try singing the song out loud — it’s a nursery rhyme that barely has a melody.

The category would have been much more competitive with Ariana Grande’s gloriously petty “Thank u, next” — which was perhaps forgotten due to its late 2018 release date — and viral curveballs like Ava Max’s “Sweet But Psycho” and Lil Tecca’s “Ransom.” (And that’s not to even mention some of our own picks for best of the year, from the Highwomen to Caroline Polachek.)

But of the listed choices, I’m leaning towards Lana del Rey, though hesitantly. I’m a little perplexed as to why this track was the one chosen to rise out of this album — it feels more like a prelude than a standalone statement, and so many other Lana tracks this year were more ambitious and evocative (“Mariners Apartment Complex,” “The Greatest,” “Venice Bitch”). Nevertheless, the song is a worthy distillation of her sepia-toned ethos — and there was no better start to an album this year than her proclamation of “God damn man child,” followed by a hilarious and unprintable second line.

Bruner: Honestly, you’re right — there are a lot of middling pop ballads here that, while nice in their own way, don’t really rise above. Pour one out for all the songs that got overlooked. Give me Ava Max and Caroline Polachek any day!

Tank and the Bangas

Chow: Hey Raisa, remember when fun. beat Frank Ocean in 2013? Remember when Macklemore & Ryan Lewis beat Kendrick Lamar? All I’m saying is that you can count on the Grammys to make the wrong choice here. I’m going to guess Lizzo wins here for her ebullient multihyphenate act. But her astonishing rise feels like a very 2019-specific product of circumstance — a Netflix trailer, a wave of interest championing body positivity, a need for escape from a tense and divisive online moment. My money is on Eilish to have a more varied and stable career going forward.

Bruner: Don’t make me dwell on those strange twists of awards fate, Andrew! Those choices are why Best New Artist remains a tough one to predict — not to mention the strange eligibility clauses that have brought this collection of acts into the mix. Tank and the Bangas are underdogs who deserve all the love, but are they really new? (Their first album came out in 2013.) Eilish seems the clearest choice — she’s young, she’s fresh, and she had an absolutely dominant year, and I agree she’s got the most solid path forward. (Hello, James Bond soundtrack choice!) Don’t count out Rogers; Heard It In a Past Life was the sound of an artist carving out a genre of her own, turning pop into something warmer and earthier than we’re used to hearing. Rosalía is a powerhouse who’s just getting started.

And yet Lizzo — who has also been around for a minute — may make the most sense to voters in the category. As you’ve noted, she’s a full-package performer who really burst onto the scene and became omnipresent this year, and the Grammys might be in the mood to reward her generally here instead of for the specific works she put out.

“We’ve Got to Try,” The Chemical Brothers

Bruner: Give this one to FKA twigs, whose brilliant album Magdalene — released after the Grammy eligibility period had closed — was preceded by her stunning video for lead single “Cellophane.” In it, an ethereal, superhuman FKA twigs writhes and pole-dances her way through a cyber-dreamscape. The choreography is eye-popping, and the animation worthy of recognition. Honorable mention in this category to Sweden’s Tove Lo, whose song “Glad He’s Gone” was one of my sleeper favorites of the year, with a video that shows her casually traversing the territories of the Earth in search of her friend. That’s real love.

Chow: To quote Lil Nas himself: “come on, now.” “Cellophane” is gorgeous, but it can’t match the reach and power of “Old Town Road.” What other cultural figure could have smashed together Chris Rock, TikTok dance crazes, the Yeehaw Agenda, a washboard-playing Diplo and a bingo game into a cohesive, unfettered, 420-million-views-garnering joy?

Bruner: You have a point. I won’t be mad if FKA twigs loses out to the delightful Lil Nas X here — as long as she gets her due in the rest of the categories next year! 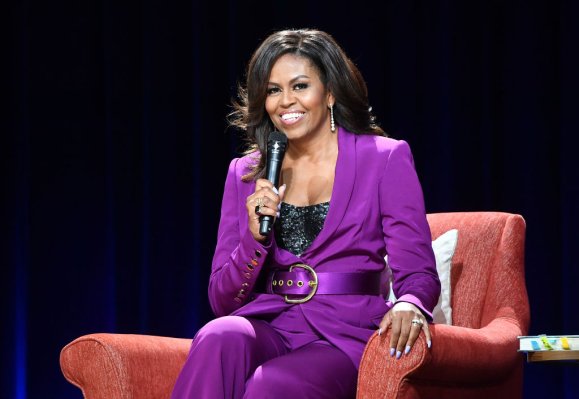 Michelle Obama Releases Her 2020 Workout Playlist
Next Up: Editor's Pick