Donald Glover released a new song and music video “This Is America” under his musical moniker Childish Gambino on Saturday Night Live this weekend — and the four-minute, single-take music video is laden with metaphors about race and gun violence in America.

The “This Is America” video, which has already racked up more than 20 million views on YouTube, reveals provocative imagery of the rapper as he guns down a choir at one point and dances while violence breaks out all around him. Childish Gambino/Glover‘s decision to wear just a pair of gray pants without a shirt in the video, allows viewers to identify with “his humanness,” as he raps about the violent contradictions that come with being black in America, says Guthrie Ramsey, a professor of music history at the University of Pennsylvania.

“The central message is about guns and violence in America and the fact that we deal with them and consume them as part of entertainment on one hand, and on the other hand, is a part of our national conversation,” Ramsey tells TIME. “You’re not supposed to feel as if this is the standard fare opulence of the music industry. It’s about a counter-narrative and it really leaves you with chills.”

Here’s Ramsay’s take on four key moments from “This Is America.”

The opening moments of “This Is America” show a man strumming a guitar alone to choral sounds. Within the first minute, Gambino shoots the man, who has been tied up with a head cover. Childish Gambino hands the gun to another man, who safely wraps it in a red cloth as the obscured man is dragged away. The moment goes right into the first rapped chorus: “This is America / Don’t catch you slippin’ up.”

Ramsay says the timing — that this happens during the song’s move from choral tones to a trap sound — allows Gambino to straddle contradictions and also allows the viewer to identify with his humanness.

“He’s talking about the contradictions of trying to get money, the idea of being a black man in America,” Ramsey says. “It comes out of two different sound worlds. Part of the brilliance of the presentation is that you go from this happy major mode of choral singing that we associate with South African choral singing, and then after the first gunshot it moves right into the trap sound.”

The early moment shows, too, that Gambino “could be anyone,” according to Ramsey. “You have him almost unadorned, as if he were totally without all the accoutrements of stardom,” he says, noting that Gambino dances in neutral colored pants, dark skin and with textured hair. “It’s just him, and therefore, it could be us.”

Gambino dancing with schoolchildren amid violence

Gambino and a group of kids clad in school uniforms dance throughout much of the “This Is America” video, smiling through impeccable moves as violence erupts behind them. The moment could be open to numerous interpretations — for example, Ramsey says, the dancers could be there to distract viewers in the same way black art is used to distract people from real problems plaguing America. But, Ramsey says, it’s better to absorb the video as a whole because America itself is a country of “very strange juxtapositions.”

“Even though we think of popular culture a a space where we escape, he’s forcing us to understand that there’s actually nowhere to run,” he says. “We have to deal with the cultural violence that we have created and continue to sustain.”

The style of dancing by Gambino in the video also calls out the way we consume culture. Gambino samples at least 10 popular dance moves derived from hip hop and African moves, including the South African Gwara Gwara dance, according to Forbes. Ramsey says the use of so many famous dance moves show how ultra-popular pieces of culture lose their specificity over time as they become more ubiquitous.

“It’s really a commentary on how much violence and contradictions there are in the consuming of pop culture, particularly in the violent elements of it,” he says. “With all the conspicuous consumption that global capitalism inspires, part of what we are consuming is this appetite for violence.”

The gunned down choir

Toward the middle of the video, a choir sings enthusiastically in a happy tone before Gambino shoots them all. The massacre and its quickness recall the 2015 Charleston shooting in which white supremacist Dylann Roof killed nine black people in a church basement, Ramsey says. The image and what it evokes shows how people struggle to reconcile with and separate different instances of violence, according to Ramsey. As we consume violence on all sorts of platforms, be it in the news, through music videos or television shows, it becomes difficult to absorb very real instances of mass murders.

“You can’t escape the violence,” Ramsey says. “But you’re being forced to separate how you feel about it in our digitized world. The virtual violence, the real violence, it’s all confused.”

Gambino running away in the closing moments

The final moments of the video show Gambino running, terrified, down a long dark hallway away from a group of people as Young Thug sings “You just a Black man in this world / You just a barcode, ayy.” Gambino’s sprint goes back to a long tradition of black Americans having to run to save their lives, according to Ramsey, who says one song dating back to slavery in the 19th century was called “Run N— Run.”

“A black person running for his or her life has just been a part of American culture dating back to slavery,” he says. 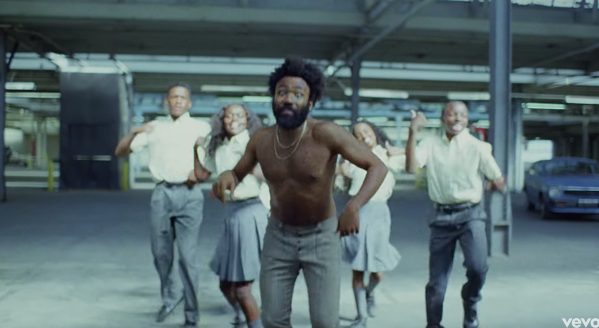 Here Are the Lyrics to Childish Gambino's "This Is America"
Next Up: Editor's Pick