The most compelling albums released this year include three Brits with vastly different sounds, a 17-year-old Angeleno and an elder statesman of the New York underground rap world. Almost all of them deal, in one way or another, with the current moment of global anxiety—whether directly protesting authority figures or offering an escape valve.

On his fourth album, British R&B experimentalist James Blake turns away from his more esoteric instincts, doubling down instead on moody, simmering tracks sprinkled with the voices of high-impact collaborators: Travis Scott, Moses Sumney, Andre 3000, Rosalía. At turns edgy and haunting or syrupy with romance, Assume Form shines as a sharply-tooled project shimmering with Blake’s signature orchestral production and off-kilter beat choices. It’s the splashes of color from his featured artists that give the album the extra kick it needs, turning songs like the percussive “Barefoot in the Park” and echoing “Tell Them” into compelling duets rich with texture and emotion. It’s an album of love songs—the oldest subject in the book—but it’s filled with new sonic ideas. (Bruner)

While New York, Los Angeles and Chicago still predictably serve as homes to flourishing jazz scenes, a city across the pond has emerged as a hotbed for cutting-edge musicianship: London. In venues across the city, artists like Shabaka Hutchings, Nubya Garcia, Nérija and the Ezra Collective lead sweaty, explosive gigs that bear little resemblance to the solemn conservatory atmospheres that have come to define the genre.

This year, the standout release from the scene came from Ezra Collective’s keyboardist, Joe Armon-Jones. Turn to Clear View moves effortlessly between jazz, R&B and hip-hop without diluting any of the three art forms; the songwriting is sharp but leaves plenty of open spaces for fiery improvisation, particularly from Armon-Jones himself and Garcia on saxophone. Diverse, inspired appearances from the Los Angeles singer Georgia Anne Muldrow, the Nigerian-British Afrobeat star Obongjayar and the London rapper Jehst all serve as testaments to the flourishing breadth and intensity of the music of the modern black diaspora. (Chow)

New York singer-songwriter King Princess, real name Mikaela Straus, is just 20. But her music sounds and feels of an earlier era, its jazzy syncopations and her silky-smoky voice coming together on songs like early viral hits “1950” and “Talia” and welcome follow-ups “Useless Phrases” and “Hit the Back” to form an altogether new alt-pop sound. Powerfully, Straus has openly embedded her sexuality in her music from the start, turning simple love songs into statements of queer identity and rallying cries for contemporary romance. Yet she’s not constricted by either genre or self-definition, instead finding moments to flirt with production styles and sounds that echo her willingness to break from tradition. On the album closer “If You Think It’s Love,” for instance, she pares things back to just her voice, manipulated into an electronic echo, which lets her sharp writing shine. “If this is love, I want my money back,” she sighs, “’cause I could use the check to spend it on a better heart to wear upon my sleeve.” For an artist so young, she already sounds like an old soul. (Bruner)

Like many other enduring artists, Bon Iver has used each of his albums to explore a new sonic world. He started with modest acoustic strumming arrangements (For Emma, Forever Ago), expanded into horn-driven stadium rock (Bon Iver), then swerved into the digital world with autotuned maximalism (22, A Million).

On his newest album, i,i, Bon Iver delves into some new territory—but he’s mostly content to draw upon his past explorations to create one spellbinding tapestry. There are lulling campfire songs and gritty rock grooves, frenetic jazz saxophones and menacing trap drums. On “iMi,” he combines all of those to create three of the most astounding minutes of his musical career.

Variation can be a death knell for artists, signaling indecision or lack of focus. But Bon Iver’s decade-plus of experimentation allows him to seamlessly combine incongruous textures and moods. And at the center lies his pliant voice, which explodes in bursts of cascading harmony before dropping down to a near-whisper to utter simple but gut-wrenching confessions: “I like you,” he sings, “and that ain’t nothing new.” (Chow)

6. Billie Eilish, WHEN WE ALL FALL ASLEEP, WHERE DO WE GO?

Most of Billie Eilish’s music has an eerie edge: “I want to end me,” she says repeatedly on “Bury a Friend” over screeching beats. “Man is such a fool, why are we saving him?” she wonders on the singsong “All the Good Girls Go to Hell.” “I’m the bad guy, duh,” she insists on the chart-topping “Bad Guy.” That strangeness is offset by her delicate singing and creative production from her brother, Finneas O’Connell, who mixes everything from the sound of sharpening knives to aggressively reverberating beats to make melodies that stand out. WHEN WE ALL FALL ASLEEP, WHERE DO WE GO is a precocious debut for anyone, let alone a 17-year-old. But the California teen—who was first boosted to fame thanks to an early SoundCloud hit—has struck a chord, both with her young generation and beyond, thanks to that mix of forward-thinking pop and an attitude of deep vulnerability, confidence and nonchalance. (Bruner)

“This your land of plenty?” snarls the New York rapper Billy Woods on his collaborative album with the Los Angeles producer Kenny Segal. Over 12 songs, the pair challenges the rosy image set forth by American myths and politicians, instead vividly narrating from the country’s crawl spaces and secret passageways. As Segal lays down a bedrock of metallic guitars and piercing cymbals, Woods weaves tales of police brutality, hospital bills, war zones and pervasive depravity and complacency: “Anthropologists watch the negro sell dope / On huddled corners / Corner stores / Jot notes,” he raps on “Spider Hole.”

But while the album paints a bleak societal portrait, it’s also filled with plenty of gallows humor and inquisitive scholarship. To analyze our moment, Woods scours the annals of history and culture, readily name-checking feminist Andrea Dworkin, Mozambican revolutionary Samora Machel, and J.D. Salinger for both inspiration and scorn. He then turns his attention back to the president: “His character boorish, bravado without the courage.” (Chow)

On Norman F–king Rockwell, Lana Del Rey does what she’s been threatening to do since her start as the star of 2011’s surprise viral hit “Video Games”: unleash an American classic. In it, she builds a self-contained world that luxuriates in vintage Americana references—both sonically and lyrically—while still hinting at some of our age’s deep-seated flaws. From her distinctive cover of Sublime’s “Doin’ Time” to the unapologetic first line of the opening track, “Goddamn, man-child,” it’s easy to get lulled into a false sense of security by Del Rey’s dreamy aesthetic and languid singing, which find their clearest expression yet on this fifth album. But her songs are full of dark stories of convoluted love, nihilistic disillusion and pain. The result is an album that’s uniquely suited for our moment, even as it sees Del Rey exploring her most experimental musical territory yet. (Bruner)

Death and disease pervade nearly every song of U.F.O.F.. There are dead moths and pigeons, hospital waiting rooms and drownings; singer-songwriter Adrianne Lenker’s voice often comes out in a strangled whisper.

But the Brooklyn indie rock band Big Thief doesn’t wallow in mortality–instead, they find inspiration and strength in both the tactile rush of the present and the allure of the known. Over rippling guitars, Lenker sings morbid lyrics with a startling optimism: “See my death become a trail / And the trail leads to a flower.”

The band understands the captivating nature of liminal spaces, and also the fraught relationship between pain and creation: “The silkworm’s rage / Iridescent thread, beautiful and dead / Billions of worms were boiled to make the bed,” Lenker sings on “Strange.” But if the music itself was a labor of love, it didn’t wear the band out; they immediately turned around and released another gorgeous album, Two Hands, five months later. Somehow, they’ve found a way to fuse stressful lyrics with gorgeous melodies to achieve catharsis; to cater to the vicious attention span of the digital era without sacrificing an inch of their meticulous attention to detail. (Chow)

2. Solange, When I Get Home

So many aspects of When I Get Home run counter to the conventions of modern pop and R&B. There’s no sheen on Solange’s vocals. The drums don’t overpower. Rote song structures are replaced by wandering repetitions; clear-eyed slogans of empowerment are replaced by fragmented mantras.

And if you spend your time waiting for a drop, you’ll miss the fact that the gentle, sparse grooves are the ends in and of themselves. Some of the best—like on “Stay Flo,” “Almeda,” “Sound of Rain”—take elements from various touchpoints, from Stevie Wonder to Pharrell to Sun Ra, but are wholly original. And with a few simple instrumental parts and muted vocal phrases repeated over and over, Solange conjures immersive trance states that become habitats for meditating, dancing and dreaming. When I Get Home may not have the urgent rhetoric about American injustice that pervades Solange’s earlier work like A Seat at the Table—but the way she builds on decades of black excellence to formulate her own aesthetic masterpiece is a radical statement on its own. (Chow)

Historically, Mary Magdalene is a conflicted character: vilified, sanctified, often reduced to the contours of her femininity and her suffering. On Magdalene, British artist FKA twigs seeks to complicate that vision of womanhood with her own. Magdalene opens with something like a funeral dirge, an echoing hymnal over which her falsetto rings at an almost unbearably high register. Over the course of the album’s nine songs, she broadens, deepens and intensifies her story and her musical palette, testing and creatively blending the waters of hip-hop, R&B, industrial and avant-garde music. Some moments are hauntingly tender, like on the delicate chorus of “Home With You”; that’s quickly offset by brutally distorted drums and her intimate recitation of pain. Other moments are bombastic with layers of electronic production and lyrics she drops as an angry rebuke, like on the arresting “Fallen Alien.” “In this age of Satan, I’m searching for a light to take me home and guide me out,” she croons, without much hope. Rescue comes in the form of self-recognition. On “Mary Magdalene,” she makes it clear in an opening overture she lays down like a mantra: “A woman’s work. A woman’s prerogative. A woman’s time to embrace she must put herself first.” Love matters, but survival—as women throughout history have learned—is inevitably a solo endeavor. (Bruner) 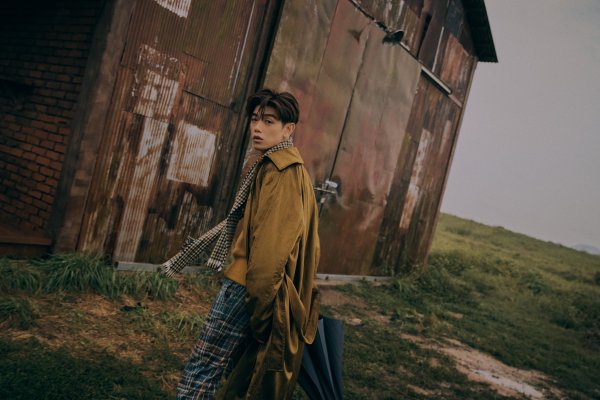 Eric Nam Made It as a K-Pop Star. Now He Wants to Make It Back Home in America
Next Up: Editor's Pick