The Best New TV Characters of 2019

Here’s a confession: Though I get the sense that I enjoy making annual best-of lists more than the average critic, it isn’t usually series as such that dominate my impressions of any given year in television. Probably because the medium thrives on its characters—growing them and changing them and importing them into our homes over the course of several hours, if not several years. It’s these human-shaped works of art (or pieces of work, anyway) that end up sticking with me. Which is why it doesn’t feel right to end 2019 without paying tribute to the soul-searching young Muslim, soul-sucking energy vampire, soul-satisfying Hot Priest and many more who made their small-screen debuts this year.

Here are the best new TV characters that graced our screens in 2019.

Colin Robinson, What We Do in the Shadows (FX)

Mark Proksch as Colin Robinson in 'What We Do in the Shadows' on FX
Copyright 2019, FX Networks. All Rights Reserved.

One of the year’s funniest new comedies was this adaptation of Jemaine Clement and Taika Waititi’s cult-hit vampire mockumentary What We Do in the Shadows. While the premise was the same as that of the 2014 original—The Real World, but with bloodsuckers—the location shifted from the creators’ native New Zealand to Staten Island, where erstwhile Ottoman warriors and Gothic enchantresses sent to conquer the New World have instead become homebodies. But the series improved on its source material by adding “energy vampire” Colin Robinson (The Office alum Mark Proksch) to the mix. A daywalker in a sweater who cherishes long city council meetings and inane factoids, he siphons energy from co-workers and acquaintances simply by droning on about extremely boring things. Dracula may be a myth, but everyone knows a Colin Robinson.

Natasha Lyonne is more fascinating than any character she could possibly play. That’s probably why her most indelible performances, from a precocious teen in Slums of Beverly Hills to a smooth-talking addict on Orange Is the New Black, have been the ones that seemed closest to her own personality. So it was a dream come true to see her not only star in but also co-create Russian Doll, a philosophical dramedy about a tough, smart, self-destructive New Yorker who dies repeatedly on her 36th birthday but keeps coming back to relive that same night. Like Lyonne, Nadia is an old soul with great retro style and some darkness in her past—which makes her the perfect avatar for an East Village fighting to maintain its pre-gentrification grit. She is a woman caught in a time loop within the larger time warp that is her neighborhood.

It’s a classic American story: A young person born and raised in the States locks horns with the traditional, religious immigrant parents who made heroic sacrifices for his benefit. But what if that rebellious kid didn’t actually reject his parents’ spiritual beliefs? What if he actually embraced them and made an effort to reconcile them with the secular aspects of his life (while still rolling his eyes at the older generation)? That is the challenge facing Egyptian-American comedian Ramy Youssef’s alter ego in the semi-autobiographical series Ramy. Neither dogmatic nor cynical, he navigates questions like whether it’s hypocritical for a Muslim to stay sober but still have sex outside of marriage with the dry, referential wit of a young adult raised on pop culture. A flashback episode in which a middle-school-aged Ramy gets his first real taste of Islamophobia post-9/11 features some of TV’s most poignant character development in recent memory. Rarely has a depiction of hybrid identity felt so thoughtful.

This lyrical drama from Tarell Alvin McCraney, the playwright behind Moonlight, features no shortage of finely wrought characters. The hero is a brilliant 14-year-old in the South Florida projects who’s trying to make a future for himself amid poverty, trauma and pressure to join a gang—all on top of the typical humiliations of adolescence. His mom is a recovering addict whose financial instability is chipping away at her innate playfulness. The character who’s stuck with me most, however, is the family’s gender-nonconforming neighbor Mx. Elijah, portrayed with wisdom and empathy by Travis Coles. A natural caregiver who takes in homeless queer and trans youth, Mx. Elijah also has the keen self-preservation instinct necessary to survive in a dangerous place. The character resonates because, as Coles told executive producer Oprah, “Mx. Elijah has reached this beacon that we’re all trying to reach, which is: Can I love myself wholeheartedly without having to change for others?”

“The priest is quite hot.” So says the comically straitlaced Claire (Sian Clifford) as she and sister Fleabag (creator Phoebe Waller-Bridge) speed through London in a cab after an unexpectedly bloody evening out. They’ve just met Andrew Scott’s nameless character—listed in the credits as the Priest but rechristened Hot Priest by the internet—at a family dinner where their widowed dad (Bill Paterson) announced he was marrying their godmother (Olivia Colman) and the handsome clergyman would officiate. A charming drinker with an irreverent wit and a dirty mouth, he accidentally seduces archetypal lost soul Fleabag over a series of intense conversations about faith. After the events of season 1, she’s already making efforts to become a better person; her crush could either bring her redemption or cause them both to backslide. The Hot Priest was a stroke of genius from Waller-Bridge, giving her soul-sick protagonist a love interest who stood a chance of changing her life and lending an organic spiritual dimension to the show’s final outing. And the chemistry between the star and Scott, with his lovely Irish brogue? Also very hot.

Sometimes real people make the most haunting fictional characters. This is the power of Marie, the pseudonymous 18-year-old protagonist of a harrowing 2015 ProPublica/Marshall Project report that formed the basis of the Netflix miniseries Unbelievable. A survivor of child abuse who grew up in the foster-care system, Marie (depicted with dignity and restraint by Booksmart’s Kaitlyn Dever) has just begun to live independently when she reports to police that a masked man broke into her apartment and raped her. As she’s made to tell her story over and over again, her stoic, sometimes irritable demeanor leads even the people she trusts most to doubt its veracity. The tragedy of it all is that what renders Marie inscrutable to her allies—and unbelievable to police—is a well-founded distrust of the institutions that so catastrophically failed her in the past.

Pen15, a comedy in which co-creators Maya Erskine and Anna Konkle play versions of themselves in the year 2000—when they were both 13—is a celebration of best friends, a museum of millennial nostalgia and a paean to pubescent humiliation. Their judgment clouded by hormones, the girls do such inexplicable things as steal a thong (the sine qua non of sex appeal at the time) and take turns wearing it. Though both characters are fantastic, Maya is the zanier and more singular of the two—a ball of nervous, extroverted energy whose constant attempts at fitting in with her peers always seem to backfire. Quick to play her biracial identity for awkward laughs and, in one hilarious episode, convinced her dead Japanese grandfather watches her masturbate, she puts an utterly unique spin on growing up different. Meanwhile, the rubber-faced Erskine is shaping up to be one of the best physical comedians on TV.

Decades of high school English classes inscribed in the popular imagination a vision of Emily Dickinson as a stern, asexual recluse. But that portrait never squared with her vibrant, transgressive work—or certain revelations about her personal life—as the recent revisionist biopics A Quiet Passion and Wild Nights With Emily have pointed out. The wildest Emily of all emerged this fall in first-time creator Alena Smith’s Apple TV+ comedy Dickinson, which juxtaposed the poet’s Victorian surroundings with the tropes and pop soundtrack of contemporary teen TV to purposely jarring, often humorous effect. Hailee Steinfield plays the poet as a lively, mischievous proto-feminist; she pisses off her parents, impersonates a man, flirts with Death (personified by Wiz Khalifa), carries on a steamy romance with her brother’s fiancée, gets wasted on opium and hallucinates a giant talking bee. In a fiercely physical performance that deserves awards recognition but may be too weird to get it, Steinfeld conjures a young woman who is, heroically and tragically, generations ahead of her time—and embodies the spirit of art itself.

Yes, reality TV cast members can be great characters. They just usually aren’t, what with all the predictable “I’m not here to make friends” bluster. But the glass-blowing competition Blown Away was like no other reality show I’d ever seen, and season 1 winner Deborah Czeresko came across as a true original. Steeped in the signifiers of feminist art, the veteran artist created a sexually suggestive breakfast installation and an artificial womb so that men could share in the burden of childbirth. She was also openly strange and rightfully self-assured, her many unapologetic quirks suggesting a level of comfort with herself that few women, real or fictional, ever achieve. That confidence earned her plenty of detractors along with a legion of die-hard fans. Not that Czeresko expected anything different. “I’m a very polarizing personality,” she said, by way of introducing herself, on the show. “I have lovers and I have haters.”

The standout in a year of great new sketch comedies, the self-explanatory Black Lady Sketch Show was a catalog of deeply original characters, from the shorts-wearing “barbecue daddies” of the Basic Ball to creator Robin Thede’s Dr. Hadassah Olayinka Ali-Youngman, Pre-PhD. Ashley Nicole Black’s Trinity is a spy whose stealth is legendary—because, as one of her glammed-up colleagues explains it, “her regular-looking face makes her nearly invisible in the field.” Men, in particular, are defenseless against her cloak of averageness. That’s it. That’s the whole recurring joke. And it never stops being funny. 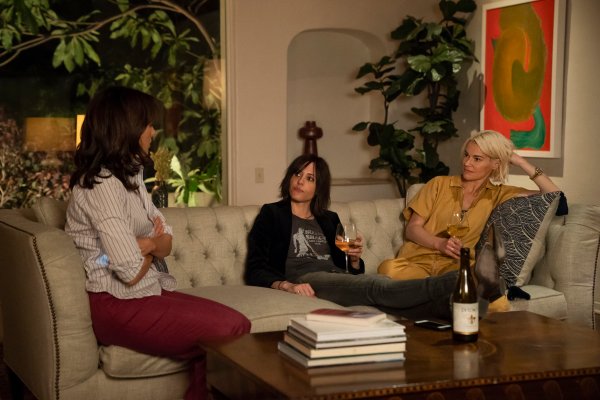 The L Word: Generation Q Is a Valiant Effort. But the Show Is a Time Capsule That Should Have Stayed Buried
Next Up: Editor's Pick