The Best Karaoke Songs for Singers and Non-Singers Alike

Whether you've got Mariah's range or you can't hold a note, there's a karaoke song for you
cookelma—Getty Images/iStockphoto
By Andrew R. Chow

Singing karaoke can be exhilarating. It can also be incredibly stressful. Many would-be singers have spent nights anxiously flipping through a karaoke bar’s enormous book of options in search of the perfect song: something too popular could provoke eye-rolls, while a deep cut could cause your friends’ gazes to drift down to their phones. Meanwhile, many classic karaoke tunes are just not meant to be sung by commonfolk—there are few fates worse than sitting through a voice-cracking, off-tune attempt at an ambitious power ballad like Whitney Houston’s “I Have Nothing.”

But karaoke shouldn’t be anxiety-inducing, as long as you know where to start. Here’s a beginner’s guide to choosing the best karaoke songs, whether you have the voice of an angel or a Tethered; whether you want to sing alone or in a group.

These are some of the most played songs at karaoke parlors across the country. To some, these undeniably huge anthems will carry a party to its climax; to others, they’ve been belted one or 15 too many times. Read the room and then dive in.

“I Wanna Dance with Somebody,” Whitney Houston

“Since U Been Gone,” Kelly Clarkson

“Piece of My Heart,” Janis Joplin

“I Believe in a Thing Called Love,” The Darkness

“Kiss From a Rose,” Seal

If You Can Actually Sing

“Love on the Brain,” Rihanna

Rihanna’s first notes of “Love on the Brain” are wispy and vulnerable—they reek of they whiskey that she knocked back in “Higher” and give the impression that she might not make it through the song. But she calmly gains momentum and power, mixing pathos and ecstasy, resulting in a modern soul classic and one of the towering musical accomplishments of the last decade. Replicate her epic ascent at your own peril.

Like “Love on the Brain,” “The Story” begins bottled-up then detonates furiously, turning into a vocal slalom and an emotional gut punch. Bonus points if you can nail Carlile’s plush quasi-yodeling.

“Angel Of the Morning,” Juice Newton

There’s a reason “Angel of the Morning” has been covered so many times, by Juice Newton, Nina Simone, Olivia Newton-John, the Pretenders and others: it’s a succinct and rapturous barn-burner. It’s also been featured in karaoke scenes in Modern Family and The Leftovers.

If you’re trying to make someone blush, this would be a pretty fool-proof way to do it. DeBarge’s playful and coquettish funk jam contains lyrics like “you send chills up my spine every time I take one look at you.” The combination of the deep bass and falsetto melody should be enough to make you irresistible (or at least elicit a few laughs).

“Give Me One Reason,” Tracy Chapman

“Give Me One Reason” doesn’t overwork itself: it just simmers, allowing you to imbue your own attitude and embellishments.

The herky-jerky bass guitar, the echoing snare drum, the shimmering horns and guitars, the militaristic backing vocals—there’s nothing modern about “Let’s Dance”—and for karaoke, that’s a huge plus. The song is an astonishing snapshot of 1983; it also happens to possess one of the most rousing and operatic choruses in pop history. Bust out your vibrato and get everyone on the dance floor.

“Here Comes Your Man,” the Pixies

“Here Comes Your Man” is a multivalent pick; it both signals your alternative rock bonafides while also nodding to an iconic karaoke film scene. There’s some skepticism about whether (500) Days of Summer has held up over the last decade, but Tom’s (Joseph Gordon-Levitt) drunken and impassioned rendition of this Pixies classic is unimpeachable.

“Best of My Love,” the Emotions

This upbeat disco anthem has one of the greatest bass lines ever; it deserves to be the song of any summer. There are fun call-and-response vocal parts, and the main melody gives you a chance to push the upper bounds of your register.

At once silly and swaggering, “Feels Like the First Time” is a song for taking the microphone out of its stand and lassoing it around, for doing a Mick Jagger strut across the room, for wailing furiously on an air guitar. The chorus is huge, but the best part is the maudlin bridge, which just begs to be dragged out. If you’re doing it right, you’ll hold every syllable of “neeeeever willlll agaaaaaaaain!” for just a little too long.

With its speckled guitar crescendoing into a spastic drop, “Titanium” feels like the de rigueur showstopper of the decade. Sia, known for mumbling her lyrics, sounds precise and luminous here. She sets an extremely high bar (in both pitch and quality) for you to reach.

Of all the meme songs to bust out during karaoke, this might be the least expected and the most fun. When Williams recorded it in 1949 it became a pillar of hillbilly music, as country music was then known. Last year, the song received a high-pitched breath of fresh air when an 11-year-old Mason Ramsey went viral for singing it at Walmart.

If You Struggle to Hold a Tune

“Chop Suey,” System of a Down

There are few greater thrills in life than watching a mild-mannered person fully commit to this bipolar heavy metal banger. The rapid-fire tongue-twisting verse, the melodramatic bridge, the mercurial mood swings, the formidable “RAHHH!!!!” after the chorus: the ingredients are all there for a legendary performance—the more over-the-top and off-key, the better.

Miss the old Taylor? This 2010 classic lacks the vocal theatrics of some of her recent work, but it’s much less about the music than the spunky and flippant lyrics—and as a diss song, it’s far more persuasive than “Look What You Made Me Do” or “I Forgot You Existed.” In order to most convincingly deliver the mean-girl lyrics (including the line “all you are is mean and a liar and pathetic and alone in life”), it probably helps to have a frenemy in the room.

“Kiss Me,” Sixpence None the Richer

Singer Leigh Nash barely raises her voice above a whisper or strays from a five-note melody cluster, so you don’t have to, either. Those washed-out guitars—and hopefully, the rest of the room—will do most of the work for you.

With a couple notable exceptions (including “Free Fallin'”), Tom Petty mostly stuck to the comfortable middle of his register, making his songs ideal for karaoke night. “Mary Jane’s Last Dance” is a particularly good choice, given that most of it isn’t really sung at all—it’s practically rapped, with many of the lines dopey enough to sound like they were free-styled (“oh my my, oh hell yes, you got to put on that party dress”).

“Cake By the Ocean,” DNCE

The muted guitar intro to this song resembles another karaoke favorite: Grease’s “Summer Nights.” But anyone expecting a different song likely won’t be disappointed for long, given how affable and infectious every part of this song is. The handclaps, the sunny guitar stabs, the “ah ya ya ya ya ahs”—it’s a nonsensical bop whose meaning is nonetheless crystal clear.

If you can get through all of the words of this epic American poem of discontent and catharsis, it almost doesn’t matter whether or not you hit the notes. Plus, growling Bruce impressions are always fun.

“Part of Your World,” The Little Mermaid

There are few Disney torch ballads that will lead you astray in karaoke, but the one that particularly hits the spot is this wistful anthropologist’s dream. There’s plenty of opportunity for pantomiming, and its stop-and-start quiz show energy encourages audience participation.

An even more angsty and explosive version of the Weezer karaoke favorite “Say It Ain’t So,” “El Scorcho” doesn’t so much wear its heart on its sleeve as on a giant handheld balloon. But while it’s rousing, it’s also laughably harmless. This is the soundtrack to unrealized teenage angst and apologetic chaos—of throwing chairs and then carefully putting them back in place and scrubbing the scuff marks off the floor.

“Drunken Angel” is a key end-of-night pick for when you might not be able to stand straight; a song in which vocal wobble is not a defect but a feature. It’s up to you to decide whether the chorus (“drunken angel / you’re on the other side”) should be filled with venom or beatitude.

If You Want to Sing With Friends

“Take Me Or Leave Me” from Rent

Duets don’t get much bigger than this raucous, full-throated riff-off, in which two archetypes, the ascetic and the siren, square off for supremacy.

“That’s What Friends Are For” by Dionne Warwick

What better for karaoke night than an extremely corny, extremely tender squad anthem recorded by Warwick, Gladys Knight, Elton John and Stevie Wonder on the heels of “We Are the World.” (Alternatively, a song of the same name from The Jungle Book is also a pristine posse cut.)

There are six distinct and memorable parts on this 2016 Fifth Harmony smash—so pass that mic around.

“Tonight You Belong to Me,” Patience & Prudence

Anyone who dismisses TikTok as a haven for insipid and immature inanity probably hasn’t seen one of the latest challenges making the rounds: a cappella renditions of this rosy 1926 composition. The song has drawn generation after generation back in with its buoyant simplicity—it was recorded in 1952, then 1956, then 1977, then several times since the turn of the millennium, including by Zooey Deschanel and Ben Schwartz in 2011. Its melody is timeless, and its sweet chasteness sets it apart from the rest of your average karaoke repertoire.

“Shallow” from A Star is Born

An essential no-brainer, and a song to end any karaoke night. After this one, drop the mic, pack it in and go home.

Unless you and your friends have an inside joke related to these overtaxed songs, it’s probably best to leave them for belting out in the car or the shower:

“I Want It That Way,” the Backstreet Boys 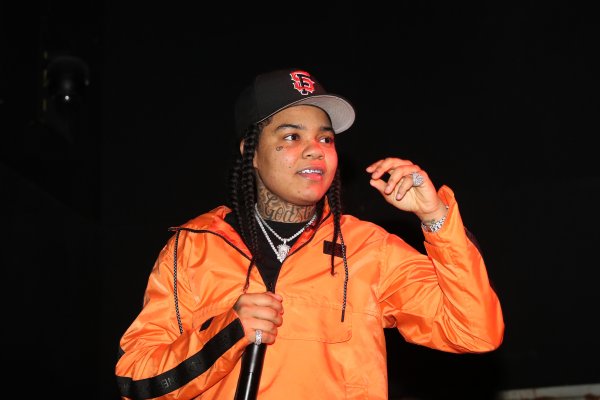 'I Busted Some Doors Down.' Rapper Young M.A On Her New Album, Homophobia and Breaking Boundaries
Next Up: Editor's Pick