4 Things We Learned From the New Documentary About Whitney Houston

As one of the most successful pop artists of all time, Whitney Houston was — and continues to be — one of the world’s most beloved voices. But her musical legacy has also been clouded by her personal struggles and tragic death at the age of 48 in 2012, chapters of her story that are explored in the new documentary Whitney: Can I Be Me.

Helmed by Rudi Dolezal and BAFTA winner Nick Broomfield — who delved into the untimely death of another iconic musician, Kurt Cobain, in the 1998 film Kurt & Courtney — the documentary is an in-depth look at the private life of a cultural icon. It crafts a heartbreaking narrative through found footage, including never-before-seen interviews, performances and clips that address everything from her intimate relationship with best friend Robyn Crawford to her tumultuous marriage to Bobby Brown.

As it opens in theaters on Aug. 18, and ahead of its Showtime debut on Aug. 25, here are the aspects of Houston’s story onto which Can I Be Me shines a light.

The documentary’s title speaks to the struggle Houston fought her whole life between her public persona and her true self. She was groomed from an early age to be marketable to white mainstream consumers, an endeavor spearheaded by her mother Cissy Houston and the producer Clive Davis, who discovered Houston as a teenager and helped catapult her to meteoric pop stardom. But the musical choices and respectability politics that catapulted her to mainstream success also backfired by making her less palatable to black audiences. In the late 1980s, for exmple, she was booed during the Soul Train Awards, with some audience members calling her “Whitey” instead of Whitney.

The film also focuses on how Houston’s success supported the livelihoods of many of her friends and family, with the singer choosing to work even to the detriment to her own health and well-being, especially as she became heavily addicted to drugs and alcohol. Her longtime bodyguard David Roberts, who was somewhat of an inspiration for her film The Bodyguard, insinuates in the film that the personal interests of the friends and family that she employed sometimes took precedent over her own welfare and sobriety.

She had an incredibly intimate relationship with her friend Robyn Crawford — of which some of her inner circle disapproved.

Whitney’s childhood friend Robyn Crawford was one of the star’s closest confidantes. The film addresses longtime speculation about a romantic relationship between Crawford and Houston, with the latter’s stylist Ellin Lavar noting that she thought that the singer might have been bisexual. “Robyn provided a safe place for her. Robyn loved her,” Lavar says in the film. “In that, Whitney found safety and solace.” The two remained close friends until Houston started a relationship with her eventual husband Bobby Brown. Brown and Crawford did not like each other and often fought, sometimes leading to blows.

According to the singer’s former security guard Kevin Ammons, Brown was jealous of the intimate relationship Crawford and Houston shared. “[Robyn and Whitney] had a bond and Bobby Brown could never remove Robyn,” he says. “He wanted to be the man in the relationship.” While Crawford eventually parted ways with Houston after heightened tensions with Brown, Brown himself admitted that Houston had no close friends after Crawford left and that she “would probably still be alive” if Crawford had still been in her life. Brown wasn’t the only one who didn’t like Crawford; Houston’s mother Cissy disliked her as well and often advocated for her to be fired. Cissy told Oprah, in a 2013 interview, that she would have disapproved of her daughter being in a lesbian relationship.

Brown and Houston had an intense (and at times toxic) relationship.

In one of the most poignant scenes in the documentary, Brown and Houston are seen playacting scenes from What’s Love Got to Do With It in their hotel room. Although the pair are having fun impersonating Ike and Tina Turner, it’s an eerie parallel to the tumultuous nature of their own relationship. Houston’s fame and success made Brown jealous. The film paints him as emotionally abusive, trying to reduce her self-worth in order to make himself feel better.

The documentary also reveals that while Houston relied on drugs before she met Brown, Brown turned to alcohol. Once the pair got together, they began using both substances together. The film also emphasizes how much Houston tried to make their relationship work, despite their emotional duress and Brown’s womanizing, suggesting that her religious upbringing was a driving force in her wanting to make the marriage work.

Houston’s bodyguard was fired when he tried to intervene with her drug addiction.

Roberts reveals in the documentary that after the singer’s 1999 My Love Is Your Love tour, during which he witnessed the star overdose, he filed an extensive report on Houston’s drug abuse to her management — largely her family and friends— and was fired immediately. “There’s no doubt in my mind, had that report been taken seriously, Whitney and Bobbi Kristina would still be here,” he says in the movie. Roberts contends that Houston’s daughter Bobbi Kristina’s untimely death at the age of 22 in 2016 was a direct result of this approach to Houston’s drug abuse. “She never had a chance,” he says. “She came along when things were only getting worse.” 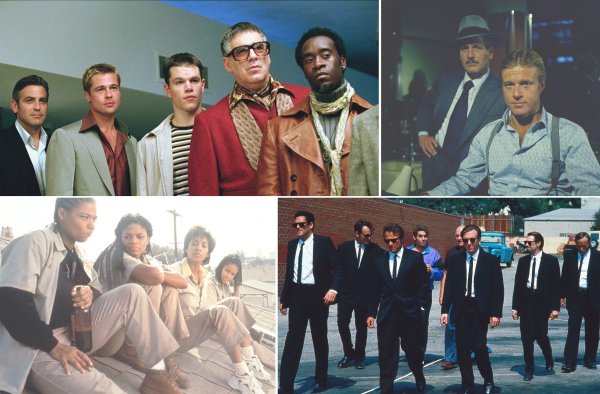 The 25 Best Heist Movies
Next Up: Editor's Pick