Review: On Lover, Taylor Swift Lays Down Her Armor

Way back in 2010, singer-songwriter Taylor Swift released her third studio album, Speak Now. She wrote every song on the album, without any co-writers, like a response to those who might suggest she was anything other than an artist in sole control of her career. On one song, the poppy “The Story of Us,” she sang a lyric that reads now like a prediction: “I would lay my armor down if you’d say you’d rather love than fight.”

The world has changed a lot in the last decade, as has Swift. But now, like a phoenix from the ashes—or maybe more like a kaleidoscope of butterflies from a cobra—she’s reemerged from a quagmire of black-green sequins and faux-rapping to remind us that she really is a lover at heart.

Her seventh album, Lover, out Aug. 23, is its own kind of megalithic statement, a sharp rejoinder to the critics who have characterized her as petty or drama-seeking. Its whopping 18-track length spans the gamut from earnest, twangy love songs to unapologetically bubblegum anthems. But what its songs all share is glossy production and an energy that feels like pure distilled Swift: A pop star who—over a career that’s spanned thirteen years, seven albums and at least a dozen songs that have become immortalized in pop culture iconography—has proven herself one of her generation’s strongest songwriters and savviest public-relations navigators.

The album’s opener, “Forget That You Existed,” sets the tone; it’s a bouncy ode to the moment after a break-up or fight when you realize you’re no longer thinking about the other person at all. The song is practically a mission statement for what will follow: There will be no revenge anthems here, no attempts to get the last word. (Unless you count the song itself as an attempt to get the last, last word.) There are three tender love songs, and almost every track boasts clever couplets and witty turns of phrase, often tucked modestly away into the second verse. The celebration of Swift’s sense of humor serves as a refreshing departure from the seriousness of her reputation persona. The album’s fourth track, “The Man,” imagines how her press coverage would be different if she had a Y chromosome. (Her dating history would make her—you guessed it—The Man, like “Leo in San Tropez.”) And Swift stuffs “London Boy” with more tongue-in-cheek Briticisms than a student back from a semester abroad in London as she declares her love for an English lad who a less disciplined critic would remind you is almost certainly Swift’s current beau, the actor Joe Alwyn.

With the bright, jangly standout “Paper Rings” and the heart-wrenching Dixie Chicks collaboration “Soon You’ll Get Better,” Swift also teases a possible, and very welcome, tilt back to her country roots. Fans who joined a Swift early listening session correctly identified this album as a lovechild between Speak Now and 1989, lifting the personal lyricism from the former and the synth-pop production from the latter.

Ironically, the album’s least compelling spots are its singles, which are so self-consciously catchy it seems as though Swift might have oversteered after reputation only elicited one #1 Billboard single, compared to three from 2014’s 1989. (Unfortunate timing for Swift that this summer, the #1 spot was super-glued to Lil’ Nas X’s “Old Town Road.”) “ME!,” a bubble-gum duet with Panic! At the Disco’s Brendon Urie, features nursery-rhyme repetition— yes, it will get stuck in your head, but only through a war of attrition. The similarly peppy single “You Need to Calm Down” is a well-intentioned play at LGBTQ advocacy, but if you’re looking for cheerleader chants, turn instead to the insidious, undeniable “Miss Americana and the Heartbreak Prince,” in which some of Swift’s most poetic lyricism is juxtaposed against hauntingly perky cheer-squad background vocals: “Go! Fight! Win!”

One of Swift’s primary gifts as a songwriter is her ability to conjure lyrics that are at once both intensely specific and also universally relatable. Her songs invite the listener to share in her glittering public life, as she dusts her lyrics with clues that die-hard fans can link back up to moments they’ve already seen through the lens of her much scrutinized-celebrity. In that way, her music is like Swift herself offering up a private director’s commentary on her public persona, lifting a curtain to reveal the three-dimensional interiority behind two-dimensional paparazzi photos.

But those same songs have also been lip-synced in bedrooms around the world for the last decade, applied to romantic scraped knees and bad break-ups and the lovely, ordinary love stories that occur every day, almost always without a famous heartthrob’s involvement. That’s the exquisite duality of her music: it operates as an object of tabloid fascination, granting us a rare, intimate peek into the inner life of an A-lister, while also gifting us with an arsenal of cathartic bridges to belt in the shower every time our hearts are broken by a boy we knew was trouble when he walked in.

When you take away our collective obsession with her dating history and our minute-to-minute reporting of whatever “feud” she ignited by liking, or not liking, someone’s post on Instagram, we’re left only with Swift, lover, who’s returned to technicolor with an album filled with big-hearted love songs and diary-honest lyrics. She sounds just right. 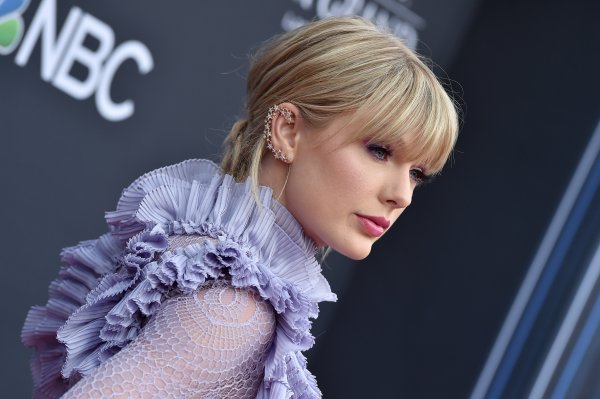