Genre is dead; all hail the new masters of global, category-defying hits from artists old and new. In 2019, the singles have been creative and surprising, from the social-media-boosted country-trap chart success of Lil Nas X‘s “Old Town Road” to Latin-world collaborations that run the gamut of musical styles. There’s room for more traditional hip-hop and pop, too—welcome back, Jonas Brothers — but they’re joined by rising stars, like Lizzo, Rosalía and Cautious Clay, who have plenty to say in their own way.

On her debut album Kisses, Anitta, Brazil’s biggest pop star, shows off her strengths as a trilingual artist—she sings in Spanish, Portuguese and English—capable of swinging from Brazil’s hard-charging baile funk to tender bossa nova. But it’s on “Rosa” that she most comes into her own: it’s a trap-pop track boosted by the appearance of bachata-R&B artist Prince Royce, on which Anitta makes the most of her alluring voice, singing in expressive Spanish that doesn’t need translation. With its moody synth layers and sensual duet structure, it’s a song that also successfully places traditional Latin rhythms in a fresh contemporary context. — Raisa Bruner

“I don’t need it, I don’t want it,” Cautious Clay sings on “Sidewinder,” the first song on his excellent EP “Table of Context.” But while the Brooklyn singer-songwriter’s lyrics might be apathetic, his yearning vocal performance suggests otherwise. “Sidewinder” is a harrowing and apt representation of love in the digital age, in which desire is often concealed behind ambiguity and solitude. As Clay sings of sorrow, “closed hands” and “lost ties,” his elastic voice slips acrobatically between gravely lows and feathery highs, coalescing into one of the great earworms of the year. — Andrew R. Chow

“Why don’t I do it for you?” wails the experimental British artist FKA twigs on the softly unsettling “Cellophane,” a song that lays heartbreak bare. Rendered in minimalist, twanging piano chords and tightly-wound vocals, it swings from breathy devastation to high notes of carefully controlled keening. Twigs has always walked the tightrope of electronic pop and off-kilter R&B; “Cellophane” marks one of her most emotionally-charged releases to date, a ballad that drips with raw-edged pain. It also marks her return after nearly three years of absence from music, foreshadowing a new openness in work to come. — R.B.

While California hip-hop has witnessed a fearsome revival over the last few years, its community was struck by tragedy when Nipsey Hussle, one of its titans and fiercest advocates, was shot dead in Crenshaw in March. “West Coast,” a posse cut featuring four of the state’s hungriest stars, is a show of resilience, a call to unity, and a strong indicator that this renaissance isn’t fading any time soon. YG, one of Nipsey’s close friends and a Blood affiliate, proudly rhymes next to the Crip-affiliate Blueface, who brings his signature squeaky absurdism. They are joined by two Bay Area traditionalists: the suave, pop-minded G-Eazy, and ALLBLACK, who hypercharges the track with freight train intensity. — A.R.C.

You wouldn’t accuse “Rebota” of being complex. Guaynaa, a rising Puerto Rican rapper, repeats the song’s title—which means “bounce” in Spanish—over and over, on top of a minimalistic reggaeton beat that barely uses any tonal instruments.

But “Rebota” succeeds wildly in its simple mission: to get bodies moving. The song distills reggaeton to its purest composite parts, with Guaynaa locking into an infectious flow and gliding over the complicated syllables with the ease of an Olympic skier. The song’s ruthless single-mindedness has earned it a co-sign from Bad Bunny and a cool 148 million views on YouTube. — A.R.C.

Brothers Nick, Joe and Kevin Jonas started off as Disney Channel stars in 2005. Fourteen years later—and six years after taking a temporary hiatus from their group status—they reunited with “Sucker,” the single that kicked off their new career era. “Sucker” is a sly, nimble slice of pop, all handclap beats and whistle breaks, with vocals from the three brothers coming in precise falsetto layers. The result is deeply infectious: “Sucker” is the Jonas Brothers’ first number-one single of their career, and serves as a reminder of the timeless appeal of old-school boy band style. — R.B.

It seems too strange to be true: an unknown teenager, sleeping on his sister’s floor, whips the nation into a frenzy with a horse song, defeating Taylor Swift, Justin Bieber and Ed Sheeran on the charts and throwing the supposed supremacy of long-established gatekeepers—from the Billboard charts to Nashville radio to major labels—into disarray.

Lil Nas X didn’t get here through a random fluke, but through shrewd calculation. He fanned the flames of an online cowboy craze and boosted his reach with a social media fluency, a cunning sense of humor, and a perfectly-chosen saddle partner in Billy Ray Cyrus. And perhaps most importantly, he wrote the song’s undeniably monstrous hook, which is catchier than anything the big pop machine has churned out in recent memory. He’s a new kind of renegade on a new kind of frontier. — A.R.C.

Lizzo perfects the art of the self-love dance anthem on “Juice,” the lead single off of her funk-filled, uplifting album Cuz I Love You. With “Juice,” the soulful singer, rapper and flutist delivers one of the year’s most joyful, carefree tracks, a throwback tune that feels fresh thanks to Lizzo’s playful delivery and on-point lyrics. “Mirror, mirror on the wall, don’t say it, ’cause I know I’m cute,” she deadpans—turning that old fairy tale trope into an affirmation of confidence and independence. Lizzo has become an ambassador for everything from body positivity to genre-blending; it’s hard not to buy into her brand of bold bounce when it comes in “Juice” form. — R.B.

DJ and producer Mark Ronson is one of music’s more high-profile collaborators lately, contributing to the Oscar-winning “Shallow” from A Star Is Born with Lady Gaga and working with artists like Miley Cyrus on “Nothing Breaks Like a Heart” and Dua Lipa on “Electricity.” (He is also one of the creators of the Bruno Mars smash hit “Uptown Funk.”) On “Late Night Feelings,” Ronson tapped the vocals of Swedish pop singer Lykke Li for a bittersweet dance track; where her sound naturally veers to the dark side, Ronson’s stays in the lane of bouncy jazz and funk. The resulting combination is refreshing and distinctive, Li’s voice floating lightly above his warm composition as she muses about relatable late-night doubts. — R.B.

The Spanish artist Rosalía has proved herself chameleonic during her swift ascent over the last year: she’s handled James Blake ballads, voluptuous dancehall anthems and mournful Justin Timberlake interpolations with equal aplomb. On “Con Altura,” she meets the reggaeton king J Balvin on his home turf, trading bars with him with an unflinching poise that borders on frigidity. “Con Altura” sounds like dembow, hip-hop and flamenco, with middle eastern influences sprinkled in. That is to say, it sounds like the future of global pop music. — A.R.C. 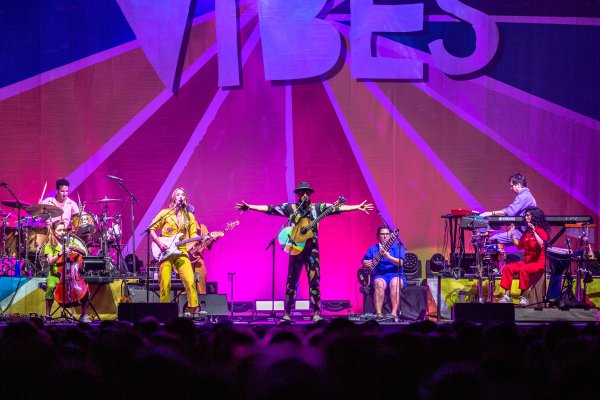