All 73 Songs Sia Has Written for Other Artists, Ranked

You can identify a Sia song a mile away: that soaring, uplifting chorus! The vivid metaphors! The message of empowerment and triumph! Though the “Chandelier” singer shuns the spotlight in her solo career, Sia has become one of pop music’s most in-demand songwriters, with credits for Beyoncé, Britney Spears and Katy Perry to her name. She’s also ridiculously prolific, having just released an album called This Is Acting that features rejected songs she originally wrote for the likes of Adele and Rihanna.

Don’t feel too bad for her, though, regarding that rejection. Her new record may be filled with songs taken from the cutting room floor, but she’s supplied A-list divas with dozens and dozens of tracks since she devoted herself to writing for others around five years ago. Her discography is a who’s who of pop music greats, and it’s impressive in its scope: there are songs for the clubs; there are songs for crying under the covers; there are songs about getting it on. Her catalog also got us thinking: what makes a quintessential “Sia song”? Which ones are the best? And is it possible to rank them all?

(Read next: Review: Sia Finds Treasure in Other Stars’ Trash on This Is Acting)

This ordered list includes officially released songs that were written or co-written by Sia but recorded by another artist—tracks on which Sia sang lead or featured vocals were not included. (That means no “Titanium.”) Songs for which an alternate, Sia-only version was later or simultaneously released were allowed, as were songs for which Sia provided backing vocals. (It’s not hard to find Sia on many of these songs if you listen closely.)

15. “Expertease (Ready, Set, Go)” by Jennifer Lopez
Lopez isn’t the vocal powerhouse often associated with Sia songs, but it’s her delivery that makes listening to this A.K.A. deep cut feel like eavesdropping on an intimate date-night. The titular pun is almost too obvious to be titillating, but we’ll be damned if Lopez doesn’t make this bedroom invite sound legitimately sexy—how do we RSVP, J. Lo?

14. “Opportunity” by Quvenzhané Wallis
Updating a musical as iconic as Annie is a daunting task, but Sia didn’t just rearrange the classics for the 2014 big-screen adaptation—she also wrote three new songs that you can bet your bottom dollar hold their own among the originals. Hearing Wallis break into that first chorus is near-guaranteed to produce a smile—and remember, you’re never fully dressed without one.

13. “Diamonds” by Rihanna
Pop’s reigning bad gal didn’t do much with this glistening No. 1 smash—Rihanna followed the demo’s blueprint so closely that Sia thought it was her own vocals on the final product. But that’s because Rihanna didn’t have to: the song’s sky-high chorus already rises to the near-top of Sia’s hit list. (And you still have Rihanna to thank for making her pronunciation of diamond as memorable as what she did to the world umbrella.)

12. “Making the Most of the Night” by Carly Rae Jepsen
The trope of the Manic Pixie Dream Girl is bad for movies, but evidently great for pop songs: here comes Carly Rae Jepsen, swooping into your life for a spontaneous, after-house adventure designed to get you saying yes to life. As she tries to turn your night around, the song’s sparkling melodies are just as transformative in their charms.

11. “Chasing Shadows” by Shakira
There’s a lot to forget about Shakira’s self-titled 2014 album—including the meh Rihanna collaboration “Can’t Remember to Forget You”—but this effervescent synth-pop track courtesy of Adele producer Greg Kurstin could have been the one to jog your memory if it hadn’t been relegated to the deluxe edition.

10. “Get Over U” by Neon Hitch
No shade to Neon Hitch—okay, maybe a little shade—but this glitchy paean to triumphing over a devastating breakup would have made a much bigger impact had it ended up in the hands of a singer with more star power. It’s textbook Sia in all the right ways—a pep talk in pop-song form.

9. “Blank Page” by Christina Aguilera
Christina Aguilera teamed up with Sia before it was trendy to do so—the pair co-wrote several songs on Aguilera’s oft-maligned Bionic back when Sia was known for songs like “Breathe Me,” instead of epic dance-pop. The pair’s best work together, though, came a few years later on Aguilera’s Lotus LP, where this vulnerable mea culpa earned “Beautiful” comparisons.

8. “Brightest Morning Star” by Britney Spears
Britney Spears is just like us—she has bad days. And when she does, she turns to her faith: Sia came up with this bonus cut from 2013’s Britney Jean after Spears requested a song about “how Jesus found his way…a kind of gospel song that wasn’t ramming it down your throat.” Some of the lyrics border on pure cheese, but that chorus will guide you home, no matter your religion.

7. “My Heart Is Open” by Maroon 5 featuring Gwen Stefani
Sia has said that Maroon 5 frontman Adam Levine took this song in a completely different direction from her original vocal demo, but it’s understandable why she didn’t use her clout to push for a more faithful version. He and duet partner Gwen Stefani squeeze plenty of emotional mileage out of the song’s amorphous yeah-yeah-yeah hook.

6. “Double Rainbow” by Katy Perry
Knowing what Perry’s capable of, a song titled “Double Rainbow” could have been one big hyperchromatic double-entendre. Instead, it’s the opposite of what we’re used to from the singer so flashy she become a human firework during last year’s Super Bowl halftime show: a warm, understated ballad that feels like a worthy consolation prize after Perry passed up some of Sia’s best-known tunes.

5. “Kiss Me Once” by Kylie Minogue
Talk about a wonder from down under: the “Can’t Get You Out of My Head” diva (and fellow Australian) tapped Sia to executive produce her 2013 album, Kiss Me Once. Together, they cooked up a title track so euphoric it makes giving into sexual tension sound downright holy—no wonder there are church bells going off.

4. “Battlefield” by Lea Michele
Michele’s solo debut, Louder, didn’t get the kindest reviews when it dropped in 2014, but perhaps an EP of only the Sia cuts would have garnered more audible praise. The big-voiced Scream Queens star is about a perfect a match as you can get for Sia’s songwriting: that wail she lets out right before the chorus sounds like she’s about to burst into tears.

3. “Boy Problems” by Carly Rae Jepsen
Strap on your skates for a roller rink-ready jam so bubblegum-sweet that Jepsen almost left it off her hipster-beloved E•MO•TION, one of 2015’s best albums. Yes, that’s Sia’s voice in the beginning telling Jepsen to put up or shut up when it comes to her romantic woes, but if listening to her issues is as addicting as listening to this song, Jepsen can call us to vent any day.

2. “Perfume” by Britney Spears
Whether it’s stripped down or dressed up in shiny synths, this love-triangle ballad is the most human Spears has sounded in a long time. The tale of woman-versus-the-other-woman is a classic one, but Sia finds a new source of empathy in its narrator’s lack of anger: Britney doesn’t want to key your car, she just wants to know she’s not crazy, and that might be the most heartbreaking thing about it. Spears may not succeed at staking a claim on her man, but she for sure snags one of Sia’s finest.

1. “Pretty Hurts” by Beyoncé
Pop music has no shortage of flaws-and-all anthems, but Sia didn’t settle for boilerplate preachiness about rejecting unfair beauty standards here. Instead, she wrote what sounds like a rousing personal confession of a lifetime of body-image struggles—even when it’s coming from a performer whose pursuit of perfection is so steadfast she’s practically annexed the word “flawless” into her brand. This one takes the crown without falling down.

This post has been updated to include additional songs. 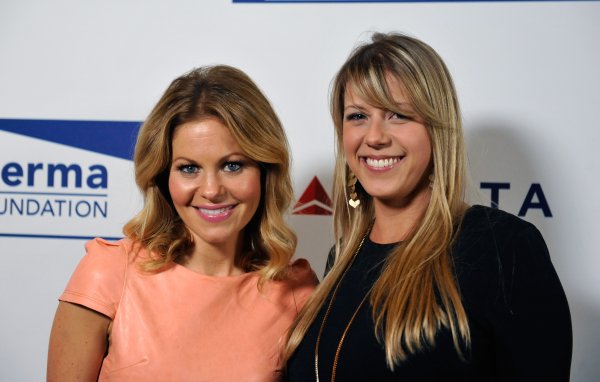 Watch the First Trailer for Fuller House
Next Up: Editor's Pick