The U.S. Open finals are here.

Canada’s Bianca Andreescu defeated Serena Williams in the women’s singles final on Saturday, Sept. 7 in Arthur Ashe Stadium. Williams had the chance to notch her 24th Grand Slam women’s singles title — and tie Margaret Court’s record for the most women’s singles Grand Slam wins. But Andreescu, a 19-year-old upstart who knocked stars like Caroline Wozniacki and Taylor Townsend out of the tournament, won the match 6-3, 7-5. It’s her first Grand Slam title.

The two-week tournament had its share of upsets and surprises — even ahead of Williams’ loss — with several big stars falling earlier than expected. Federer, one of the favorites to win the tournament, lost in the men’s singles quarter-finals on Sept. 3 to Grigor Dimitrov, ending hopes that Federer and Nadal would meet in the final.

Naomi Osaka, the reigning U.S. Open women’s singles champion, lost in the fourth round to Switzerland’s Belinda Bencic. Meanwhile, Novak Djokovic, last year’s U.S. Open men’s singles champion, retired with an injury during his fourth-round match to Stan Wawrinka, losing his opportunity to repeat his title. Coco “Cori” Gauff, the 15-year-old phenom who became the breakout star at Wimbledon, made it to the third round of the U.S. Open before losing to Osaka.

The 2019 U.S. Open, taking place at the USTA Billie Jean King National Tennis Center in New York, is airing on ESPN this year. The competition began with the Qualifying Tournament on Aug. 19 and ends with the men’s singles finals on Sept. 8.

At last year’s tournament, Osaka defeated Williams in a controversial final to earn the women’s singles title — making her the first woman from Japan to earn a Grand Slam singles title. Most recently, though, Williams lost to Simona Halep of Romania at the 2019 Wimbledon singles final in July. Halep lost in the second round of the U.S. Open.

First held in 1881, the U.S. Open is one of the four major tennis tournaments that make up the annual Grand Slam titles, along with the Australian Open, French Open and Wimbledon.

With a Hulu Live account, U.S. Open fans can catch all matches on ESPN from any computer and most smart TVs. For Hulu Live, you need a subscription to regular Hulu and the Live TV add-on. That plan costs $44.99 per month, but you can get the first week free. So, if you want to watch a particular match for free, make sure you sign up for Hulu Live at the right time.

With a Sling TV account, you can stream ESPN’s live broadcasts of every U.S. Open match. While the online live TV subscription service is not free, Sling TV offers a 40 percent discount for new users in the first month. (Sling TV users with the “Sling Orange” package can view ESPN and ESPN2.)

How can I watch the U.S. Open with cable?

U.S. Open matches will be broadcast exclusively on ESPN and ESPN2 this year for American viewers. The ESPN app will also feature live streams of this year’s matches.

With your cable provider login, you can watch ESPN live on the network’s website.

The Tennis Channel will be airing “preview and highlight shows, as well as extensive match encore programming,” according to the U.S. Open’s TV schedule.

When are the men and women’s singles finals?

Naomi Osaka of Japan celebrates with the championship trophy after winning the Women's Singles finals match against Serena Williams of the United States on Day Thirteen of the 2018 US Open at the USTA Billie Jean King National Tennis Center on September 8, 2018 in the Flushing neighborhood of the Queens borough of New York City.
Chris Trotman—Getty Images for USTA

Write to Rachel E. Greenspan at rachel.greenspan@time.com and Samantha Cooney at samantha.cooney@time.com. 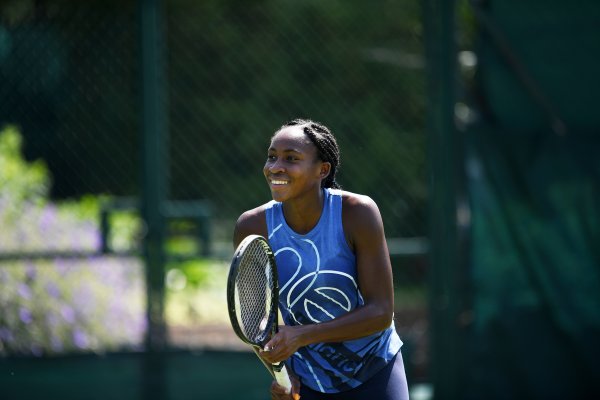 For Teen Tennis Phenom Coco Gauff, Wimbledon Is Just the Beginning
Next Up: Editor's Pick