Athletes and celebrities alike have shown support for Serena Williams on social media after an umpire gave her multiple violations during Saturday’s U.S. Open final.

They have called out his actions as being sexist, racist and just plain inappropriate at such a crucial point in a championship match.

“When a woman is emotional, she’s ‘hysterical’ and she’s penalized for it,” King tweeted. “When a man does the same, he’s ‘outspoken’ and there are no repercussions.”

Ramos issued three violations against Williams — which will cost the tennis star $17,000 — towards the end of the U.S. open final, which she lost to 20-year-old Naomi Osaka. The violations were for coaching (supposedly Ramos saw Williams’ coach signaling to her during a game), breaking her racket and behavior Romas deemed “verbal abuse.” Many believe his violations impacted the ultimate outcome of the championship match.

His controversial calls were not only a blow to Williams’ legacy — who would have tied Margaret Court’s all-time record of 24 Grand Slam titles — but also cast a shadow over Osaka’s win, which should have been a historic moment for the young athlete. She is the first Japanese player to win the U.S. Open.

Public figures on social media also pointed out that umpires have given warnings, or no violations at all, to male players who have argued similarly in the past.

Others championed the camaraderie between the two players and the example of support that was shown.

Others widely shared Sally Jenkin’s op-ed in the Washington Post, in which she said that the umpire “abused his authority.”

“Ramos took what began as a minor infraction and turned it into one of the nastiest and most emotional controversies in the history of tennis, all because he couldn’t take a woman speaking sharply to him,” wrote Jenkins. “Male players have sworn and cursed at the top of their lungs, hurled and blasted their equipment into shards, and never been penalized as Williams was in the second set of the U.S. Open final.” 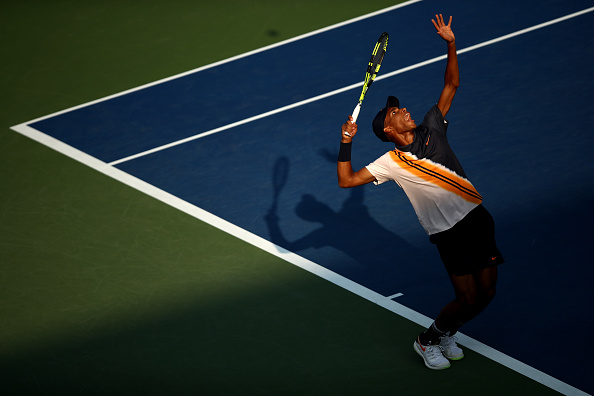 U.S. Open Player Hugs It Out With Rival After He Was Forced to Retire
Next Up: Editor's Pick