In a new essay for ‘Harper’s Bazaar,’ Serena Williams has addressed the controversy surrounding her performance in the U.S. Open final last year, when she lost to tennis player Naomi Osaka.

Williams, who holds records for medaling in the Olympics and winning 39 Grand Slam titles, described feeling “defeated and disrespected” by the incident.

During the second set of the September 2018 match, the umpire, Carlos Ramos, gave Williams a violation because he believed he saw her coach signaling her, which is against the rules of tennis. As she said at the time, Williams writes in the essay that she wasn’t looking for signals. “I don’t cheat to win. I’d rather lose,” she said. (Her coach later did say that he was trying to signal her, but didn’t think Williams ever saw him. Williams has disputed her coach’s account, and said she “didn’t understand” what he was referring to.)

She returned to the game “frustrated,” she wrote — and promptly lost another point to Osaka. At this point, she slammed her racket on the ground which, while relatively common among athletes, is explicitly banned. She was issued another violation. At this point, Williams wrote that she felt, “passionately compelled to stand up for [herself]” and demanded an apology from the umpire. Instead, she was issued a third violation, causing her to lose the game on a technicality.

After the match, Ramos said he was “sure of his performance” as umpire.

In her essay Williams reflects on the aftermath, and its impact on her:

While the audience had booed Osaka throughout the match, and particularly at its conclusion, Williams remained supportive of her opponent. Williams hugged her after the match, and admonished the crowd. “I know you guys were here rooting, and I was rooting, too, but let’s make this the best moment we can,” she said in a press conference after the match. “Let’s not boo anymore. Let’s get through this.”

“I’m sorry it had to end like this,” Osaka said of the match.

Williams also stressed in the piece that she was also upset that the events took attention away from Osaka:

She wrote that she later apologized to Osaka, who replied in turn offering encouragement for Williams to continue “trailblazing.” Williams described being moved to tears by this response. “We are not allowed to have emotions, we are not allowed to be passionate. We are told to sit down and be quiet, which frankly is just not something I’m okay with,” she concludes. “It’s shameful that our society penalizes women just for being themselves.” 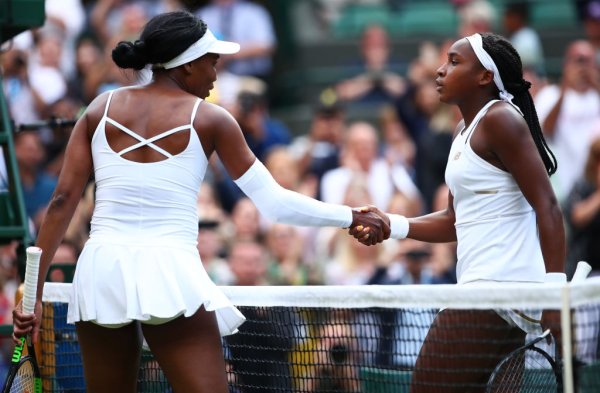 Is Wimbledon 2019 the Year the Young Strike Back?
Next Up: Editor's Pick