Belgium's Greet Minnen (R) and Belgium's Alison van Uytvanck talk during their women's doubles second round match on the fifth day of the Wimbledon Championships in southwest London, on July 5, 2019. The pair made history as the first ever gay couple to compete together at the tournament.
ADRIAN DENNIS—AFP/Getty Images
By Madeline Fitzgerald

When Alison van Uytvanck and Greet Minnen stepped onto the court at Wimbledon on Tuesday, it was their first time playing doubles together in a grand slam tournament match.

Off-the-court, however, they have been paired for three years.

Belgians Minnen and van Uytvanck made history by being the first out gay couple to ever play together at the famed tennis tournament in London, England. The two were victorious over British players Katie Swann and Freya Christie on Wednesday.

“We [would like to] see more people coming forward and saying ‘It’s OK,’” van Uytvanck said after the match. “I think people would have more confidence.”

This is not the first time the couple has made headlines at Wimbledon. Last year, after defeating then-reigning Wimbledon champion Garbine Muguruza to reach the third round of the tournament, van Uytvanck immediately headed to kiss her girlfriend sat in the stands. “I know it was a big deal but we just didn’t think about it,” said Minnen in an interview with the Telegraph. “She had just made the biggest win of her career and I was so happy and not thinking in that moment.”

While the number of gay athletes in the sport is still low, included in their numbers are tennis legends. Billie Jean King, famous for her defeat of Bobby Riggs in the 1973 “battle of the sexes” was outed as a lesbian in a 1981 lawsuit. Martina Navratilova came out as a bisexual in a 1981 interview, though she has since described herself as a lesbian. And in 1976, transgender woman Renee Richards made history when she sued the US Tennis Association and won so she could compete in the Women’s U.S. Open.

In addition to van Uytvanck and Minnen, two other out gay women — Johanna Larsson of Sweden and Richel Hogenkamp of the Netherlands — competed in this year’s singles tournament.

Among male players, however, being out is still a rarity. American Brian Vahaly is the only known gay male tennis player, and he didn’t come out until ten years after he retired from professional tennis. Vahaly previously told the Telegraph that when he was playing professionally he, “heard homophobia all the time – it was part of the culture”

“Women are coming out more easily than men,” said van Uytvanck. “I hope we are something that people can look up to, like a role model to come out.”

“I just hope it will be even better in the next few years,” Minnen added, “and everyone can talk about it.”

The pair lost in the second round of doubles to Chinese pair Chan Hao-ching and Latisha Chan. Minnen, however, remained positive, posting on Instagram, “Wimbledon is over for us but I enjoyed every second off it! Thank you for playing with me [van Uytvanck].” 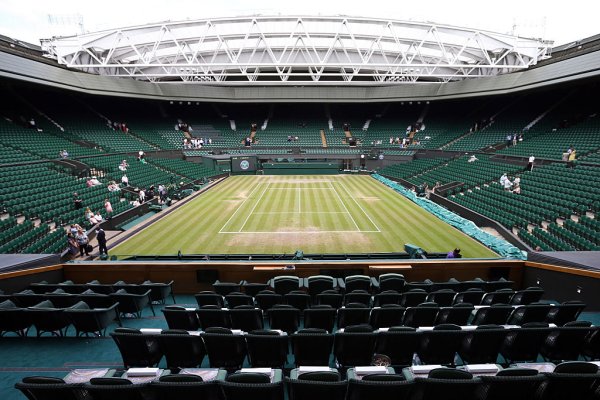 Here's How to Watch Every Wimbledon 2019 Match for Free
Next Up: Editor's Pick