Naomi Osaka of Japan looks on during the women's singles fourth round match against Aryna Sabalenka of Belarus on Day Eight of the 2018 U.S. Open at the USTA Billie Jean King National Tennis Center on Sept. 3, 2018.
Julian Finney—Getty Images
By Laignee Barron

Last year, Naomi Osaka commanded the world’s attention when she bested the U.S. Open’s defending champion Angelique Kerber in a stunning upset in the very first round. This year, the 20-year-old upstart has a shot at claiming the title herself as she challenges six-time champion Serena Williams in a historic final on Saturday.

In what Osaka termed her “dream match” against her idol, Saturday’s game pits tennis’ rising star against one of the game’s ultimate greats — if Williams wins she would tie Margaret Court for the overall record of 24 Grand Slam singles titles.

The two have competed only once before, and it’s the newcomer who holds the upper hand. As Serena herself put it, Osaka is “a really good, talented player. Very dangerous.”

Ahead of Saturday’s face off, here’s what to know about the new kid on the block.

Naomi Osaka of Japan celebrates a match point in the WTA final over Daria Kasatkina of Russia during the BNP Paribas Open on March 18, 2018 in Indian Wells, California.
Harry How—Getty Images

A first for Japan

For her country, Osaka has already succeeded in a major milestone: She is the first Japanese woman to reach the final of any Grand Slam. And she’s currently her country’s top-ranked player.

Yet in Japan, where racial homogeneity is prized and ethnic background comprises a big part of cultural belonging, Osaka is considered hafu or half Japanese. Born to a Japanese mother and a Haitian father, Osaka grew up in New York. She holds dual American and Japanese passports, but plays under Japan’s flag.

Some hafu, like Miss Universe Japan Ariana Miyamoto, have spoken publicly about the discrimination the term can confer. “I wonder how a hafu can represent Japan,” one Facebook user wrote of Miyamoto, according to Al Jazeera America’s translation.

For her part, Osaka has spoken repeatedly about being proud to represent Japan, as well as Haiti. But in a 2016 USA Today interview she also noted, “When I go to Japan people are confused. From my name, they don’t expect to see a black girl.”

On the court, Osaka has largely been embraced as one of her country’s rising stars. Off court, she says she’s still trying to learn the language.

“I can understand way more Japanese than I can speak,” she said.

In her press conferences, which for now are English only, Osaka has earned a reputation for her youthful candor and nerdy sense of humor.

In response to a reporter asking about her ambitions, she said, “to be the very best, like no one ever was.” After an awkward pause, she clarified, “I’m sorry; that’s the Pokémon theme song. But, yeah, to be the very best, and go as far as I can go.”

At Indian Wells this year, where Osaka stunned her higher-ranked opponents and claimed victory after searing past the world’s number one Simona Halep in the semis and besting Daria Kasatkina in the finals, she proved herself no longer just the underdog. She then proceeded to give what she described as “the worst acceptance speech of all time.”

“Hello, hi, I am—okay never mind,” it began, before a litany of thank you’s petered out into giggles.

But don’t let her soft-spoken persona or goofy interviews fool you. On court, Osaka brings the heat, uncorking both ferocious power and an aggressive baseline game.

Naomi Osaka of Japan serves during day two of the Rogers Cup at IGA Stadium on Aug. 7, 2018 in Montreal, Quebec.
Minas Panagiotakis—Getty Images

Earlier this year, Osaka reveled a four-word mantra keeps her steady through tough matches: “What would Serena do?”

Her idolization of the 23 Grand Slam-winning titan is well-known.

When the two played in Miami in March, six months after Serena nearly died giving birth, Osaka won. Then she Instagrammed a photo of her shaking hands with her idol, captioned only, “Omg.”

After Osaka cleared the U.S. Open semis on Thursday and it became clear she was not only headed to her first Grand Slam final but was also about to face her hero once more, she was asked if she had anything to say to Serena. Her message? “I love you.”

This post has been updated to remove an incorrect reference to the history of U.S. Open final competitors. 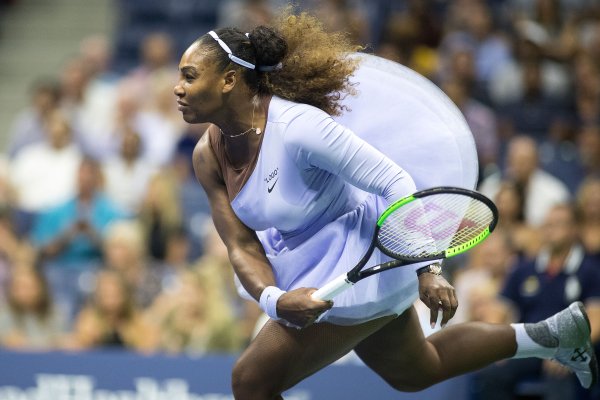 Serena Williams in U.S. Open Final a Year After Near-Death
Next Up: Editor's Pick