15-Year-Old Cori Gauff Lost at Wimbledon—But We Will Probably See Her Again. Here’s What to Know About Tennis' New Star

In the hard-fought match, Gauff struggled at the offset, losing the first set. And despite gaining back some ground, Gauff could not pull out a win against Romania’s Halep. She struggled with stomach issues during the game, according to statements made during her post-game press conference. WTA Tennis reported that Halep won 70% of the points at the net.

“I learned a lot and I’m really thankful for this experience,” Gauff said during her press conference after the loss. “I think I just need to go back to work, and keep working hard, and get ready for my next couple tournaments.”

In the third round on Saturday, Gauff defeated Polona Hercog in three sets that solidified her standing as a “player to watch” in the tennis world to reach the Grand Slam tournament’s fourth round. She beat Magdaléna Rybáriková in straight sets, 6-3 6-3, last Wednesday. She also defeated Venus Williams, the No. 44 player in the world in straight sets, 6-4 6-4, last Monday, which made her the youngest woman to win a Wimbledon match since 1991. Gauff also became the youngest woman to qualify at Wimbledon.

Despite her loss, Gauff has garnered a lot of enthusiastic support. Serena Williams has said that she thinks Gauff is “definitely on a different level” and called her “totally capable and ready,” according to Business Insider. Chris Evert, 18-time Grand Slam singles champ, told the New York Times, “No matter how she does the rest of the way, she’s already won our hearts.” Even Michelle Obama tweeted, “Coco is terrific!” after she came back to defeat Hercog last week.

Who is Cori Gauff?

Gauff’s record-breaking career has already earned her an international following. She’s adding youngest Wimbledon qualifier to a list of other youngest-ever’s — at 13, she was the youngest to reach the U.S. Open girl’s final and at age 15, she was the youngest female to win in a qualifying match in the French Open. Her tennis career began at age 8 and she ranks No. 313 in the world.

Gauff follows in the footsteps of Venus and Serena Williams, who Gauff’s family and coaches credit for paving the path for a young black teenage girl. Originally from Atlanta, Gauff now lives in Delray Beach, Fla. She has trained at the Mouratoglou Academy in France since she was 10, and is expected to earn $1 million this year in sponsorships from New Balance, racket maker Head and the pasta company Barilla.

Gauff was the youngest player to qualify for a Wimbledon Grand Slam match. Before the tournament, Gauff’s dream was to play her tennis idols, Venus and Serena Williams. On July 1, Gauff defeated Williams, the five-time Wimbledon champion who was on her way to winning her 90th Wimbledon singles match.

“I definitely had to tell myself to stay calm during the match. I never played on a court that’s so big,” Gauff said in a BBC interview after the match. “I had to remind myself that the lines are the same size as any other court.”

How did Gauff and Williams react to the surprising match?

Gauff’s emotions came through after her win as she approached Williams for a handshake. “When we shook hands she told me congratulations and to keep going and good luck,” Gauff said in a BBC interview after the match. “I said ‘thank you for everything you’ve done’ – I wouldn’t be here if it wasn’t for her.”

Her parents Cori and Candi Gauff, could be seen cheering from the sidelines.

“My parents will be super happy, my dad was jumping up every time I won a point. I’m so happy they spent all their time on me and my brothers and making sure we’re successful.”

What’s next for Cori “Coco” Gauff?

At just 15-years-old, Gauff has a long road ahead of her.

“I’m still 15 and, like, my game isn’t nearly as good as I want it to be,” Gauff said during her press conference. She hopes to play in the US Open and other upcoming tournaments, but this will depend on a WTA ruling that limits the number of tournaments that 14 to 17-year-old players can compete in while they are still under 18.

The final Grand Slam tournament for 2019, the US Open, will be held this year from Aug. 26 through Sept. 8. 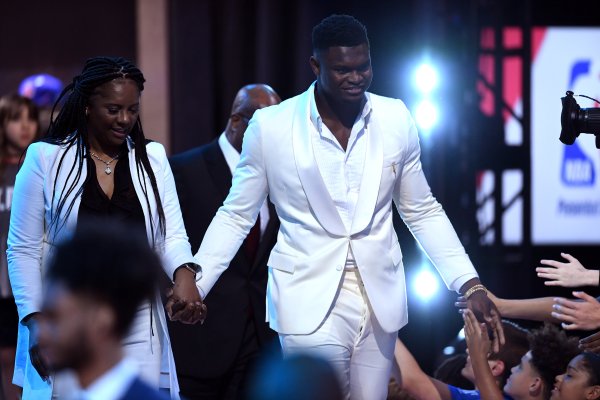 'She Put Her Dreams Aside for Me.’ No. 1 NBA Draft Pick Zion Williamson Gets Emotional Talking About His Mother
Next Up: Editor's Pick