The boos rained down on the Arthur Ashe Stadium court on late Saturday afternoon, the New York City fans behaving as if the Jets made another crappy draft pick, or the hapless Mets lost yet another miserable game. Not as if the new U.S. Open champion, who’s all of 20 years old, was about to receive her trophy for beating the best women’s player of all-time.

That champion, Naomi Osaka, should have been smiling from here to her native Japan. She had just achieved her craziest dream, beating her idol to win the first Grand Slam of her wildly promising career. Instead, during the post-match awards presentation, she pulled her visor down over her eyes, to cover up tears.

The well-heeled U.S. Open was devolving into something uglier than it had ever seen. Then Serena Williams hit one of the biggest winners of her career.

She put her arm around Osaka to comfort her, and implored the pro-Serena crowd, which was still ticked because chair umpire Carlos Ramos gave her a severe game penalty in the second set of her 6-2, 6-4 loss to Osaka, to stop with the Bronx cheer.

“She just won,” Williams said after the presentation. “I felt like, wow, this isn’t how I felt when I won my first Grand Slam. I definitely don’t want her to feel like that.”

Fans followed Serena’s directive and cut back on the jeers. The moment overwhelmed Osaka. She felt real sorrow for denying Williams what would have been one of the most glorious moments of her legendary career. Williams sits one Grand Slam title short of Margaret Court’s all-time record of 24 championships. She could have tied the mark a year removed from almost losing her life. After giving birth to her first child last September, Williams suffered a pulmonary embolism and needed five surgeries.

“I know that she really wanted to have the 24th Grand Slam, right?” Osaka said after the match. “Everyone knows this. It’s on the commercials, it’s everywhere. When I step onto the court, I feel like a different person. I’m not a Serena fan. I’m just a tennis player playing another tennis player. But when I hugged her at the net …” Osaka started tearing up, recalling meeting Williams at mid-court after her win. “When I hugged her at the net, I felt like a little kid again.”

The whole exchange gave a tender twist to what was an otherwise unfortunate affair. Early in the second set, chair umpire Carlos Ramos issued Williams a code violation because he spotted Williams’ coach, Patrick Mouratoglou, making a hand gesture toward her; on-court coaching is prohibited at Grand Slam matches. After the match,Mouratoglou admitted he was trying to coach Williams. But everyone does it, according to Mouratoglou. “We all know that all the coaches coach at every match, all year long,” says Mouratoglou. “So this is the rule. Then there is the psychology the chair umpire is supposed to have. Tell Serena, ‘I’ve seen your coach do a movement, stop, otherwise you’ll have a warning.’ I don’t understand why he didn’t do that.”

Mouratoglou also said Osaka’s coach, Sascha Bajin — who was Williams’ hitting partner for years — was also coaching during the match. “I don’t tell her what to do on the court,” says Bajin. “It’s more that I tell her ‘good job, stay calm, you got this.’ That’s more motivation.” So no signals? “Hell no,” Bajin says.

Williams insists she didn’t see Mouratoglou’s instructions. “We don’t have signals,” says Williams. “We have never discussed signals.” She made that point clear Ramos. “I don’t cheat to win,” Williams told him. “I’d rather lose.”

She went up a break in the second set, but Osaka quickly broke back to cut Williams’ lead to 3-2. Frustrated, Williams smashed her racquet, which required Ramos to assess her a second code violation — and dock her a point in the next game. Still miffed that she received the first violation for coaching, Williams started shouting and pointing at Ramos.

“You owe me an apology,” she said. “I have never cheated in my life, I have a daughter and I stand what’s right for her.”

After Osaka broke her serve again to go up 4-3, Williams continued to berate Ramos during the changeover. “Say you’re sorry,” Williams said. She called him a “liar” and a “thief” for taking a point away from her. Ramos assessed her a third code violation, which resulted in a game penalty. Osaka was now up 5-3, a few points away from winning the match.

A tearful Williams, upset that Ramos would take a game away from her for calling him a thief, pleaded her case to tournament referee Brian Earley and WTA supervisor Donna Kelso. “You know how many men do things that are much worse than that,” she told them. The fans turned against Ramos. Osaka jumped around to keep loose during the delay.

In the heat of competition, athletes often lose their cool. Williams should not have pushed Ramos’ buttons during the changeover, especially since she already had two violations, and one more would cost her a game. But officials also can’t be in the business of impacting the outcome of Grand Slam finals. At the end of close basketball games, for example, refs are loathe to call a technical foul that could alter the outcome of the game. Superstars especially have earned more leeway. Unless LeBron James unleashes a slew of in-your-face F-bombs or tackles the official, the ref’s swallowing his whistle.

Calling Ramos a thief wasn’t cool. But that insult doesn’t justify such a crucial call. Many current and former tennis players agreed.

Still, the entire controversy shouldn’t overshadow Osaka’s achievement. She outplayed Williams on Saturday, full stop. Osaka seemed unfazed, firing off aces when Williams had break points, playing nearly flawless tennis in the first set. Osaka had just five unforced errors in the set, while Williams had 13. Williams struggled with her serve: she put just 38% of her serves in play in the first set, while Osaka put 73% of her first serves in play. Williams finished the day with six double faults; Osaka had just one.

If Ramos hadn’t given Williams the game penalty, she still would have had to break Osaka’s serve again in the second set to keep the match alive. Williams won a single break point all afternoon. Osaka ended the match on a 114 miles per hour service winner; she serves big, hits big, and gets her body to tough shots in time. Just like her idol. And Osaka’s just getting started.

Meanwhile, Williams is already considering the lessons of her verbal altercation. She represents much more than her sport, and she knows it. She’s not regretting her actions. “You definitely can’t go back in time,” says Williams. “I can’t sit here and say I wouldn’t say he’s a thief, because I thought he took a game from me. I’ve seen other men call umpires several things. I’m here fighting for women’s equality and all kinds of stuff.”

She thinks the penalty was sexist. “He’s never taken a game from a man because they said ‘thief.’ For me it blows my mind.” She also brought up the code violation that Alize Cornet, of France, received for changing her shirt and briefly exposing her sports bra on the court earlier in the tournament. Men can change shirts in public during a match. “This is outrageous,” says Williams. (Tournament officials have clarified the rule: both men and women can change shirts while sitting in their chairs on court). 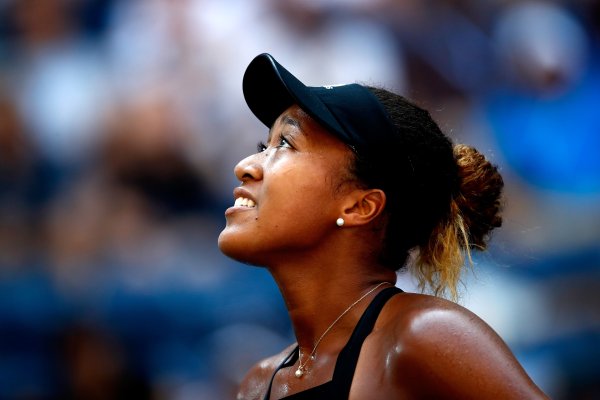 Naomi Osaka to Make History at U.S. Open Finals
Next Up: Editor's Pick