What These 3 Longstanding JFK Myths Reveal About America

Nearly six decades after President John F. Kennedy’s assassination on Nov. 22, 1963, myths and misunderstandings persist about the President. The tragic way in which the handsome political leader was gunned down so young, at the age of 46, is a big reason why there’s continued fascination with him and his administration.

“History in its most cursory form is a beauty contest, and as we look at John F. Kennedy, he’s a perfect President for the television age, because he shows up so well and he speaks so elegantly,” says Mark K. Updegrove, author of the new book Incomparable Grace: JFK in the Presidency.

Here, Updegrove highlights, in his own words, a few common misconceptions about JFK‘s presidency—and what they say about how America chooses to remember his place in American history.

Myth: JFK “won” the Cuban Missile Crisis by staring down the Soviets

I would say that that the Cuban Missile Crisis is JFK’s greatest moment in his presidency. It’s certainly the most dangerous moment, not only during the course of his administration, but in the history of mankind, as we stared down the Soviets and found ourselves on the brink of possible nuclear annihilation. And it’s Kennedy’s coolheadedness and his equanimity that saves us at that time from what might have been the biggest tragedy in the history of the world.

But what is mythologized is that the Cuban Missile Crisis is a zero-sum game—that we stared down the Soviets, the Soviets blinked and then retreated from Cuba. And while that is true, what we also need to understand is this is not just the act of a very rash, bellicose adversary in the Soviet Union, in Nikita Khrushchev, who brazenly shipped nuclear missiles to Cuba, just 90 miles off of American shores. There was a reason for him doing that, and that is that the Soviets were at an intrinsic disadvantage in terms of nuclear weaponry across the world. The reality was we had far more nuclear weapons than the Soviet Union did. And the Soviets knew that. They also knew that we had U.S. offensive missiles in Turkey, just shy of the Soviet border. So what seemed like recklessness on the part of Nikita Khrushchev was really more of a calculated risk.

Ultimately, what happens, although the world didn’t know it at the time, is that yes, the Soviet Union retreated from Cuba, taking their missiles with them. But we also, six months later, as part of a backdoor agreement with the Soviets, withdrew our missiles from Turkey. So it was really a quid pro quo to ensure that there weren’t nuclear weapons by the other side that were very close to the border of that country posing an existential threat.

Read more: A historian’s reflections on what John F. Kennedy Meant to Americans

Myth: JFK would have pulled out of Vietnam

There’s wide speculation that JFK would have had the prudence to pull U.S. troops out of Vietnam. That’s because, privately, JFK had spoken to certain folks and said that he would pull out after his reelection in 1964. He didn’t say that to any of his military advisers and of course, Lyndon Johnson kept the same staff more or less in place when he became president and they gave him very hawkish advice on Vietnam. And we know what happened with Johnson; he doubled down on Vietnam, escalated the war to the nation’s detriment—to the world’s detriment, to a large extent. But speculation that JFK would have definitively pulled out of Vietnam has become widely accepted. It even became the subject of Stephen King’s novel and the subsequent Hulu mini series 11/22/63.

But while JFK’s pattern as President suggests that he would have taken a more prudent path, because he did so in averting military conflict in Laos, Berlin, and Cuba, there is no evidence that that we can see definitively that suggests that he would have withdrawn from the war. There are a couple of television interviews that Kennedy does two months before his death, in September of 1963, and in both, he says that it would be a deep mistake to withdraw from Vietnam. He subscribes to the Domino Theory, which suggests that if you let Vietnam fall to the communists, there will be countries of greater geopolitical significance that could fall in succession. This is, of course, at a time when we were enmeshed in a Cold War with the Soviet Union, and we were battling for hearts and minds throughout the world.

I think we tend to conflate the views of John F. Kennedy in 1963 with those of his brother when he was running for President in 1968. Robert Kennedy emerges in 1968 as an anti-war candidate, though Bobby Kennedy was an extraordinarily hawkish advisor to his brother as attorney general. So his feeling about Vietnam changed. The Kennedys have almost become monolithic in a way.

Read more: The enduring power of John F. Kennedy’s Message to the World

Myth: JFK was a consistent champion of civil rights

But while Kennedy had very faithfully intervened in the release of Martin Luther King, from what may have been a very dangerous stay in a rural prison during the course of Kennedy’s presidential campaign in 1960—and he would go on to win the majority of the Black vote partly as a result of that—his commitment to civil rights was very slow in revealing itself in his presidency. Initially, he was very reactive. He refused to do anything on a proactive basis relating to civil rights. At the same time, the majority of Americans didn’t see the urgency in pushing civil rights and neither did John F. Kennedy. He was far more interested in foreign policy. Foreign policy is the route that he saw to being a great President. I think, frankly, he’s hoping the issue of civil rights goes away because it’s an embarrassment to the United States. At a time when we’re trying to say that we are morally superior—that democracy is a better way of life for its citizens than what we consider Soviet tyranny—we also have second-class citizens in our own country, living in a system in parts of the country that is, by and large, apartheid, and that doesn’t make us look particularly good.

But he finally steps up when George Wallace, the very prejudiced, bigoted governor of Alabama, stands in the doorway of an administration building at the University of Alabama [in June 1963] and refuses to allow the integration of the school despite a court order to do so. Kennedy realizes he’s got to go on television and preempt Wallace, and he does so and gives a largely extemporaneous speech, in which he elevates the civil rights movement to a moral issue. At the same time, Kennedy proposes a Civil Rights Act that would break the back of Jim Crow. But, when he’s assassinated, he has exercised very little political muscle in attempting to pass the bill, which has languished. And it takes Lyndon Johnson with his great legislative skill, exploiting the martyrdom of John F. Kennedy, to get through the Civil Rights Act of 1964. 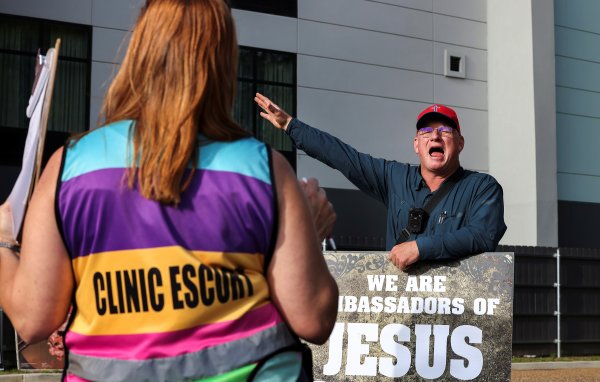 'Keep Listening to My Voice.' What It's Like to Be an Abortion Clinic Escort
Next Up: Editor's Pick