A Historian's Reflections on What John F. Kennedy Meant to Americans

President John F. Kennedy in the Oval Office on May 11, 1962, from a CBS report.
CBS Photo Archive / Getty Images
By David Kaiser

Election night in 1960 remains, without question, the most exciting night of my entire life. Every nerve of my 13-year-old body was attuned to the results.

By 8:00 pm, JFK was opening up an early lead, carrying Connecticut and New York, and soon he was leading in Pennsylvania as well. His lead in the popular vote grew and grew, and eventually reached almost two million votes. But then it began to shrink as the Midwestern and far western states came in, and it turned into a cliff-hanger whose winner was not clear until about 10:00 AM the next morning.

Kennedy had won. I did not yet know what that was going to mean for me.

Kennedy had talked a great deal during the campaign about refurbishing America’s image around the world, and he had definite ideas of how to do so. When it came to selecting ambassadors, Kennedy did not simply reward big contributors. He looked for a previous record of public service, experience abroad, and the sense that they would ably represent him and his generation, especially among the emerging nations of the world — even in those he appointed from outside the Foreign Service.

My father, Philip Kaiser, who knew French and had represented the U.S. in the International Labor Organization under Truman, was chosen to be Ambassador to Senegal. I had had no idea that we might be going abroad as a result of the election, and to say that I was unhappy would be a gross understatement. It turned out, though, that I had a sympathetic listener in the White House.

On April 2, 1961, I brought the Washington Post into our Bethesda house and found a remarkable story on page one. John Kenneth Galbraith, the economist whom Kennedy had chosen as Ambassador to India, had mentioned to the President that one of his children, Peter, was especially unhappy about leaving his friends and his school to move to New Delhi. (My first thought, I must say, was that my own father would never have shared my feelings with the President.) Kennedy had responded with a personal letter to young Peter, saying that he knew how he felt because his own younger siblings had gone through the same thing more than 20 years earlier when their father was appointed Ambassador to Great Britain. But he knew, he said, that Peter enjoyed animals, and India was sure to offer many fascinating ones. Peter was only one of many children going abroad for the New Frontier, the President continued, and he liked to think of them “as junior Peace Corps,” a reference to the new agency he was then establishing. “You and your brothers will be helping your parents do a good job for our country and you will be helping yourselves by making many friends,” he said. “I a little wish I were going too,” he concluded in a handwritten postscript.

That letter meant a lot — and not only to Peter Galbraith.

Like many expatriates, the Kaiser family became news junkies after arriving in Senegal in July 1961, although our news sources were few. While we could sometimes find the Voice of America on a short wave broadcast, we had no television of any kind, and depended on the American newspapers from Paris (which arrived a day late) and the international editions of TIME and Newsweek. The news was grim during 1961, including the Berlin crisis and the erection of the wall and the Soviet resumption of nuclear tests, culminating in the detonation of a 50-megaton bomb. (I vividly remember a Newsweek cover showing what that bomb would have done had it landed in Battery Park in Manhattan.)

But in 1962 President Kennedy began to hit his stride, and a series of dramatic stories found their way to us. In the spring he forced the steel companies to roll back an inflationary price increase. “It’s a revolution,” my father remarked, as he handed me the paper with the news. In September came the battle over the admission of James Meredith to the University of Mississippi. And then, the next month, one Tuesday morning, my father called me into my parents’ bedroom to brief me on the President’s announcement that Soviet missiles had been discovered in Cuba. With events unfolding so rapidly, our lack of news was never more painful than it was then. We received film of the president’s address and watched it during the week, but it wasn’t until many years later that I realized how close we had come to war. But my father the following Sunday got word through the Embassy that Khrushchev had agreed to pull the missiles out. It was another triumph for the President.

I returned to a very different United States on July 5, 1963, from the one I had left. Americans were orbiting the earth, the economy was booming and the Administration had introduced a massive civil rights bill and was negotiating a test-ban treaty with the Russians. History, in short, was moving rapidly, and generally in the right direction.

That fall, I bowed to my parents’ wishes and agreed to go to boarding school in Connecticut. They remained at home on leave for most of the fall, and it fell to me, on November 22 at about 2:00 PM EST, to place a collect call and give my mother the terrible news that I had just heard on the radio.

A few minutes later, sitting in the apartment of a teacher at the end of my dormitory corridor, I saw Walter Cronkite read the news of the President’s death. It was my first and perhaps even now my worst experience of real trauma, and I turned out to be the kind of person who simply shuts down. My parents, who had been masters of denial since trauma in their own childhoods, tried to reassure me. “Work, that’s the answer,” my father said. I came home for Thanksgiving five days later, and on Saturday night my parents had a huge party for all their many Washington friends. To my shock and amazement, I could not find one single person there who wanted to talk about Kennedy. All they could think about was Johnson, the great start he was making, and his ambitious plans for the future.

One who turned out to be different was William Attwood, another Ambassador in Africa and sometime guest in our house, who wrote a moving memorial of Kennedy for Look. He and his wife also turned it into a Christmas card and sent it to me at school. “The Kennedy administration was an exciting time to be alive, and a good time to be busy,” he wrote. “All I know, as I end this memoir, is that I shall always be proud to have been involved with the history of this time—the New Frontier period, as the historians will surely call it—and that my children—the two old enough to have worn Kennedy campaign buttons and the one soon to be born—will also remember and be proud of what their father was doing in the early 1960s. So I have that to thank Jack Kennedy for, too.”

I knew his children well, and it was at that point—for the first time—that I began to cry. He wrote that the previous Christmas, he had given his daughter a present of a note from the President in answer to a letter she had written him. The note was signed, “Your friend, John F. Kennedy.” As I read those words today I still feel a stab of pain and jealousy.

“She never met the President,” Attwood wrote, “but she always thought of him as her friend, and she was crying that terrible weekend because her friend was dead. This Christmas, I think a lot of Americans, like my daughter, feel they have lost a friend. They have.”

A lifetime as a professional historian allows one to find out the truth about the current events of one’s youth, and I have taken full advantage of that opportunity and then some. For example, while researching the origins of the Vietnam War for one of my books, American Tragedy, I found that while I was in Senegal Kennedy had repeatedly refused to intervene massively in Southeast Asia. Later, in The Road to Dallas, I explored his policy towards Cuba and his assassination.

As we observe the President’s 100th birthday — just days before my own 70th — I know that I shall not live into a new era anything like that of the Kennedy years. The mid-century consensus he embodied was politically extraordinary, with achievements that ran from the interstate highway system through civil rights, Medicare and the landing on the moon, but it was emotionally constricted, and my own Boom generation was certain to rebel. Had it not been for Vietnam, I shall always believe, that rebellion might have been less destructive and important parts of the postwar consensus might have survived. Instead, for 40 years I have watched my contemporaries tear down most of our political inheritance. Someday, new generations will rebuild it—but that day is a long way off. I am very glad to have been a small part, and a chronicler, of the Kennedy era.

Correction: The original version of this story misstated which day of the week the author learned of the Cuban Missile Crisis. It was a Tuesday, not a Monday. 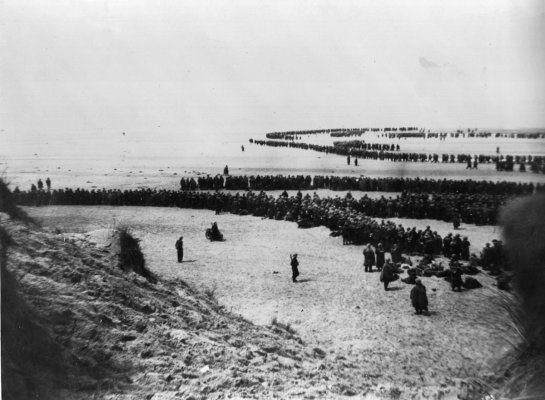 'Out of the Jaws of Death': Read TIME's Original Report on the Evacuation of Dunkirk
Next Up: Editor's Pick