By Brian Bennett and Abby Vesoulis

Joe Biden stood in front of an aging bridge in Woodstock, New Hampshire on Tuesday as some of the first winter snowflakes began to fall, and touted the $550 billion in new infrastructure spending he had just signed into law. But that bipartisan infrastructure law, which will fix bridges and roads and expand Internet access and train lines across the country, isn’t enough, he said. The American middle class has been “hollowed out,” according to Biden, and the time has come to “rebuild the backbone of this nation.”

To do that, Biden wants Congress to pass a second raft of spending proposals designed to reduce the costs of childcare, elder care, housing and prescription drugs, as well as take greater strides toward reducing the U.S. contribution to climate change. Those are central parts of Biden’s agenda, and most Democratic strategists believe passing them will be important for Democrats on the ballot in next year’s midterm elections. Top aides to Biden also think getting that second fleet of actions done is crucial to reverse Americans’ sagging view of the President’s own performance.

But it is precisely those low approval ratings—hovering in the low 40s by mid-November—that are hurting Biden’s chances of getting the so-called Build Back Better plan through Congress. It’s one of the physical laws of Washington that poll numbers bring their own gravity. And right now, that means Biden is caught in a vicious vortex: his poll numbers make it harder to get his agenda passed, but his advisors believe that passing his agenda is the best way to improve the polling.

The House may vote on the Build Back Better bill as soon as this week. But then it will head to the Senate, where Democratic senators Joe Manchin of West Virginia and Kyrsten Sinema of Arizona have stymied progress on the plan for months over concerns about raising tax rates, paid family leave, climate provisions and the overall cost. Biden has so far taken a soft approach with Manchin and Sinema, preferring to listen to their positions rather than strong-arm them into supporting his agenda. But once the House passes the bill, it will be time for Biden to close the deal, and his sinking approval ratings coupled with rising inflation may have further weakened his negotiating position with the stubborn Senate holdouts.

Multiple Democratic Senators told TIME the current circumstances do not preclude the caucus from passing the Build Back Better legislation by the end of the year, even after Biden signed the bipartisan infrastructure bill on Monday, eliminating it as a bargaining chip to keep Manchin and Sinema on board. The Congressional Budget Office (CBO) is expected to report on the costs and economic benefits of the social programs proposal later this week. “There’s so much more in here that will benefit both their states,” Sen. Tammy Duckworth of Illinois says, referring to Manchin and Sinema. “We’re going to have to wait until the CBO score comes out on Friday. But that doesn’t lessen our commitment to passing this. And if anything, it became very clear that we need to pass this before the end of the year.”

The White House is trying to get ahead of the CBO’s cost projection report that is expected to cast doubt on Democrats’ assurances that the spending bill would be fully paid for, partially through ramping up Internal Revenue Service (IRS) enforcement against wealthy tax scofflaws. The Administration has projected beefing up the IRS’s funding by $80 billion could result in $400 billion worth of revenue over a decade. But CBO Director Phillip Swagel said Monday, according to the New York Times, that the revenue could be much smaller: $120 billion in ten years.

Deputy White House Press Secretary Andrew Bates attempted to sow distrust in the nonpartisan governmental agency while traveling with Biden on Tuesday. “There has been wide agreement on the part of everyone involved—moderates, liberals, et cetera—that CBO does not have experience analyzing revenue amounts gained from cracking down on wealthy tax cheats who are taking advantage of every honest taxpayer,” Bates told reporters on Air Force One.

Manchin and Sinema had already voiced concerns about the size and scope of the Build Back Better bill before CBO cost projections began to trickle out. As inflation soars to a three-decade record of 6.2%, the notion of voting for something that is not fully paid for may make them even less likely to support the package. Several prominent economists, including former Treasury Secretary Larry Summers, have concluded that those investments wouldn’t increase inflation because the package is designed to increase productivity. Other members of the caucus will support the bill regardless. Vermont Independent Bernie Sanders, Chairman of the Senate Budget Committee, punted the concern about the IRS’ ability to raise enough revenue down the road. “Well, let’s not speculate,” he told TIME. “Okay?”

But some Democrats point out that Biden would not be the only President to deficit spend, if it came down to it. Donald Trump’s Tax Cut and Jobs Act—which slashed individual rates and lowered the top corporate tax rate—was estimated to add $1.4 trillion to the deficit over a decade when it was passed in 2017. “Republicans want to blame Biden for everything,” Sen. Sherrod Brown, an Ohio Democrat, says. “Republicans are the ones that drove the deficit into the hole with this trillion-and-a-half dollar Trump tax giveaway to rich people. We’re fixing some of that. Not enough of that, but some of that.”

Passing the bipartisan infrastructure bill and nearly $2 trillion in stimulus funding earlier this year means that Congress has now approved two out of three of Biden’s major spending proposals. Those actions have been broadly popular with voters, but that popularity hasn’t rubbed off on Biden. That’s left a gap between the low public ratings for Biden and the popularity of the actions he and the Democrats have ushered through so far.

Biden’s popularity began to sink in the summer as infections from the COVID-19 Delta variant spiked across the country and Biden presided over a chaotic withdrawal of U.S. troops from Afghanistan. The past few months have been marred by Democratic squabbles over the scale of the social spending bill and whether increasing taxes on corporations should be part of the plan to pay for it. White House Press Secretary Jen Psaki acknowledged on Monday that the haggling among Democrats has taken a toll on public perception. “I’ve been doing press and communications for some time—I will tell you that you don’t design a communication strategy around infighting within the Democratic Party in Washington,” Psaki told reporters. “That has been a necessity in order to get this legislation done.”

In the meantime, the U.S. economy has jumpstarted back to life, reducing unemployment but creating a surge in demand for goods has led to supply chain bottlenecks and an increase in prices. Voters lay those problems at Biden’s feet: 49% of Americans disapprove of Biden’s handling of the pandemic, according to recent polling by Washington Post-ABC News. That same poll showed that about half of Americans blame Biden for record inflation.

In the Senate halls on Tuesday, Sen. John Hickenlooper, a moderate Colorado Democrat, argued the President’s poor polling isn’t his fault, but the result of long-standing supply chain issues that preceded Biden’s presidency. They are “a reflection of the transitory inflation caused by the bottlenecks in the supply chain and then OPEC oil producers holding back supply, trying to cause mischief,” Hickenlooper said, referring to the Organization of the Petroleum Exporting Countries, a consortium of 13 countries that controls more than 35% of the world’s oil exports.

Those close to Biden agree these disruptions are temporary, and they believe the way out is through passing the Build Back Better package. “We’ve got to get this bill done,” says a Democratic strategist with ties to the White House. “We have a good way out of this. Some of it is going to happen organically on its own, like COVID, the supply chain, and some of it we have to take control of.”

Voters are waiting to see just how much Biden can control. 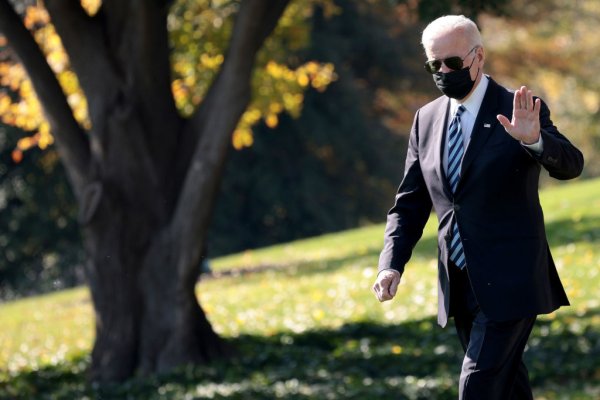 Joe Biden Faces His Next Challenge on the Infrastructure Bill: Making Voters Care
Next Up: Editor's Pick