Senators have spent hours on the custard-colored couches of Joe Biden’s Oval Office over the past several days. Dozens of chocolate chip cookies have been passed out. Irish poetry has been quoted. In one White House meeting on Sept. 22, a small group of progressive lawmakers perched on cushions where small note cards saved their spots and outlined why they should fully fund Biden’s priorities on community college, expanding Medicare, and providing workers with more child care and family leave in a $3.5 trillion budget bill. Then Biden slipped up, referring to himself as if he were still in the Senate. “Wait, wait,” he said, flashing a lopsided grin, “I’ve got this job now.”

During the more than three decades that Biden was the long-winded Senator from Delaware with incandescent teeth, he bristled at being brought into the Oval Office and being told what to do by Presidents, aides say. Biden has kept those memories top of mind as he faces down two holdouts from his own party—Arizona Senator Kyrsten Sinema and West Virginia’s Joe Manchin—on landing his signature spending proposal. Biden has held back on dictating orders, White House aides say. Instead he’s listened, and detailed his case for why the big spending bill is good for the country.

But with trillions of dollars at stake and time running out to reach a deal, that approach has irked some progressives in the House, who want him to more forcefully use his clout to get everyone in line. “I continue to call on the President to exert the full weight of his presidency both to abolish this filibuster and to lean on Manchin and Sinema to do right by the American people,” Rep. Ayanna Pressley, a Democrat from Massachusetts, said on WBUR’s radio show On Point Wednesday. (Pressley has repeatedly called for an end to the Senate relying on a 60 vote threshold, which overcomes a filibuster, to pass legislation.)

Biden cancelled a scheduled Air Force One flight to Chicago on Wednesday to stay in Washington to help push his proposals through the House and the Senate. House Speaker Nancy Pelosi is preparing to move forward with a planned House vote Thursday on a $550 billion bipartisan infrastructure bill, if progressives in the House can be assured the larger funding package that invests in the country’s social safety net will pass the Senate. Both Manchin and Sinema visited the White House for additional meetings with Biden on Sept. 28, with Manchin pushing to shave down the cost of the larger bill and Sinema objecting to the size of the tax increase on corporations.

Despite the looming deadlines, Biden has relied heavily on Pelosi and Senate Majority Leader Chuck Schumer to wrangle the votes rather than try to strong-arm demands from his position at the White House. “He still sees himself as a legislator, therefore he’s in our shoes very often, and I think that’s helpful,” says Rep. Mark Pocan, a progressive Democrat from Wisconsin, who was in the Oval Office last week when Biden had to remind himself he was President and not a Senator. Pocan says he told Biden that the major investments in families and health care shouldn’t be cut in the reconciliation bill. “We’ve got to keep these priorities that people are going to really feel to make sure that, you know, we’re doing our jobs,” Pocan recalls telling Biden. He says Biden agreed.

Aides in the White House grasp just how much is at stake for Biden. He’s faced a cascade of withering setbacks in recent months, with the chaotic Afghanistan withdrawal, an influx of Haitian migrants on the southern border, confusing public comments on COVID-19 vaccine booster shots, and his Administration’s frustration at the number of American adults who still aren’t vaccinated. His poll numbers have sagged. With the potential that Democrats could lose control of one or both chambers of Congress next year, the window is closing for Biden to pass the transformational initiatives he campaigned on. White House Press Secretary Jen Psaki said on Sept. 28 that this is “clearly a pivotal moment” and a “sensitive time” in the negotiations with Senators. When Biden was in the Senate for 36 years, “He didn’t want any President to tell him what to do,” Psaki said. “He’s not going to tell anyone what to do.”

But as the deal to pass both bills threatens to fall apart, Biden’s strategy to not press too hard has left some wishing for stronger leadership from the Oval Office. “It’s a little bit chaotic,“ says a person familiar with the discussions among Democrats in the Senate. Biden could be doing more to quarterback the process, the person says: “Nobody has a 100 percent full understanding of this moment.”

Pelosi told fellow Democrats in a caucus meeting late on Sept. 28 that her leadership team is still waiting to hear the final top-line number for the so-called “soft” infrastructure spending bill. Biden has proposed $3.5 trillion in spending, to be paid for by changes to tax enforcement and increased taxes on corporations and the wealthy. But Sinema and Manchin have said they aren’t comfortable with that number, and Biden is trying to get them to an agreement on a final figure—even if his methods aren’t as forceful as some progressives would like. “We’re still waiting for the number,” Pelosi told Democrats in the House during the evening caucus meeting, according to a person familiar with the discussion. “The President is working on that piece.”

-With additional reporting by Alana Abramson and Molly Ball/Washington 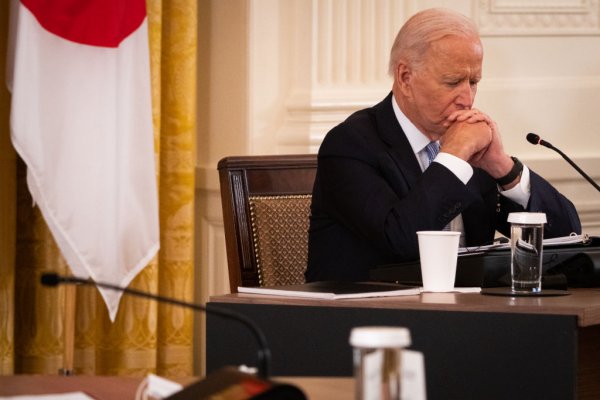 Joe Biden's Effort to Pass His Domestic Agenda
Next Up: Editor's Pick