What Does Kyrsten Sinema Want?

When Arizona Republican Steve May was first introduced to then-state legislator Kyrsten Sinema in the early 2000s, she wouldn’t even say hello.

“At the time, all she knew about me was that I was an evil Republican,” May recalls. “She looked me up and down, turned on her little poodle skirt, and walked away. She wouldn’t even shake my hand.”

Back then, Sinema was widely considered the manic pixie dream girl of Arizona progressive politics, a tutu-wearing Green Party activist who supported Ralph Nader’s presidential bid. Fast forward 20 years, and Sinema has emerged as one of the two most conservative Democrats in the U.S. Senate. She’s a sometimes-ally to Republicans like Ted Cruz, as comfortable among the GOP as members of her own party. And now, she’s a critical roadblock to President Joe Biden’s agenda.

Sinema’s not the only Democrat preventing a landmark $3.5 trillion spending bill from moving ahead. But Senator Joe Manchin of West Virginia, the other holdout, has been more transparent about what he would or wouldn’t support, and has to answer to constituents from a deep-red state. Sinema, on the other hand, has emerged as a singularly elusive figure who has vexed Democrats by blocking the centerpiece of the party’s legislative agenda without publicly signaling what she wants or what it will take to win her vote.

“She’s either operating and playing three-dimensional chess that no one else is understanding, or she is kind of freewheeling,” says a person familiar with the policy discussions taking place among Senate Democrats. “It’s hard to define what it is exactly she’s trying to get out of this.”

The mystery of Kyrsten Sinema’s motives may now be the key to unlocking trillions of dollars in infrastructure and social spending. Sinema isn’t saying: she rarely talks to reporters (her office did not respond to a request for comment on this story), and while aides say she’s outlined specific concerns about the bill to the White House, many congressional Democrats remain in the dark. With the party hunkered down to negotiate in the Capitol Friday, and Biden’s agenda hanging in the balance, Sinema headed home to Arizona to attend a doctor’s appointment and a fundraiser.

Yet several of Sinema’s allies and acquaintances in Arizona say they have an idea of what drives the sphinx of the Senate: she wants to be considered a maverick, like the late Arizona Republican John McCain.

“I think she definitely would like for her legacy to be ‘the maverick’ like him,” says Grant Woods, a former Republican attorney general of Arizona, former chief of staff to McCain and close ally of Sinema’s during her 2018 Senate campaign. “He was instinctively drawn to doing the opposite of what he was told and what people expected. She’s definitely attracted to that image.”

Sinema has said as much. In her first speech on the Senate floor, she called McCain her “personal hero.” When she opposed the Democrats’ $15 minimum wage hike, she did with a thumbs-down flick of her wrist that echoed McCain’s thumbs-down vote on the GOP’s attempt to gut the Affordable Care Act. She called the late Senator “my friend” in a Facebook post marking the anniversary of his death, even though Woods says the two weren’t close.

“She wants herself viewed as John McCain’s heir. McCain had a reputation about standing up to his party and all that,” says a senior national Democrat who has worked closely with Sinema. “But McCain, you knew what his values were. You never had to question what his vision was for the country. And you really can’t answer that question for Kyrsten.”

Unlike Manchin, who has said he does not want to spend more than $1.5 trillion on the bill, Sinema has not publicly defined her red lines. She doesn’t seem to care that she’s alienated her party’s base and infuriated Arizona Democrats. Her opposition doesn’t seem to be tied to her re-election prospects; she doesn’t have to run for her seat again until 2024. Even Democrats who know her say they aren’t sure what she’s after besides a patina of bipartisanship.

A bisexual, wig-wearing triathlete who was raised in poverty and became a social worker, Sinema is as famous on Capitol Hill for her funky clothes and aloof style as for any particular policy vision. Yet she has undergone a striking political metamorphosis since the days when she wouldn’t shake Steve May’s hand. Sinema was a fixture on the progressive activism circuit in the early 2000s, dressing up in black veils to protest the war in Iraq. Now she’s raising money from business groups as she withholds her support for Biden’s Build Back Better plan, which would raise corporate and top individual tax rates to offset massive spending on childcare, education and climate issues, among other top progressive priorities.

People who know her say she is likely unfazed—if not a little excited—by the spotlight she’s under. “She probably feels less pressure than we think she’s feeling right now,” says May, who after their chilly first encounter patched things up with Sinema and wound up working closely with her to defeat Arizona’s proposed ban on same-sex marriages in 2006, partly by keeping progressive activists at arms length and sticking to a moderate, pro-companionship message. “I grew up with all the McCain squabbles, and I think she probably watched some of those,” says May, who grew close with Sinema during their time in the legislature. “I think she feels like she is a maverick in her own right.”

The late Senator’s legacy looms large over Arizonans of all political stripes. “She enjoys having the reputation of someone who works across the aisle. She watched John McCain do that throughout his career with great success,” says Woods. But, he adds, “she’s not John McCain. John McCain was unique, with his background, his resume, his style, his personality.”

McCain was a decorated war hero, a survivor of torture, and a presidential nominee with an independent voting record anchored in his belief of putting country over party. Even some people who know Sinema well say they have no idea what she believes.

“Kyrsten’s all about Kyrsten, and she doesn’t want anybody to make assumptions about her,” says the senior national Democrat. “I know John McCain. And Kyrsten’s no John McCain.”

With reporting by Brian Bennett/Washington 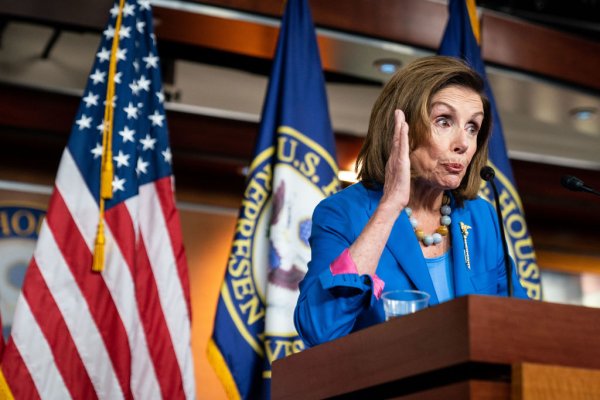 Progressives Throw Biden's Agenda Into Doubt
Next Up: Editor's Pick