At a Low Point in His Presidency, Biden Plots a Path Back

Joe Biden got home at 1:35 a.m. on Wednesday morning, stepping off the Marine One helicopter onto the White House lawn about an hour after Democrat Terry McAuliffe lost the Virginia governor’s race in what was widely billed as an early referendum on the President’s performance. Just hours before, Biden had told reporters: “I think we’re going to win.” It didn’t turn out that way.

Biden returns from a climate conference in Scotland to a new political reality and a low point in his young presidency. His approval ratings have slid to the low 40s. His signature legislative proposals are mired in intra-party squabbles. Recent Gallup polling shows Americans most concerned about the pandemic, poor government leadership and the economy—all issues that have proven stubbornly difficult to fix.

The loss in Virginia and the question of how to respond consumed the President’s conversations with advisers Wednesday afternoon. Several aides say they want Biden to speak more about advances the country’s made in recent weeks on the pandemic, to highlight that hospitalizations from COVID-19 are down and vaccination rates are going up. And so Biden delivered remarks in the Eisenhower Executive Office Building to hail the authorization of the Pfizer vaccine for children ages 5 to 11. “This is a day of relief and celebration,” Biden said.

Read More: What Democrats Need to Learn From Glenn Youngkin’s Win in Virginia.

But there was no escaping the defeat in Virginia. At the end of his remarks, reporters questioned Biden about the fallout from McAuliffe’s loss. Asked what Democrats should do differently to avoid widespread losses in the midterm elections next fall, Biden said, “I think we have to just produce results for them to change their standard of living and give them a little more breathing room.”

Biden and his close advisers think the best thing for the President and his party is to get his multi-trillion dollar spending bills signed into law. The loss in Virginia is “gonna send a signal that we gotta produce,” Democratic Senator Tim Kaine of Virginia told reporters on Wednesday. “The American public gave us a majority in both houses for a reason and we got to get results for people.”

Democratic strategists are already planning ways to highlight what the proposals can deliver for voters a year from now. “I’m confident that as Democrats we’re gonna have one of the strongest messages in a generation because of what we’re going to pass and what we are going to be able to say that we have done for working families and seniors and small businesses,” says John Anzalone, a Democratic pollster and strategist who advised Biden’s presidential campaign.

But that requires breaking the stalemate in Congress and getting the two bills to Biden’s desk. The White House has been signaling to Democrats in Congress that the window to deliver is closing and the party needs to reach an agreement soon. But Biden has been reluctant so far to twist arms too hard. And while party leaders keep teasing a vote on the horizon, disputes linger.

House Speaker Nancy Pelosi on Wednesday announced a provision offering four weeks of paid family and medical leave would go back into the House version of the social spending bill, after a compromise made public last week had taken it out. Senator Joe Manchin of West Virginia, one of two Democratic holdouts in the Senate, blasted the current version of Biden’s proposed deal Monday, saying he hadn’t signed off on the framework that was made public, which he declared was full of “budget gimmicks” and “shell games.”

Read More: Democrats Struggle to Keep the Faith in Biden.

Manchin’s takeaway from the loss in Virginia wasn’t to hurry up and pass the bills. It was to slow down. “I just think that the message was really sent, if we’re going to do something, let’s take time and do it right. Let’s make sure that people know what’s in it,” Manchin told reporters at the Capitol on Wednesday.

“It’s not difficult. Voters want government to act and act in a way that helps them,” says Jonathan Kott, a former senior advisor to Manchin. “Just get s— done.” It’s been easier said than done. 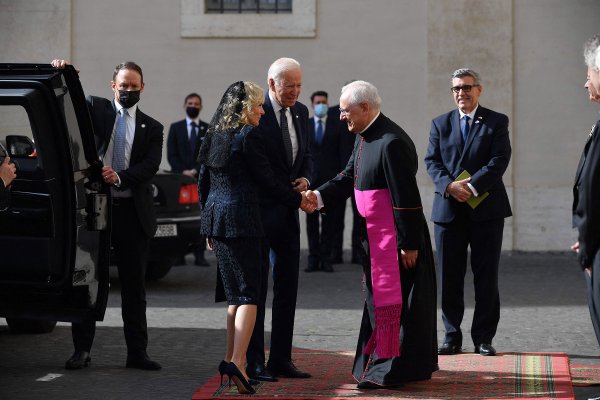 Joe Biden Meets With Pope Amid Tensions With Catholics
Next Up: Editor's Pick