How Democrats Bungled Their Big Win on Infrastructure

President Joe Biden walks towards the Oval Office at the White House after arriving on Marine One in Washington, on Nov. 8, 2021.
Oliver Contreras—Sipa/Bloomberg/Getty Images
By Philip Elliott

President Joe Biden pulled the sunglasses from his face when he heard the question shouted to him yesterday from NBC News’ Kelly O’Donnell on the South Lawn of the White House. Was the President—whose agenda had seemed weighed down, if not completely lifeless, just a few days ago—expecting his weekend win on a bipartisan infrastructure bill to give some momentum to a companion piece of social spending?

The President clearly liked the question. “I am always optimistic,” Biden said in a cheerful tone. “It’s going to be a tough fight. It ain’t over yet, as the expression goes, but I feel good.”

Then O’Donnell asked if Biden had learned any lessons from getting the bipartisan infrastructure bill passed. Biden responded glibly with a flash of a smile: “None I didn’t already know.”

And that, right there, is why Democrats are right to worry about the midterm elections, now less than a year away.

Democrats have been in power since January, albeit with the narrowest majorities and plenty of acrimony in their ranks. Biden is perhaps the one person in Washington who can crack heads and force unity, but he has preferred so far to take a softer approach with his former colleagues at the Capitol. The result has been plenty of pleasant conversations with various coalitions and plenty of lagging— so much that it has threatened the President’s legacy-defining infrastructure agenda.

If Democrats stand a chance in 2022, Uncle Joe may need to become Sheriff Joe. Biden’s been ringside as other Presidents have made such pivots. He watched Jimmy Carter realize he couldn’t be his own chief of staff, watched Bill Clinton salvage his dismal start in short but dramatic order and had the understudy role as Barack Obama decided his search for unity on healthcare was never going to produce results. Reinvention is the game in Washington and it’s up to Biden to decide if he wants to play it. If he doesn’t, he might well start settling into his ocean-adjacent home on the Delaware coast.

The Senate in August passed a popular package that would authorize $550 billion in new spending on things traditionally considered to be infrastructure, such as bridges and tunnels, airports and pipes. The spending proposal was so unobjectionable that 19 Republican Senators in a highly partisan chamber got behind it, including Senate Minority Leader Mitch McConnell. But the bill sat in the House for months, hostage to Democrats’ negotiations over the Build Back Better Act, the second part of Biden’s infrastructure agenda that includes spending on social safety net programs like childcare, paid family leave and changes to drug pricing.

Republicans won’t vote for Build Back Better, forcing Democrats to use a bit of legislative gymnastics in the Senate to bypass the typical threshold of 60 votes to shut down a filibuster. Using what the Hill knows as reconciliation, they can skate by with all 50 Democrats united and Vice President Kamala Harris breaking the tie. But two bracingly independent Democrats, namely Senators Joe Manchin and Kyrsten Sinema, had very different ideas about the size and scope of the bill.

Democrats on the House side of Capitol Hill didn’t want to pick up the bipartisan bill until they knew they could get Act II, and House Speaker Nancy Pelosi and her team resolved that it was both or none. So bickering in the Senate over the partisan-but-popular Build Back Better Act has held up the centerpiece of Biden’s domestic agenda, slowly chipping away at voters’ faith that his Administration is able to get anything done.

It took a calamitous election night on Nov. 2 for Democrats in D.C. to take note of just how unhappy the nation is with the stasis. Voters in Virginia elected Glenn Youngkin as the commonwealth’s next Governor and in reliably blue New Jersey, Gov. Phil Murphy very nearly lost his re-election bid. It was a rout in state legislatures, too, as voters said they’d had enough of the Democrats, who have unified control and don’t have a lot to show for it.

Terry McAuliffe, the Democratic nominee in Virginia’s race, had been warning Democrats the clock was ticking, but only when he lost his bid did they realize the former DNC Chairman might know a thing about politics. In the House, inaction was no longer a tenable answer, but the distrust between the Dems’ factions runs deep. Centrists pushed hard for a quick vote on the bipartisan bill already passed in the Senate to deliver an easy win. But progressives still wanted to wait and pair it with the social spending bill. Centrists then said they couldn’t vote on that plan until the Congressional Budget Office completed its review of the 2,000-page bill, a task that could take weeks.

Eventually, with poll numbers for the Democratic Party in freefall, the two factions reached an agreement: the centrists would back the coming $1.75 trillion social spending package if—and it’s a big if—the Congressional Budget Office analysis came back positively. Ultimately, the bipartisan bill passed, but six progressives still voted against it because they weren’t ready to release the hostage.

And so what should have been a huge victory for Biden reads instead like a failure, unfurling all of the problems inside the Democratic Party. It passed just before midnight on a Friday, not exactly prime scheduling to dominate the news cycle or for members to take victory laps on cable. It came after delays that can only be seen as self-created. And it tested—if not revealed—the limits of Biden’s campaign pitch of being a skilled dealmaker.

Beyond fixing broken bridges and tunnels, the infrastructure implosion should be a wake-up call for Democrats. They were already bracing for a tough 2022. Republicans largely control how House districts are being redrawn across the country this year and the temptation to gerrymander seats. The party in the White House typically faces deep losses in its first at-bat with Americans picking all 435 House seats. And the Senate map already is looking dicey with zero margin for error and only a few pick-up opportunities. Looking like feuding feudal lords and ladies isn’t going to help their chances.

Then there’s the Biden Factor. Since World War II, only Donald Trump and Gerald Ford had a worse standing with voters at this point in their presidencies. Biden’s polls are at the lowest point of his tenure and his political juice isn’t much better. Voters in Virginia told the exit pollsters that they cast their ballots against McAuliffe to send a signal to Biden that they’ve had it, especially the suburban women who made Democratic gains in 2018 and 2020 possible. In fact, 51% of all Virginians told exit pollsters that the Democratic Party was too liberal, including 13% of voters who backed McAuliffe.

That finding helps to explain an important study of American politics from the Pew Research Center, released today. Among Democrats, only 12% fall into a bucket defined by Pew as the Progressive Left, and it’s the only group that is majority white. Contrast that with 28% that fall under the label of Democratic Mainstays, older party members who are the oldest and most loyal group, and the 23% who should be considered Establishment Liberals, who like liberal ideas but not necessarily wholesale change. The other 16%? The so-called Outsider Left, the very liberal young voters who don’t much like the political system, including the Democratic Party.

In other words, chasing a progressive agenda is appealing to a very loud part of the Democratic Party, but it’s not a plurality. The bigger slices of the Democratic Party just want to put some points on the board and drop the calls for wholesale systemic change. It’s how Biden cleared the field in 2020 and how he did what is almost impossible to do in American politics: the defeat of an incumbent President.

If Biden gets all this, he’s not letting on. He has repeatedly said that he didn’t run for office to have good poll numbers. But if those numbers don’t reverse course, there are going to be a whole lot fewer Democrats for him to invite for nice long conversations over ice cream on the patio outside of the Oval Office—or wherever Biden is hanging his hat come 2025. 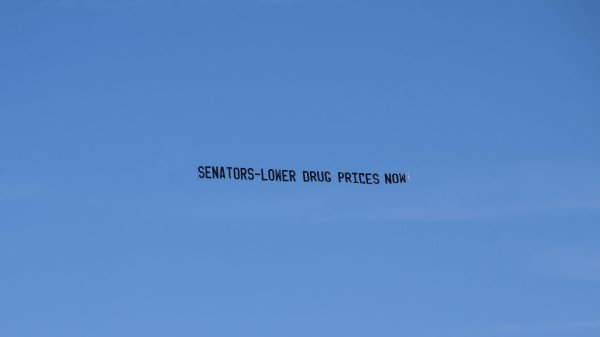 Democrats Should Talk About Costs, Not Fairness, to Sell Drug Pricing to Voters
Next Up: Editor's Pick