Illustration by Pete Reynolds for TIME
By Abby Vesoulis

In the early days of the coronavirus pandemic last spring—as healthcare providers worked tirelessly to treat piling COVID-19 cases, nursing home employees moved in with their residents, and liquor distilleries shifted production from spirits to hand sanitizer—another group of employees found themselves buried in piles of unexpected mission-critical work: the nameless bureaucrats of the Internal Revenue Service (IRS).

IRS employees may be best known for siphoning hard-earned dollars from Americans’ paychecks, but during the 2019 tax return season they took on a new, opposite role: dropping money directly into people’s bank accounts. More than 160 million Americans received $270 billion worth of first-round Economic Impact Payments—or stimulus checks—last year. As they learned how to work remotely, like so many other offices throughout the country, IRS agents were also juggling the massive new pandemic responsibilities with the agency’s annual duties, such as answering millions of phone calls from confused taxpayers, collecting trillions of dollars in gross taxes, processing hundreds of millions of federal tax returns and supplemental documents, and issuing billions of dollars in tax refunds.

The next tax year, IRS workers were again shouldered with extra work: distributing second- and third-round stimulus checks, worth more than $400 billion combined, and following a congressional mandate to waive taxes owed on pandemic unemployment benefits after millions of beneficiaries had already filed their taxes. “I thought last year the filing season was a tour de force,” says John Koskinen, IRS Commissioner from 2013 to 2017. “But this year made last year look like kids’ play.”

The agency is on a dire path. As the government relied on the IRS to deliver new benefits during the pandemic, it distracted from the 158-year-old agency’s core mission to collect taxes. After years of dwindling resources from Congress, the IRS was already cash-strapped and struggling each fiscal year to bring in the revenue taxpayers legally owe the federal government. Now, with the added responsibilities of delivering stimulus checks, wrangling changes to the Child Tax Credit, and programming changes that retroactively waive taxes on pandemic unemployment aid, the understaffed, underfunded agency is falling dangerously behind. “The IRS absolutely needs more resources across all lanes,” current IRS commissioner Charles Rettig told Congress in April. “We do get outgunned. There’s no other way to say it.”

Over the course of the last decade, the IRS has lost 17,000 enforcement workers and seen its budget decrease by 20% after adjusting for inflation. In his April testimony to the Senate Finance Committee, Rettig estimated the IRS is collecting upwards of $1 trillion less than what the federal government is owed in taxes every year, which he blames in part to lack of personnel. Out of 100 million calls taxpayers made to the IRS in Fiscal Year 2020, IRS employees answered only about a quarter of them. Of the fewer than 100,000 employees who work for the IRS, 52,000 are expected to retire or leave the agency over the next six years, according to Rettig.

When it comes to appropriations, Republican lawmakers often argue the IRS’ inability to carry out its key duties is a reason to further starve it of resources, creating a negative feedback loop in which the agency will be at risk of performing even worse. This can harm everyone: the less money that the IRS collects from the people who owe it, the less money the government has to invest in programs that support public schools, roads, Social Security, and Medicare—and the higher the national debt balloons. “The funding and responsibilities of the IRS have been going in opposite directions for a very long time,” says Charles Rossotti, who served as IRS Commissioner between 1997 and 2002.

It’s a trend that has been building over decades, and the agency may be reaching its breaking point.

‘We have to create an entire new structure’

Starting next month, President Joe Biden has made the Child Tax Credit more generous for families with young kids. That’s good news for moms and dads around the country, but it’s another burden for the struggling IRS.

Previously, parents received a tax credit of up to $2,000 per child under age 17 at tax refund time. Starting in July, the IRS will provide most parents between $3,000 and $3,600 for each child under the age of 18, divided into installments that come as often as monthly. The credit will be fully refundable—meaning the poorest Americans who were previously excluded because they did not make enough money to owe any taxes will be eligible.

This tax credit, which is funded for one year and will expire if Congress doesn’t extend it, could lift millions of children above the poverty line, according to an analysis by the Center on Budget and Policy Priorities. But for the thinly staffed agency responsible for doling it out, the new cash payment requires more time and resources spent figuring out how to deliver benefits, which isn’t its typical role. “We have to create an entire new structure for the Internal Revenue Service,” Rettig said. “We are not historically a benefits delivery federal agency, but we’re setting that up.” He estimated the cost for facilitating the program to be $391 million, and that it would take 300 to 500 IRS staffers.

It’s not just the expanded Child Tax Credit. Enforcing the tax code has gotten more complicated over the last several decades due to an increase in sprawling business partnerships, which are difficult to audit; new tax deductions, like the qualified business income deduction under the Tax Cuts and Jobs Act; and the ever-globalizing economy. “When I was in law school and took a tax course, the tax code was one moderate-sized volume,” says former IRS Commissioner Koskinen. “Now, with all the regulations, I don’t know how many feet it measures. But there isn’t anybody who knows it all.”

Without being granted extra money, it’s a zero sum game: the more IRS time and resources go towards implementing new benefits programs, the less time and resources are devoted to doing its fundamental job of collecting revenue. “Any time you ask the IRS to go about sending money out rather than assessing and collecting taxes—no matter how laudable, like PPP or stimulus funds—it requires the IRS to take their best IT and management people off the core mission as they scramble to accomplish the new goal,” says former deputy IRS commissioner Mark Matthews.

As IRS employees were rushing to create a system that would ensure millions of expanded child tax credit installments could be sent out out in July, they were met with another headache.

The news outlet ProPublica obtained access to some of the wealthiest Americans’ tax information and began to publish articles with the information in early June. The first report didn’t indicate the billionaires were illegally evading taxes. But it showed that the nation’s 25 wealthy individuals collectively saw their worth rise more than $400 billion between 2014-2018, while they only paid $13.6 billion in federal income taxes those five years.

Both Republicans and Democrats were incensed, but lawmakers on the left largely saw the ProPublica reporting as more reason to invest in the IRS’s enforcement toolbox by increasing the agency’s funding and giving it access to more third-party financial information. One solution they’ve proposed is requiring banks to report account information to the agency, which would help the IRS determine who is illegally misleading the agency about the income they are earning. More often than not, it’s extremely rich people: The top 1% of earners in the U.S. account for more than a third of all unpaid federal taxes, according to a recent analysis by the National Bureau of Economic Research.

GOP legislators argue against giving the IRS more financial information in the wake of the leak, however. Some Republicans say the IRS shouldn’t get more enforcement power or significantly more funding because the agency shouldn’t be trusted with more financial data and power. (Rettig announced in June that an investigation had been launched to determine whether the leak came from within the IRS.) “It’s a tough sell, I’ve got to tell you, right now,” Ohio Congressman Brad Wenstrup said at a recent Ways and Means Committee hearing.

The irony is that not passing the funding boost would further starve the IRS of security resources it needs to keep taxpayer information secure. In the absence of a substantial investment, the IRS will continue to struggle to do its primary job of collecting revenue during tax filing season—let alone bolstering security, modernizing tech systems, or effectively distributing cash benefits.

Democrats are still pushing to expand the agency. Biden’s new bipartisan infrastructure deal reportedly includes $40 billion in new funding for the IRS over a decade, which, at an average of $4 billion per year, would equate to increasing the agency’s current annual budget by roughly one-third. But the deal faces an uncertain future in the narrowly divided Senate.

Experts see a crisis looming if that money doesn’t make it to the beleaguered agency. “I have been increasingly concerned in recent years that there might be a significant failure in the filing season,” says Matthews, the former deputy commissioner. “Last minute tax changes seem to come later and later each year, with each new bell and whistle on old systems a potential failure point.” 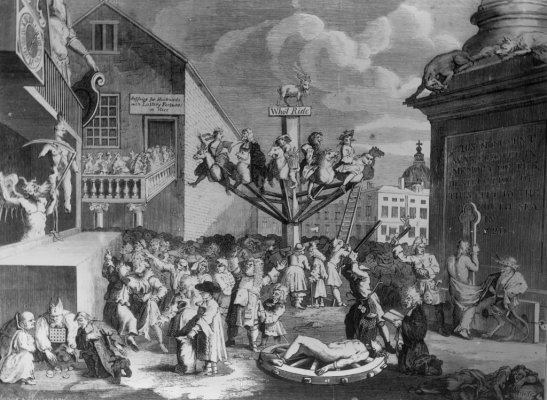 Today’s Crypto Fanatics Could Learn a Lot From Isaac Newton’s Money Mishaps
Next Up: Editor's Pick