Democrats' True Deadline Is Sooner Than You Think

Sen. Kyrsten Sinema and Sen. Joe Manchin in the elevator on their way to go to the Senate Chamber on Sept. 30, 2021 on Capitol Hill in Washington.
Kent Nishimura—Los Angeles Times/Getty Images
By Philip Elliott

If the stakes weren’t so high, the incessant obstruction of the Democrats’ agenda at the whims of Joe Manchin and Kyrsten Sinema could almost be comedy. Every time Democrats think they’re getting somewhere, one of the two quirky Senators pulls a fresh objection out of their hat, sending party leaders, including the President of the United States, scrambling.

But the reality of the Democratic double act is more tragic. The pair could end up costing House Speaker Nancy Pelosi her gavel, Senate Majority Leader Chuck Schumer his, and may well condemn President Joe Biden to start raising money for his library well before he had planned—and with fewer dioramas. In fact, Manchin and Sinema could end up flaying the Democrats for at least a decade if they continue to reject the massive—but shrinking—spending bill that is quickly following the lead of a fairy tale carriage and turning back into a pumpkin. In this telling, though, it’s the roar of Air Force One’s engines on Thursday that may end the magic and not a clock tower striking 12.

Democrats are racing to get a 13-figure pile of cash wrestled to agreement before Biden heads to Europe on Thursday for a trip that will, after stops in Italy and at the Vatican, take him to a crucial U.N. climate conference in Glasgow, Scotland. If Democrats can’t get him a spending package that dumps piles of cash on the climate crisis, it’s going to be tough for Biden to bring U.S. credibility to the table—and Democrats know this.

But Manchin and Sinema? They don’t seem to really care. Manchin is telling colleagues that he wants something around $1.75 trillion. Sinema says she won’t touch the tax code to pay for any of it. Biden had asked for $3.5 trillion but at this point might be happy with two nickels. And progressive lion Bernie Sanders has had enough with the footsie and is back to roaring about the need for $6 trillion in new spending. So raw has the rancor become that last week Sanders and Manchin shouted dueling numbers at each other until Manchin said what typically isn’t spoken in D.C. right now: “I’m comfortable with zero.”

Separately, a transportation funding bill expires on Sunday. Congress has already extended it on a temporary basis but thousands of projects could grind to a halt if lawmakers can’t re-up it as part of the bipartisan spending plan that has cleared the Senate but remains parked in the House until Democrats reach an outline for trillions in so-called human infrastructure. So sullen are Democrats’ hopes that Sen. Tom Carper of Delaware, the chairman of the Environment and Public Works Committee, has drafted a one-month stopgap resolution to keep the orange construction cones in place.

So once again, Democrats are crashing against a wall of deadlines. Biden decided to pile so much of his first-term agenda into an enormous spending package that in an early estimation gave him the best shot of a one-and-done victory. But as talks continue and Manchin and Sinema show their independence, Biden’s Democratic wish-list is starting to resemble a tree trunk that’s been whittled down to a toothpick. (To be fair, a $1.75 trillion toothpick is still roughly a trillion dollars bigger than Barack Obama’s economic stimulus package from 2009.)

For her part, Sinema remains an enigmatic obstructionist. She has made clear she doesn’t want to raise taxes on individuals or corporations but hasn’t really offered an alternative. She holds up Sen. John McCain, a Republican, as a mavericky role model. But Sinema seems to lean in to her thorn-in-the-side role more than coming up with anything productive. Even the negotiators aren’t sure what she’s looking for.

The other problem is that Manchin doesn’t want to approve anything that might leave him vulnerable with the small but powerful coal industry in his state of West Virginia, especially given the state was second only to Wyoming in supporting former President Donald Trump’s re-election bid. As a result, he’s finding every available excuse to find fault with the legislation, including his latest objection: providing healthcare to poor people in deeply Republican states.

That’s right. Under Obamacare, states could opt to expand Medicaid coverage to poor residents at a deep discount. States had to cover 10% of the costs while the federal government—or, more accurately, taxpayers in wealthier states—covered the 90% balance. A dozen Republican-controlled states chose not to sign up. Some argued the 10% share was a trap that would leave them on the hook down the road, and others just didn’t like the fact it was part of Obamacare. An estimated 2.2 million Americans were left in the gap, and Democrats wanted to get them coverage through part of Biden’s big spending plan, even if that means the feds would cover 100% of the cost.

Well, Manchin says no. He says it’s unfair to states that are already paying a 10% share of the price tag for healthcare. (And he has a point about freeloader states in the health care system.) And he has some allies in the form of intense lobbying to spike plans that would let Medicare to negotiate drug prices and to cover vision, dental and hearing health. What started as a plan to rebuild bridges now includes root canals—a perfect encapsulation of just how far Democrats’ ambitions have grown on these talks.

But for all of the headaches Manchin is giving Democrats, they aren’t ready to toss him overboard on his houseboat on the Potomac. Manchin himself has admitted he’s out of step with 48 of his colleagues during a dinner last night at Cafe Milano. But he’s also not going to buck the party. Manchin is a frustrating member of the Democratic caucus, but he’s no Republican. Which is why, in a 50-50 Senate, he is wielding so much power. Republicans aren’t wasting the energy to flip him, and Democrats aren’t worried about a defection. They just have to manage to give him what he wants when he draws a red line.

Sinema on the other hand? She remains a mystery. Democrats have tolerated her theatrics but they’re reaching the end of their patience. Democrats have an understanding of Manchin’s principles, so they work to meet them; the same Democrats aren’t sure if Sinema has any.

Biden and his allies are just trying to get something that could let him take a lap—or a trans-Atlantic flight, as the case may be—and declare victory in Europe. Democrats have control of the House, the Senate and the White House, albeit with the slimmest majorities imaginable. The stakes for Democrats are as high as ever. And with the political environment looking dour heading into midterms, now just a year away and historically damning for the party in the White House, Biden needs to score a point now—or be kneecapped. With a little more than a day to go before Air Force One heads to the tarmac out at Joint Base Andrews, he’s racing to get anything that approximates a win. 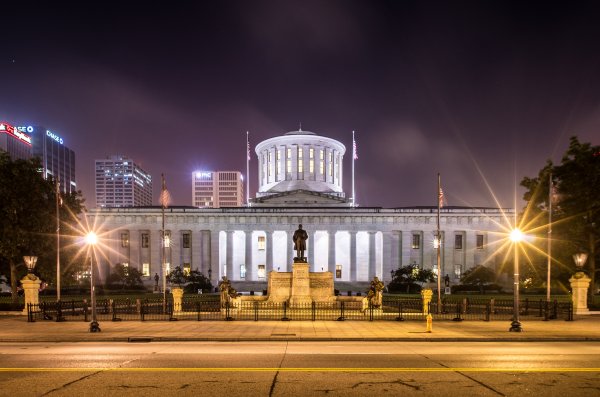