CBS Renewed Love Island Despite Lackluster Ratings. Can the Show Find its Happily Ever After in Season Two?

On July 29th, a record 3.6 million British viewers tuned in for the live finale of reality-show-become-social-institution Love Island’s fifth season. That’s just over 5 percent of the U.K.’s population.

Last week in the U.S., meanwhile, just 2.5 million saw the finale of the U.S. reboot’s first season, according to recently-released Nielsen figures. (For comparison’s sake, that’s closer to 0.75 of the American populace.)

If you weren’t one of those viewers, a quick primer: Love Island’s Big Brother-meets-Bachelor premise involves abandoning a group of tanned, toned and glamorous young people in a luxury villa. There, they must “couple up” or risk being kicked off the show. With a heady combination of sex, scheming, and glistening suntans, the show has won legions of fans worldwide; the format has been bought and re-produced in countries across the globe, including Australia, Finland, Germany and Sweden, before debuting on CBS for a stateside audience this summer.

CBS bookmarked primetime time-slots five nights a week for Love Island — a major commitment for the network, even amid the slower summer season. And, in many respects, a big risk too.

The show followed in the fast-fading footsteps of Fox’s flop Paradise Hotel reboot. Like an increasing majority of new U.S. dating shows, Paradise Hotel failed to gain traction in a broadcasting space dominated by The Bachelor franchise, and was canceled after only four episodes. (Perhaps notably, the Bachelor behemoth never took off in the U.K.)

Love Island didn’t suffer quite the same fate, but its ratings were consistently tepid. The show premiered to just 2.6 million viewers, and averaged closer to the 2 million mark in the following weeks, despite aggressive promotion on other CBS shows and across social media.

“CBS ordered Love Island to try something bold and different,” a CBS spokesperson tells TIME. The first weeks of episodes apparently saw a “significant” increase in millennial female viewers, the spokesperson adds. The show has at times won its time-slot specific to that demographic (though Neilsen ratings for the 18-49 demographic as a whole remained stagnant).

As The Guardian reported, British producers “had to counsel foreign TV executives that they might have to accept low television ratings for the initial series as an investment in the format. They are told that this will pay dividends if they follow the established playbook on making a show go viral on Instagram and YouTube.” And Love Island U.S. has proved popular on streaming platforms — as Vulture notes, “reaching non-traditional CBS viewers is no small thing, particularly in the weeks leading up to the fall season.”

American viewers got their own 'LOVE ISLAND' experience this summer, to mixed results.
CBS Broadcasting, Inc.

Similarly, Love Island “was not an out of the box hit in the UK,” the CBS spokesperson tells TIME, but “built slowly… as word of mouth increased.” (Sensationalized coverage of the contestants’ ‘sexploits’ in the British tabloids certainly helped in this regard.) So the show’s renewal for a second season, to air in 2020, should perhaps be no surprise.

“The passion of Love Island‘s audience is incredible,” CBS entertainment president Kelly Kahl said in a statement accompanying the news. “The intensity of their social media engagement has created tremendous enthusiasm for the series. We love the show’s creative execution and can’t wait for next season.”

But if U.S. viewers — particularly the young women CBS is intent on courting — are going to enter into a long-term relationship with Love Island, what does the second season need to do, and do better?

CBS shot Love Island in Fiji, where it also bases its hit reality series Survivor for up to five months each year. But really, a familiarity with the Fijian climate means executives should have seen the rainclouds and stormy weather — which put a literal damper on the show’s early episodes — coming.

Finding a more consistently clear-skied, sunny locale should be one of the first things on the second season’s pre-production wish list. Kissing in the middle of a downpour is almost never as romantic as in The Notebook, basically.

To a greater extent than many of its reality competitors, Love Island is a character-driven show. The right mix of players, hopeless romantics, oddballs and abs is crucial to a season’s success, and this is a science British Love Island producers have down to an art. Take 2017 contestants’ Chris Hughes and Kem Cetinay bromance, 2018 alum Megan Barton Hansen, whose “muggy” antics begat a feminist narrative, or this year’s Ovie Soko, who proved so popular with viewers that a petition was created to allow him to win the show on his own. (It was rejected 12 days later by British Parliament; Soko and his partner on the show eventually placed 3rd.)

In comparison, the U.S. cast failed to rise to the occasion collectively, despite a few breakout characters in Caro, Kyra, and the gone-too-soon Cashel. Whether down to jitters, a lack of chemistry, or a desire to play it safe for the end-game, there was a palpable lack of authentic personalities, narrators and perhaps even real-deal fun.

The hook-ups (and throw-downs).

With a cast ready and willing to fall in love — or at least into a ‘showmance’ — Love Island literally depends on producing an environment ripe for making magic happen. “It’s human nature to be interested in the private lives of others,” Honey Langcaster-James, a media commentator and TV psychologist who worked on one of the U.K. show’s first seasons, tells TIME. “In particular, it’s very common to be interested in [their] love lives,” she says.

Langcaster-Jones believes Love Island’s popularity is in part due to that innate, voyeuristic pleasure — the bedrock of the reality TV genre, really — so many get in watching people’s emotions and intimate relationships play out in real-time. The show’s soap opera storylines and relentless romantic drama also speak, in particular, to a social media-savvy generation with an appetite for narratives which can be told, retold, dissected and exaggerated. It’s fair to say few, if any, of the Love Island U.S. couplings elicited much emotion, or discussion worthy of millennials’ group texts.

On the flip-side, the show was also lacking in dramatics. Love Island U.K.’s producers have often been accused of manipulating contestants to elevate drama — forcing them into feuds as often as they fall into romances. “They would run around the villa [saying] ‘someone said this about you’, or ‘you need to talk to X about this,'” Malin Andersson, who rose to fame on the British show’s second season, tells TIME of those staffers ‘behind the curtain.’ “They’d s**t-stir, basically.”

Contestants on Love Island U.S. rarely seemed to rise to this bait, and certainly not with much enthusiasm. The show’s winners, Zac Mirabelli and Elizabeth Weber, said in a post-show interview that they formed a “popcorn club” with other couples with a view to sitting back and watching any conflicts happen from the sidelines, rather than involve themselves. “There were no meltdowns, no showdowns,” a New Yorker review noted. “’I hope I don’t step on anyone’s toes,’ Katrina Dimaranan, a beauty queen, said, on being sent into the house a week after the season began, apparently having misunderstood the show’s premise.”

And the great British banter.

Love Island U.S. proved to be more of a family-friendly affair; less barely-there swimwear, less bad language, and definitely less hook-ups than the Brits get up to. “We have to conform to broadcast standards,” the show’s executive producer David Eilenberg explained to Entertainment Weekly.

But much of Love Island‘s appeal comes from its ridiculous catchphrases, campy games and slapstick innuendo — none of which is rated-R. Both the U.S. show’s host, Arielle Vandenberg, and voice-over artist, Matthew Hoffman, seemed to grow into their respective emcee roles as the season progressed. But the irreverent sense of humor (a tongue-in-cheek, joke’s-on-everyone attitude) that pervades the British show was largely missing — perhaps lost in translation?

“For the most part, Love Island USA will be pretty similar, but we’re going to put our own spin on it for sure,” Vandenberg told TIME over the phone from Fiji. And yes, all the hallmarks from which the American spin-off could need to borrow from were there. But the formula didn’t quite fall into place and, despite all the above advice, perhaps that is because U.S. producers kept to Love Island‘s British canon too closely. The same challenges, same elimination patterns, even the same brief bisexual flirtation.

Both the CBS reality juggernauts mentioned above, Survivor and Big Brother, were adapted from European shows with shrewd tweaks for a U.S. audience. Survivor borrowed from the British/Swedish reality show Expedition Robinson, while Big Brother grew into the back-stabbing strategy-fest it is today after abandoning the public-vote model popular in other countries.

For Love Island U.S. to truly succeed then, maybe it needs to break-up with its long-distance partners and find the commitment it’s looking for in itself. 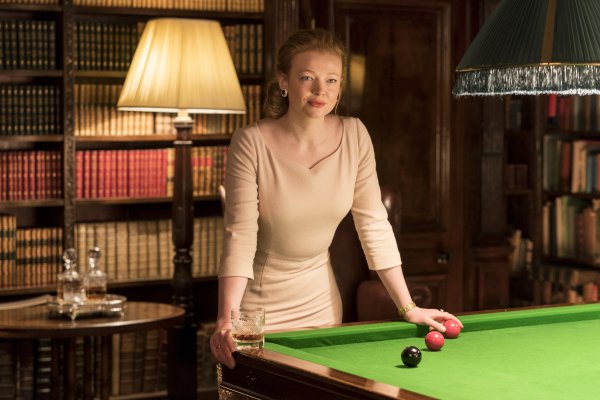