REVIEW: Obvious Child: Do Not Abort This Movie!

Donna Stern’s set at a Brooklyn comedy club hits the usual notes for a female standup artist: vagina vagina, bagel synagogue, underwear malfunction. etc. Her routine, though, is anything but. Donna (Jenny Slate) is a confessional comic, free-ranging through a private life she makes painfully public. She goes beyond “beating myself up”; she also tells all about her current boyfriend and his “working dick.” Exorcizing her romantic demons not in songs but in gossip with X-rated punch lines, Donna is a regular Taylor Schmutz.

The peril of confessional comedy is that, unless you’re the kid on the raft in Life of Pi, you’ll be telling the secrets of other people too, and they may not care to be part of your act. After the set, Donna’s beau (Paul Briganti) breaks up with her because he’s tired of their intimacies being turned into shtick. Also, he’s got a new girlfriend, whose texts he can’t help checking. Donna: “You’re looking at your phone while you’re dumping me!” Quickly rebounding by hooking up with a nice guy named Max (Jake Lacy), Donna loses her day job at the Unoppressive Non-Imperialist Bargain Books store — yes, it exists, in Greenwich Village — and discovers she’s pregnant. Telling herself angrily, “You played Russian roulette with your vagina,” she visits Planned Parenthood and gets a date for the abortion: Valentine’s Day.

Can Gilliam Robespierre’s Obvious Child really be the first romantic comedy about a woman who wants an abortion? Ages ago, on network TV, Bea Arthur’s Maude did more than think pro-choice; she went through with it, a year before the Supreme Court’s Roe v. Wade decision. In the intervening 42 years, this legal surgery has been performed some 57 million times — not as often recently, but still about a million a year. In New York City in 2012, African-American women had more abortions than live births. It’s a common if controversial operation that perhaps one in three American women have undergone.

Yet American movies do handsprings to avoid the subject, even in stories about unwanted pregnancies. Indie films like Juno and Blue Valentine find excuses for its unwed or unhappy women to sidestep the procedure. In Judd Apatow’s ostensibly edgy Knocked Up, Seth Rogen impregnates Katherine Heigl on a drunken one-night stand, but neither party seriously considers abortion. Rogen’s buddy Jonah Hill won’t even say the word: “It rhymes with shmuh-shmortion.”

(READ: Avoiding the abortion question in Knocked Up)

So, almost by default, Obvious Child is “the abortion comedy” the way that 4 Months, 3 Weeks and 2 Days, Cannes’ top prize-winner in 2007, was called “the Romanian abortion film.” Donna — whether lonely and depressed or, on a good day, coddled and cuddled — is determined to end her pregnancy. The question of her going through with it takes second place to the suspense of, yes or no, telling Max he’s about to be a non-father. And both issues are less important to the success of this endearing little movie than Donna’s comic spin on her miseries and Slate’s bravura turn in the title role.

With guy movies relying ever more heavily on testosterone antics, it’s only fair that women’s movies become not just estrogenic but estrogenerous. Obvious Child goes further than fluttering protectively over Donna’s problems; it provides a large support team to advise her. Each of her separated parents — comedy-writer dad (Richard Kind) and college professor mom (Polly Draper) — is allotted two scenes, one nurturing, the other less so. Donna’s gal pal (Gaby Hoffmann) and mandatory funny-sensitive gay friend (Gabe Liedman) also sing backup to her blues. And Max, from Word One, is the dream boy, decent and sympathetic, talking moonily of fatherhood. On a restaurant date, he holds a wrapped butter pat in his hands to thaw it for Donna. I think I’d want to bear his child. But she doesn’t.

Robespierre, who enlarged her 2009 short (also starring Slate) into this first feature, honors the femme-com conventions — bad beau and good beau, a heroine who fixates on her troubles instead of her assets — which allows the filmmaker to ignore a few dangling propositions in the plot. (Like, how did Donna, who proclaims herself broke, get the money to finance her Planned Parenthood visit?) But Robespierre’s direction of the many fine actors she assembled is assured, her sense of pacing nicely loose-limbed. The real inspiration is Donna, a complicated character who — given all the love she receives, and all her self-pity — could also be exasperating. Robespierre’s great stroke of fortune was picking Slate, a veteran of many comedy shows (SNL, Parks and Recreation, Kroll Show) for her first leading movie role.

The actress has a the growly voice of a child trying to talk like an adult, and a lovely, perky, extraordinarily malleable face that can go flirtatious, frowny or beatific within seconds. In violent emotional colors, Slate paints a character whose comic gift is an affliction: if a piquant thought strikes Donna, she’ll blurt it out and damn the consequences. Being a truth-teller with Tourette’s is consistent with Donna’s roiling inner life. As likely to well up in tears as make somebody laugh, she’s part Sarah Silverman, part Maria Callas. Slate attacks the role — from the inside — with an acute ferocity that might subvert the movie’s mostly jaunty tone if she weren’t such a stupendous pleasure to watch.

The performance could be either a fluke or a star-is-born launch. Either way, in this pretty sharp abortion comedy, Slate is great. 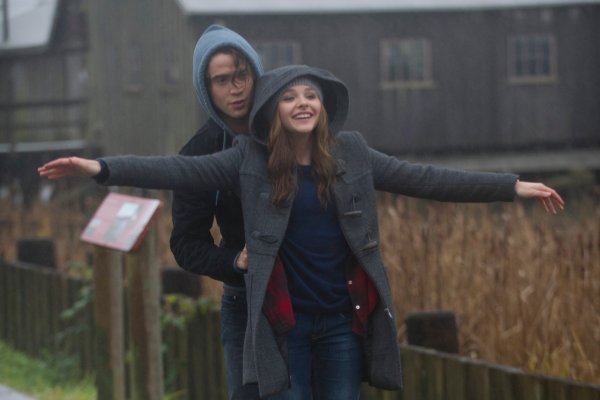 Is If I Stay The Next Fault In Our Stars?
Next Up: Editor's Pick