Debating How Space Jam: A New Legacy Stacks Up Against the Original

For many in the TIME newsroom, the original Space Jam holds a hallowed place in our memories. The movie was practically a totem of childhood in the ‘90s: MJ! Bill Murray! Hip-hop’s golden age!

Given this lasting goodwill, it’s entirely unsurprising that Warner Bros. decided to try to replicate its success for a new generation of tykes with Space Jam: A New Legacy. Michael Jordan has been replaced by his generational heir, LeBron James; the Looney Tunes have been upgraded with furry, fuzzy 3D rendering. But the reboot has been divisive so far: while audiences have largely left theaters happy, critics have mostly dunked on the film.

Over opening weekend, TIME staffers watched the film on HBO Max; here are our thoughts and reactions.

Critics largely hated Space Jam: A New Legacy, but audiences gave it an A- in Cinemascore exit polls (the same grade that the original received). Which group is right?

Andrew R. Chow: The critics. So much about this movie actively made me angry: the “updated” animation of the Looney Tunes (the dewiness of Porky Pig’s forehead made me want to never eat bacon again); the forced gravitas (at times it felt like a movie not for kids, but for dads working through their control/anger issues); the overreliance on references (not so much jokes as an executive poking your ribs and yelling, “Hey, remember when you watched this other thing?”).

I was constantly confused at who this movie was made for: many of the Looney Tunes punchlines will be cringe-inducing to anyone over six, but what six-year-old is going to understand the constant homages to films like Mad Max and Casablanca? Meanwhile, the movie actually fulfills the mission of its villain, Al. G Rhythm (Don Cheadle): to exploit a mishmash of tired IP and trap the hero in digital purgatory forever, all for the purpose of Warner Bros.’ continual profit.

Eliana Dockterman: Andrew, I think I have the answer to your question about who this is for: Nostalgic millennials considering subscribing to HBO Max. The whole movie is basically an ad for all of the movies and shows streaming on the service right now. Which, O.K., fine, maybe we should have expected that. But at least if you’re going to make a giant ad, make it fun! Come up with a way to jam Game of Thrones and Harry Potter into your movie that’s more creative than throwing a blonde wig on Fog Horn Leg Horn to make him look like Khaleesi and a Hufflepuff scarf on LeBron.

Honestly the most fascinating part of this movie is that LeBron—the hyper-competitive player who, as the villain Al. G Rhythm points out several times, abandoned Cleveland, Miami, and Cleveland again—thinks he’s a loyal Hufflepuff and not a Gryffindor or (dare we say it?) a Slytherin.

Cady Lang: Eliana, you’re completely right—the Space Jam reboot was less the nostalgic, fun-filled romp we had hoped for than it was an hour and a half long vehicle for showing the vast offerings on HBO Max. As much as we love a cheeky pop culture reference (and the original Space Jam was full of them!), they’re best as the seasoning, not the substance of a film. Also, LeBron is absolutely a Slytherin. No one has that many rings without the ruthless ambition of a Slytherin.

ED: These are exactly right. Also to be clear, MJ is a pure Slytherin and proud of it, I’m sure. We love him all the more for it.

But critics didn’t like the original Space Jam, either. Are we sure that the original is actually good, and that we haven’t just become this Simpsons meme?

ARC: This is a tough one: it’s incredibly difficult to disentangle my love of Space Jam from my five-year-old self, who lived and breathed basketball during one of the NBA’s most epic stretches. While I hated most non-Knicks with a passion, you couldn’t not love MJ: I had his sticker books, figurines, trading cards, jerseys; I remember putting my hand inside a cement imprint of his at the 1998 all-star game in New York. You can still find drawings at my parents’ house of Michael, tongue out and leaping over Vlade Divac, in which I scribbled in the margins about how I was going to soon join him in the NBA. A movie that deified him AND gave me wacky cartoons was always going to win over my pea-sized brain.

But here’s the thing: I watched Space Jam over the pandemic, when thousands of people across the nation were also regressing into their childhood selves—and it holds up! The pacing is snappy; the side characters are hilarious (Wayne Knight is perfectly cast and commits 100%), and there are sly innuendos that I completely missed during my first 20 viewings. The film didn’t bother with all this solemn emotional labor that the new movie attempts: it knew it was absurd and juvenile. Space Jam: A New Legacy, in its eager-to-please maximalism, is like wandering through a poorly organized Comic-Con.

ED: I may be even more biased than Andrew. I grew up a ‘90s kid in Chicago weaned on Bulls games. Some of my earliest childhood memories involve waving from the stands for a chance to catch Dennis Rodman’s disgusting, sweaty jersey. I also was nurtured on a steady diet of original Looney Tunes cartoons, recorded on VHS tapes that I would pop into our VCR every Saturday morning. I may or may not have dressed up as Lola Bunny for several Halloweens in a row as a kid.

(By the way, the whole debate over whether Lola Bunny is “sexy” that arose when Warner Bros. released her New Legacy redesign has ruined my childhood and scarred me for life.)

But I agree that Space Jam is unassailable. While the plot of New Legacy is convoluted, Space Jam ventured to answer one simple question: Why did Michael Jordan return to basketball? “Bugs Bunny told him so,” obviously is not the real answer. And anyone who has watched The Last Dance can tell you the reasons are complicated: Jordan finally had time to grieve his father’s death; his competitive drive no doubt played a role. But for the most famous and powerful player in the history of sports to deflect deep questions of personal motivation with a cartoon is kind of genius. Also, dear God, Bill Murray is always wonderful.

The original soundtrack is classic. How does the new one stack up?

ARC: Most of the new soundtrack is corporate rap at its worst; the Porky Pig rap makes James Corden’s Drop the Mic look like 8 Mile. The soundtrack sounds like some executives thought “Rap Caviar” meant “rap conceptualized by people who regularly eat caviar.” The 1996 Space Jam cut “Hit Em High (The Monstars Anthem),” in contrast, made me feel like I had just chugged two Capri Suns and wolfed down a Nerdz rope. I would rewind the cassette over and over, manically running around my room, yelling and doing ferocious dunks on my Fisher Price four-foot plastic hoop.

ED: Original soundtrack strictly dominates. I dare you to hear the words “Come on and Slam and welcome to the Jam” during a workout and not hit a personal record.

CL: Like the film it accompanies, the new soundtrack is too long and could have benefited greatly from a more thoughtful curation. The original soundtrack, though, slaps—the Monstars anthem still gets me hype.

ARC: LeBron is the funnier comedic presence in general, with his constant mugging at cameras, cheesy dad captions on Instagram and “TACO TUESDAYYYYYYS.” He’s stunningly weird in Trainwreck as Bill Hader’s miserly, nerdy best friend (and the scene in which he recites “Gold Digger” puts the performance in the Mount Rushmore of athletes doing comedy).

Which is why the way he is written in Space Jam: A New Legacy is such a wasted opportunity: for plot purposes, he is forced to be an overbearing dad, whereas he should have been cast as a complete goofball. MJ was perfectly adequate in the original as a straight man absorbing surrounding hijinks. (Charles Barkley is also hilarious!) LeBron, with his ponderous try-hardiness, ends up being a lot worse than either.

ED: A couple years ago, I would have said hands down LeBron is a better actor based on Trainwreck. But then I saw The Last Dance and Space Jam: A New Legacy, and wow MJ is great in The Last Dance. I’m not saying that he is necessarily acting in the ESPN documentary. I am suggesting that he was probably aware that some of his facial expressions in that doc were extremely memeable and would probably go viral. And you know what? We ate it up.

In fairness to LeBron, Jordan has a lot more time to work on his meme faces in the mirror these days. LeBron, I think, remains too busy on the basketball court to actually carry a whole movie. There’s a scene in the film in which the LeBron character tells a studio that he can’t be an actor because he can’t take time away from the court. Fair enough. Except then, of course, he made this movie. And I couldn’t help but wonder if the comedy fell flat exactly for the reason he stated: His heart’s not in it.

CL: Years of dramatic flopping performances and Trainwreck definitely make a compelling case that LeBron is the better actor, but I have to agree with both of you that Jordan was far more magnetic in his film than LeBron was in the reboot, which may have had everything to do with the fact that he had far less to prove at that point, both on and off the court. For the contemporary sports superstar as multi-hyphenate, Jordan is the blueprint and he’s set the bar high. Like the endless GOAT debate, it’s clear there’s still more for LeBron to accomplish in the future.

Al G. Rhythm has taken your son hostage and demands you make another remake of Space Jam that’s better than either version. Who is the dream team of star baller, director and character actors that you’re bringing with you on this quest?

ED: Woooooow! How am I supposed to top Andrew’s lineup?

I’m trying to think of any good movie performance any NBA player has ever given and can only come up with Airplane-era Kareem Abdul-Jabar. So let’s go with a very silly, irreverent Airplane-style film starring young Kareem. I want to tempt Jordan Peele to return to comedy writing/directing for this project, which means, inevitably, Keegan-Michael Key is going to need to be in this cast. The Rock plays a charming bad guy.

CL: Taking heed of MJ’s personal pick for a lead for the Space Jam reboot, I’d go with Blake Griffin as the lead, whose impeccable talents as a comedian were shown to great effect on Broad City, among other gigs. I’d ask NBA superfan and die-hard Knicks loyalist Spike Lee to take the helm and would include a cameo of Drake, the league’s most obnoxious celebrity fan, on the sidelines.

Write to Eliana Dockterman at eliana.dockterman@time.com and Cady Lang at cady.lang@timemagazine.com. 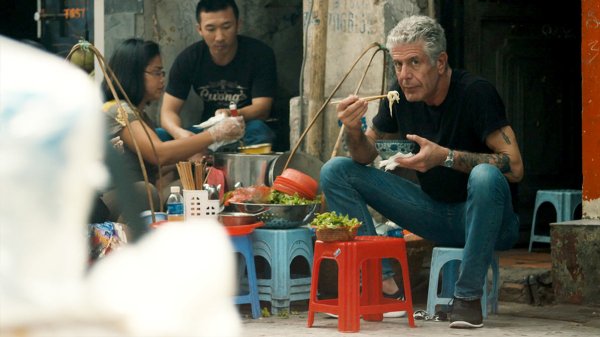 Roadrunner Illuminates Anthony Bourdain the Man—But Are Its Means Totally Legit?
Next Up: Editor's Pick