Even by the standards of teen TV in the early ’90s, Saved by the Bell was awful. Its scripts—a litany of indistinguishable classroom pranks, romantic rivalries, sexist jokes and school dances—might as well have been written by aliens whose sole window into earthling culture was Seventeen magazine. While superficially somewhat diverse, the show took place in a fantastical Southern California that had never heard of racism, economic inequality or LGBTQ people. In retrospect, its protagonist Zack Morris, a blond schemer endowed with the inexplicable ability to temporarily freeze time, possessed all the traits of a budding sociopath (as many have noted). Meanwhile, NBC apparently thought so little of the series’ young audience that it shamelessly recycled plots; aired episodes wildly out of order; and, in the final season, handled the early departure of two female leads by hiring one new actor and alternating her episodes with theirs.

The thing is, I only know all of this because the show was a ubiquitous presence throughout my childhood. I watched and rewatched all 99 episodes (that number reflects the show’s absorption of the one-season Hayley Mills vehicle it spun off from, Good Morning, Miss Bliss), in syndicated after-school blocks, while doing homework. The short-lived sequel series Saved by the Bell: The College Years was my introduction to primetime. I wore out homemade VHS recordings of made-for-TV movies Hawaiian Style and Wedding in Las Vegas. And now I, along with millions of other nostalgic first-gen SBTB fans, am the reason the show is back to ruin our lives all over again. As lighthearted and silly as it is, the revival turns out to be a weirdly poignant reminder of what a rough few decades it’s been—especially for so-called ’90s kids.

To their credit, the makers of the new Saved by the Bell, which comes to Peacock on Nov. 25, clearly understand how much TV and the world it (sort of) reflects have changed since the original sitcom ended in 1993. Billed as a “reimagining” and helmed by 37-year-old writer and executive producer Tracey Wigfield (30 Rock, Great News), it’s cut from the same self-aware cloth as last year’s Beverly Hills, 90210 meta-revival. The biggest difference—one that’s reflected in the show’s Thanksgiving Eve premiere date—is that, while the 90210 sequel appealed exclusively to adults who loved the West Beverly High crew as teens, SBTB aims to reel in the whole family.

Here is the almost-unbearably-2020 premise: after accidentally becoming governor of California as part of a gambit to get out of a parking ticket, the charismatic but deeply incompetent Zack Morris (a freshly bleached Mark-Paul Gosselaar) cuts $10 billion from the state’s education budget, forcing the closure of several underfunded public schools. To defuse the rightful outrage of his constituents, Governor Zack sends some of the displaced kids to good ol’ Bayside High—where his and “still smokin’ hot” wife Kelly’s (Tiffani Thiessen, whose appearance in the premiere could generously be described as a cameo) son Mac (Mitchell Hoog) is now a student.

Into this time capsule from an imaginary past come the “real” (read: Black and Latinx) teens of the newly shut-down Douglass High. DeVante (Dexter Darden of the Maze Runner movies) hides loads of musical-theater talent behind a disengaged exterior. Dazzled by Bayside’s amenities—and by Jamie—Aisha (Alycia Pascual-Pena) is a star player on the boys’ football team. Her best friend Daisy (an effervescent Haskiri Velazquez), an achiever who’s skeptical of her spoiled new Bayside classmates, is the closest thing the show gets to a hero. “I know our school library was just a Bible and a bunch of Army pamphlets, but I’m as smart as any kid here. No, smarter!” she insists. “If you don’t have an iPad, if you ride the bus, if you’re not one of them, you’re set up to fail.” And, yes, it’s Daisy who inherits Zack’s fourth-wall-breaking power to declare a “time out.”

This is how the new SBTB manages to have its ’90s nostalgia and critique it, too. Xennials get to see characters who feel like old friends again—though in the three episodes I previewed, only Lopez and Berkley are regular presences. Wigfield flatters her fellow 30-somethings by using rapid-fire, 30-Rock-style jokes to poke fun at the original series; when clear-eyed Daisy intervenes in a ridiculous conflict brewing between Mac and Jamie, Lexi protests that “no one in the history of Bayside has ever short-circuited a gentlemen’s prank war.” As the Governor Zack setup fades into the background of a show that ends up being mostly about the kids, younger viewers get a smarter-than-average teen comedy that is, probably, a bit confusing if you don’t get all the references to its predecessor.

Theoretically, the whole family can come together to appreciate the show’s updated worldview. Totah, a 19-year-old former child actor who came out as a transgender woman in a 2018 TIME essay, is the strongest performer in the franchise—and she has its best character in Lexi, a bratty, acerbic trans girl with her own reality show in the I Am Jazz mold. Without minimizing Lexi’s gender identity, Wigfield smartly declines to frame it as Very Special Episode fodder. Less elegant is the revival’s juxtaposition of privileged Baysiders and their bused-in counterparts. The show is thoughtful enough to underline that not every rich kid is white. But, as Daisy’s library joke suggests, Wigfield (like her mentor Tina Fey) can get so pessimistic in her depictions of systemic inequality as to verge on trivializing it. Despite the show’s self-awareness, there’s something uncomfortable about how much time the Douglass contingent spends educating peers. “When you’re poor,” Daisy tells Mac, “you’re worried all the time, even if you’re a kid.”

Could there have been a more organic way to bring SBTB up to date? Why not simply remake Bayside as a real, diverse school whose student body isn’t so wealthy and culturally homogenous? After all, the original series might as well have taken place in the Xanadu Unified School District, rather than in the real Pacific Palisades. The answer, I think, is that the show’s broad, carefree, almost magically aspirational vision of teenage life was all it ever really had to offer and the only part of it worth bringing back. That’s what made it so attractive to kids in its heyday and, as much as we might chuckle over its contrived plots or its stereotypical characters now, such an enduring object of nostalgia.

To a certain extent, that’s what my microgeneration is longing for when we reminisce about the TV and movies of our youth: a time before social media, the 24-hour digital news cycle, the hollowing out of the American middle class and an infinite number of smaller changes forced the average, privileged teen to develop an awareness that many people have bigger problems than choosing a prom date. To grow up in the ’90s was to be raised amid relative peace and prosperity, with little cause to worry that cataclysms like 9/11, wars in Iraq and Afghanistan, the Great Recession, climate change, Donald Trump and finally COVID would leave us in far worse shape than the generations before us. Even young people who didn’t benefit from structural advantages such as whiteness and wealth had reason to believe that things would get better. It wasn’t hard to convince yourself that, say, an antediluvian Zack Morris cell phone or a Lisa Turtle clothing budget was within reach.

The disconnect between then and now is, in part, what has made the mass reanimation of ’90s teen and family entertainment—which is, of course, only a small facet of the nostalgia-industrial complex that’s thriving in this age of endless content—so hard for me to sit back and enjoy. Along with SBTB, the past month has seen the reemergence of Animaniacs and The Craft. Last week, not long after ordering two seasons of a Fresh Prince of Bel-Air reboot, HBO Max uploaded a moving 30th-anniversary reunion of the original actors. Peacock is going especially hard on these revivals, with a new Punky Brewster as well as a Clueless riff starring Dionne in the works. In a similar vein, Comedy Central is preparing a spinoff of MTV’s Daria that focuses on Lawndale High’s much-admired, perennially exhausted Black valedictorian, Jodie Landon.

It’s no surprise that many of these titles, like Fuller House and BH90210 before them, have a conspicuously aspirational slant—one that revivals have generally attempted to maintain but temper with slightly more inclusive casts and varying degrees of self-deprecation. (Gossip Girl, the last trendy rich-kid drama to hit before the financial crisis and the rise of Twitter, is also returning via HBO Max, with more characters of color in the mix.) In other words, the writers pass on their cognitive dissonance to the viewer, and even the most lightweight material gets freighted with the pathos of a generation.

As adults in an America that’s simultaneously more aware and less optimistic than we expected, ’90s kids seek comfort in the simplistic pop culture of our childhood. But as time passes, those artifacts’ blindspots get harder to ignore. Continue to cling to this stuff, and you risk becoming as reactionary as boomers who still long for a Norman Rockwell ’50s. Try to fix it, and you get a punchy, intermittently inspired, well-intentioned mishmash like the new Saved by the Bell. 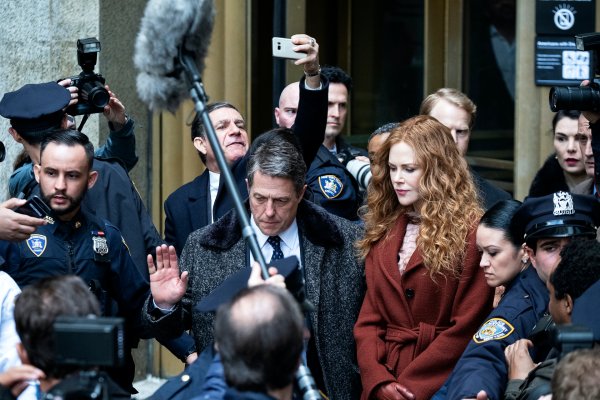 A Psychologist Weighs in on 'The Undoing'
Next Up: Editor's Pick