The Apatowian romance between Schumer and Hader plays out in typical rom-com conventions.
Universal Pictures
By Lisa Schwarzbaum

The subject of Trainwreck is a person, not a railway accident. The description is apt. The romantic comedy–much anticipated by the many fans of comedians Amy Schumer (who writes and stars) and Judd Apatow (who directs)–follows Schumer’s fictional Amy, a 30-something woman barreling toward psychological disaster while disguised as a good-time girl content with a life of all sex, no strings and lots of booze. With the mantra “Monogamy isn’t realistic” instilled in childhood by her less-than-ideal dad (Colin Quinn), Amy has settled into adulthood believing that her meaningless one-night stands are expressions of empowerment. And by day she’s employed writing shallow stories for a coarse men’s magazine. Watch Tilda Swinton in her mad, inspired turn as Amy’s monstrously cynical editor and you’ll understand all you need to about fears for the death of print.

Amy comes undone when she is assigned to write a profile of an accomplished, compassionate sports doctor who works with star athletes. His name is Aaron. He is charming, cute, quick-witted and unneurotically affectionate. Played with charm, cuteness and quick wits by Saturday Night Live MVP Bill Hader, Aaron messes with Amy’s brittle world by mattering. She has not planned for feeling feelings; after all, she regularly mocks her younger, married, motherly sister Kim (Brie Larson) for all that boring normality.

Naturally love triumphs in the end, because for all the gimlet-eyed girl raunch we associate with Schumer’s brilliant Comedy Central series, Inside Amy Schumer, and all the goofy man-boy raunch we have come to expect from Apatow productions like Knocked Up and The 40-Year-Old Virgin, this is a classic studio rom-com. Along the way, Amy does a lot of stuff to mess things up before she is ready to consider a healthier lifestyle and the pleasures of a man who loves her, whom she loves back.

In the way of most Apatow films, Trainwreck is a little too long, a little too shaggy and a little too conservative in insisting that all’s square in love and war. It’s Schumer’s script, to be sure, drawing on aspects of her past. But it is also her first feature-length work, and the gifted sketch artist with a radar finely tuned to feminine sexuality may have received distracting narrative and tonal guidance. On the one hand, Amy is a really unpleasant, selfish, at times willfully dumb woman who hurts men and women with equal, unfunny disregard. On the other, Trainwreck dwells lovingly and forgivingly on Amy’s relationship with her father (who, like Schumer’s, has MS and is divorced from her mother). He’s a bigot, a womanizer and a boozer who insults everyone while assuring his daughter that her relationship with Aaron will never work.

All the screen time this uneven entertainment expends demonstrating Amy’s compassion for her father could have been more profitably devoted to the glorious sight of Schumer stumbling around in the kind of unwearable high heels my sex insists on wearing. Or the joy of watching her dance in a show-capping number that reminds us how light on her feet she really is. 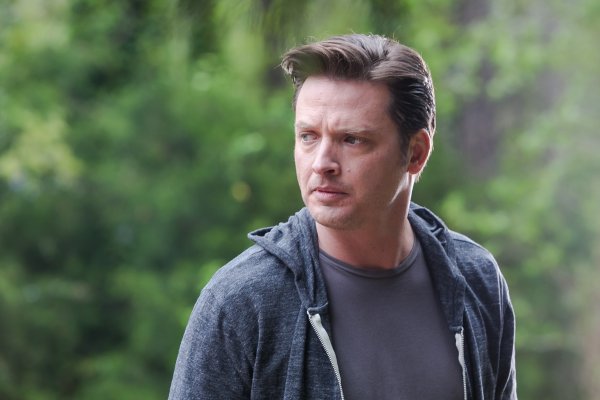 Review: Rectify Tells a Freed Convict’s Tale With Conviction
Next Up: Editor's Pick