Jules Gill-Peterson, a historian and the author of 'Histories of the Transgender Child,' in 'Pride'
FX
By Judy Berman

Pop culture may be a crucial tool in effecting change, but for oppressed groups and their respective liberation movements, mainstream representation is often a mixed blessing. Well-meaning TV shows and movies can nonetheless make spectacles of Black pain or paint feminists as unhinged. For decades, it was rare to see LGBTQ characters who didn’t conform to broad stereotypes or meet with tragic ends; trans people tended to fare worst of all. Even in the 21st century, as sympathetic depictions from The L Word and Bravo’s Queer Eye for the Straight Guy to The L Word: Generation Q and Netflix’s Queer Eye have coincided with real political progress, pop culture has struggled to expand its narrow view of queer and trans life.

The problem with making art that aims to represent any community of millions is that it means doing justice to that community’s vast diversity. More than anything else I’ve seen on TV, FX’s excellent Pride nails it. The six-episode docuseries, airing in two parts on May 14 and 21, traces the history of LGBTQ civil rights from the 1950s through the 2000s, with an hour devoted to each decade. But instead of entrusting the entire project to the same director, producers from VICE Studios and Killer Films—a venerable independent production company that was pivotal in the New Queer Cinema movement of the ’90s—recruited a different notable queer, trans or nonbinary filmmaker to make each episode. The decision to let those smartly chosen contributors tell stories that resonate with them, in styles that reflect each director’s unique voice, yields a history that is artful, complex and vital without being monolithic.

Conventional wisdom holds that progress toward equality for LGBTQ people in the U.S. has moved in a straight line from the total repression of the postwar period to the nationwide legalization of same-sex marriage in 2015, a trajectory disrupted only by the trauma of the AIDS crisis. Pride complicates that notion. Andrew Ahn (Driveways) takes a revisionist look at a ’60s rebellion entwined with the other liberation movements of the day, that was well underway before Stonewall. A trove of downtown nightlife footage captured by late videographer Nelson Sullivan reveals an ’80s New York that partied as a means of psychic survival. In a poignant first-person episode that covers the ’70s, The Watermelon Woman director Cheryl Dunye filters the fraught relationship between queer and straight feminists through her heroes Audre Lorde and pioneering lesbian filmmaker Barbara Hammer.

Not every unorthodox approach works. The multimedia artist Tom Kalin (Swoon, Savage Grace) largely succeeds in presenting a vision of the ’50s in which it was possible to find love and friendship within a queer community that remained almost entirely underground. But narrative vignettes like the one that has Alia Shawkat, playing Lavender Scare survivor Madeleine Tress, speak directly to viewers about a character’s life might work better in a museum setting. For the final episode, Ro Haber (Braddock, PA) elegantly acknowledges growing resistance to white, gay, cisgender supremacy within LGBTQ politics by profiling activists, from trans lawyer Dean Spade to writer and musician Brontez Purnell, who don’t fit that description. It’s just a bit confusing that later segments blur the aughts with the present. (An episode on the 2010s would’ve been welcome.)

One pitfall of mainstream entertainment about the LGBTQ community is the way nervous creators and studio executives often take pains to make it palatable to straight, relatively conservative audiences—whitewashing casts, erasing trans characters and indulging in friendly stereotypes like the sexy bi woman or the gay best friend. But Pride has no interest in pandering. It takes activism seriously, pushing past the idea that same-sex marriage was its final destination and leaning into radicalism.

Pride isn’t remedial, either. It doesn’t regurgitate old conversations about disco or Will & Grace. And it favors undersung icons like gender-nonconforming author Leslie Feinberg and drag trailblazer Flawless Sabrina over celebrities. The masses embraced ballroom long ago, yet in the ’90s episode, Yance Ford (Strong Island) broadens our grasp of the culture through a generous interview with a participant who is a trans man, actor Marquise Vilson Balenciaga. There’s plenty here for straight viewers to learn, certainly. More important, though, is Pride‘s fidelity to all of the many letters, colors and identities that make up the LGBTQ rainbow. 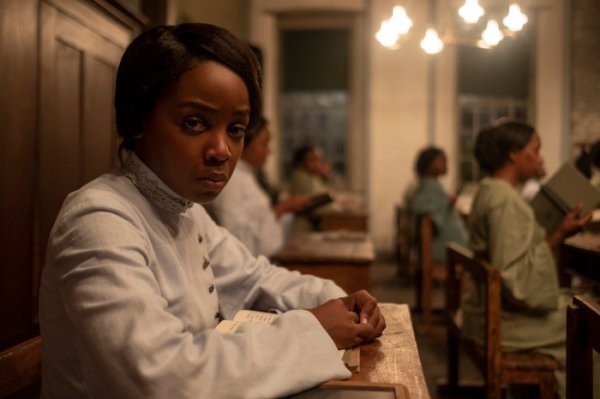 Barry Jenkins' The Underground Railroad Is a Stunning Adaptation and a Brilliant Critique of Black Suffering as Entertainment
Next Up: Editor's Pick