Even People Who Were There Still Don’t Agree on How Stonewall Started. Here’s What We Do Know

By Olvia B. Waxman | Video By Joey Lautrup

A lot has changed for LGBTQ Americans in the 50 years since June 28, 1969, when an uprising in response to a police raid at the Stonewall Inn, a gay bar in Manhattan’s West Village neighborhood, kicked off a new chapter of grassroots activism. The U.S. Supreme Court has struck down state bans on same-sex marriage; the “Don’t Ask, Don’t Tell” policy has come and gone; one of the candidates for the 2020 Democratic presidential nomination is gay.

But one thing that has changed surprisingly little is the narrative about what exactly happened that night. In half a century, we haven’t gained any new major information about how Stonewall started, and even experts and eyewitnesses remain unsure how exactly things turned violent.

“We have, since 1969, been trading the same few tales about the riots from the same few accounts — trading them for so long that they have transmogrified into simplistic myth,” Martin Duberman writes in the new preface for the 2019 re-release of his 1994 book Stonewall, widely considered to be the definitive account of Stonewall and the events that followed.

“In terms of what happened that night, it really depends on who you talk to, and that includes the people who were actually there,” Duberman, now 88, told TIME on a recent visit to his Manhattan apartment. “They often have very different takes on what went down.”

In 1969, police raids at Stonewall were common, says Duberman, who was not there on the night of the raid but was closely involved in the organizing that followed. Officers would throw people against the wall and make sure they were wearing three pieces of clothing that were appropriate to their biological sex, per New York State law at the time. But nobody really knows why the police showed up that specific date, not long after midnight in the wee hours of Saturday morning on June 28; one theory, Duberman says, is that the bar owners failed to pay off the police. “It’s one of those apparent accidents of history,” says Duberman.

It’s also unclear how exactly that particular police raid turned violent, or why that was the night when, rather than being cowed, the patrons responded with resistance.

Some eyewitnesses to whom Duberman has spoken say that “a lesbian actually began the rioting by striking out at a policeman who was mauling her,” he says, but no such woman has ever come forward to say that was her. Some say the incident may have turned violent when a trans person hit a policeman, and some think that one of those people, at least, was Tammy Novak, who fought back when a policeman tried to push her into a police van, according to an account Duberman heard from Sylvia Rivera, a pioneering transgender activist whom the city announced on May 29 will be honored with a monument near the Stonewall Inn.

Part of the reason for the confusion is that there are very few photographs of the uprising in progress, even though the nearby Village Voice extensively covered the five nights of riots that followed. Craig Rodwell, owner of a bookstore that specialized in books about gay and lesbian culture, was taking pictures but they didn’t come out. The news photos that often accompany stories about Stonewall may not even come from the day of the uprising.

Despite the lack of clarity on how the Stonewall riots started, there is a deeper answer to why the uprising happened — and that side of the story is quite clear.

At the time of Stonewall, in 1969, many different counter-cultural movements were underway already.

“I think you need to know the whole context of the 1960s, and just how much rebellion was going on throughout the culture,” says Duberman. “The birth of the feminist movement, the black struggle for Civil Rights, Martin Luther King, Jr.’s assassination — it was an extremely volatile decade. We began to think, well, black people have been long defined as inferior. But now they’re saying black is beautiful. We, gay people, have long been defined as inferior. Maybe it’s time we started to say, ‘Gay is beautiful.'”

Within weeks after Stonewall, LGBTQ people who had been active in other movements, or in the typically quieter forms of LGBTQ activism that predated Stonewall by decades, came together to start “a whole new gay movement” in the U.S., as Duberman puts it. This was a grassroots political protest movement that could organize more openly than its predecessors. This phase of the story Duberman knows personally: after spending years attempting to change his sexuality, he “turned on instantly to the new message” and joined the Gay Liberation Front. Duberman was one of the founders of the Gay Academic Union, the National LGBTQ Taskforce and the first advisory board of Lambda Legal Defense, and is considered a Founding Father of LGBT Studies.

Today, he worries that younger LGBTQ Americans may not appreciate the more under-the-radar pre-Stonewall approach, without understanding what things were like at a time when people could lose their jobs, their apartments and friends merely for being suspected of being gay. He’s also disappointed with what he sees as LGBTQ activists’ overly narrow focus on issues like monogamous marriage, which he considers a straight ideal, and not enough acceptance of different forms of relationships — or attention to other problems in society like criminal justice reform, immigration policies or income inequality, which he sees as issues that ought to broadly concern the American left.

That extensive activism is particularly key given the conclusions he’s reached about this moment in history: that we may never know who threw the “first brick” but we can say for sure that the climate of the time made it possible.

“Having written the book about Stonewall, I’ve talked to a lot of people who were there that night, and basically I think what you have to conclude is that it was that night strictly by accident,” he says. “It was in the air. That is, rebellion, anti-authoritarianism — all that was in the air.” 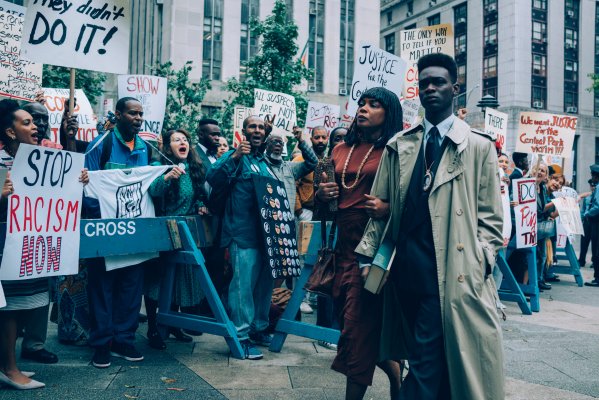 President Trump Played a Key Role in the Central Park Five Case. Here’s the Real History Behind 'When They See Us'
Next Up: Editor's Pick