The Ballroom Scene Has Long Offered Radical Freedoms For Black and Brown Queer People. Today, That Matters More Than Ever

Octavia St. Laurent attends a Drag Ball in New York in 1988.
Catherine McGann—Getty Images
Ideas
By Benji Hart and Michael Roberson
Hart is an educator, artist, and abolitionist living and working in Chicago.
Roberson is a member of the Haus of Maison-Margiela, the art collective Ultra-red, and Senior Scholar in Residence at the Center for Race, Religion and Economic Democracy.

Marginalized by prejudice, violence, housing insecurity, and HIV infection rates among other burdens, Black and brown transgender and gender-nonconforming people face particular challenges in establishing secure, nourishing communities—both within LGBTQ spaces and in society at large. One response to these stigmas has been the formation of self-sustaining social networks and cultural groups, such as the ballroom scene, a formidable social movement and creative collective for LGBT people of color.

Amid what has been called a new golden age for Black culture and storytelling, a particular “Renaissance” in queer Black art and cultural representation is clear. Ballroom culture is now widely seen and celebrated (and appropriated) in the mainstream—across fashion campaigns, music videos, social media and in TV shows like Pose, Legendary, and RuPaul’s Drag Race. And in this moment, ballroom and voguing as the body politic has much to teach the world about what it means to be human, and to struggle for freedom, in the face of catastrophe.

Ballroom emerged amid the Harlem Renaissance, and in response to a decades-long campaign undertaken by the Black church to rid the New York neighborhood of its LGBTQ residents. In the quest for Black freedom, these community leaders decided queer folk did not deserve representation. But rather than be cast out, the ballroom scene centered its’ participants radical presence in an empowered performance space.

From their inception, balls have incorporated fashion, pageantry and dance alongside community-building and self-care. The scene also fostered a kinship system of “houses”—chosen families with anointed ‘mothers’ and ‘fathers’ who guide and support their ‘children’—and uplifted a collective rejection of both white supremacy and Black homophobia. Alongside the Black Freedom Movement, ballroom soon spread across the U.S., continuing to confront systems of oppressions and demanding more freedoms. (It also notably returned to Harlem in the late 1960s led by the legendary trans drag queen Crystal LaBeija, who began hosting balls specifically for Black people as a response to racism in then-New York’s larger downtown drag scene.)

Through oral histories and the work of ballroom scholars, voguers trace their dance form’s origins to pageants organized by incarcerated trans and queer people at New York City’s Rikers Island prison in the late 1970s. Now one of the ballroom scene’s signature “categories,” the original voguers created the dance as a source of entertainment, but also as a means of envisioning freedom while in a state of bondage. It was a tool both for claiming queer space behind prison walls, but also generating a vision of a world beyond the walls of gender, of national borders, of state violence.

Read more: Why Black Trans Women Are Essential to Our Future

In June 2019, on the 50th anniversary of the Stonewall Riots that sparked the Gay Liberation movement, Layleen Cubilette-Polanco, an Afro-Dominican trans woman and member of the legendary Ballroom House of Xtravaganza, was left to die at the same prison, after having an epileptic episode while in solitary confinement. At the Black Trans Lives Matter rally in New York on June 18, 2020, voguers danced as a means of grieving Layleen, Tony McDade, and other lives lost. They danced, using their bodies like generations of queer people before them, to assert their right to exist free from harm, and to imagine a world where that constant assertion is no longer necessary.

This Black History Month, we cannot celebrate voguing without celebrating the ingenuity of Black trans women, sex workers, and incarcerated people. We cannot honor the ballroom houses without acknowledging the parallel pandemics of HIV and COVID that have forced generations of queer people to forge their own networks of safety and support in the face of disinvested communities and indifferent governments. And we cannot fully understand the form, fully participate in its power and beauty, without committing to carrying on the struggles of those who’ve passed it on to us.

The same communities that created vogue are the ones heralding calls to defund police and abolish ICE. The same activists responsible for overturning New York’s walking while trans law are also demanding the decriminalization of sex work. The same organizers who mourned Layleen are also fighting in her name to end solitary confinement permanently, to halt the construction of new prisons, and reallocate funds toward housing, healthcare, public education, and the other resources that actually protect Black trans lives. Vogue is a part of all these struggles, for it allows its dancers to dream and enact these seemingly impossible demands, to generate freedom in real time.

An estimated 15,000 supporters of Black Trans Lives marched in a rally from the Brooklyn Museum to Fort Greene Park in Brooklyn, N.Y. demanding justice for murdered members of their community on June 14, 2020.
Scout Tufankjian—Polaris

Black prophetic tradition not only sees a way forward, but offers this necessary critique of the present moment. And this is the gift of ballroom, at its core. Ballroom has been courageous in daring to ask the question: in this moment of Black Lives Matter, which Black lives matter most? And which do not matter at all? But it also offers hope, because it’s a reflective mirror of what democracy can really look like: radical inclusivity, relevant now perhaps more than ever as we witness white nationalists’ mobbing the U.S. Capitol, as we confront a country’s racial reckoning, as we struggle in the midst of a global pandemic. As with ballroom’s birth within the Harlem Renaissance, itself a cultural reset following the Spanish flu of 1918, we can and should consider its rebirth after COVID-19.

If the moment we are inhabiting is one our Black trans and queer ancestors once imagined, vogue and ballroom are a potent means through which we continue their work ushering in new worlds. It is an insurgent act of joy that reminds us that futures other than the ones we’ve been prescribed are possible, and we already possess the tools to make them real. 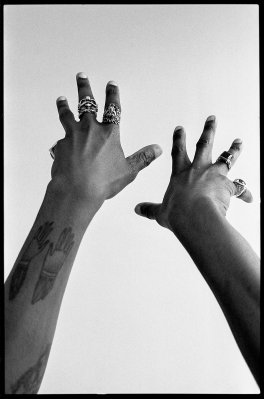