The L Word: Generation Q Is a Valiant Effort. But the Show Is a Time Capsule That Should Have Stayed Buried

To understand the extent to which mainstream media depictions of the LGBTQ community have evolved over the past 15 years, you need only compare Showtime’s The L Word with early episodes of its upcoming sequel, The L Word: Generation Q. When it premiered in 2004, the show broke ground by virtue of its premise alone: queer women in Los Angeles live and love in high soap opera fashion. The cast was uniformly thin, long-haired, feminine and conventionally attractive. Aside from Jennifer Beals as Bette Porter and Pam Grier at the fringes of the plot as Bette’s straight half-sister Kit, it was also all white. Early storylines found Bette and her partner Tina navigating artificial insemination, a tennis star coming out of the closet and a wide-eyed L.A. newcomer cheating on her live-in boyfriend with a sophisticated female cafe owner.

It all seems very Lesbian 101—not to mention very tailored to the heterosexual male gaze—in contrast to what goes down within the first few minutes of Generation Q, which premieres Dec. 8. While the show does begin with one of those gratuitously long sex scenes for which The L Word was famous, this time the couple between the sheets is Latinx millennials Dani (Arienne Mandi) and Sophie (Rosanny Zayas). And it turns out Sophie is on her period. Their mononymous butch pal Finley (Jacqueline Toboni) bikes across town in a sports bra, baring hairy armpits and screaming “Time’s Up, jackass!” at a catcaller. We meet Dani and Sophie’s roommate Micah (Leo Sheng), a sweet academic who happens to be a trans man.

By some unbelievable but easy-to-overlook coincidence, most of these new faces quickly find themselves in the orbit of The L Word’s three returning Gen X characters. Once an art-world enfant terrible, Bette—who’s now divorced from Tina and raising their loving but rebellious teenage daughter, Angie (Jordan Hull)—is channeling her ambitions into a run for mayor, despite the many skeletons the original show stacked up in her closet. Alice (Leisha Hailey), who was introduced as a bubbly bisexual journalist, is juggling her own talk show and a fiancée (Stephanie Allynne’s Nat) who has two young kids plus a creepily clingy ex-wife (Sepideh Moafi). The emotionally unavailable James Dean of the circle, Shane (Katherine Moennig) has just returned to LA and moved into a palatial home financed by her salon empire but can’t stop thinking about her estranged wife.

New showrunner Marja-Lewis Ryan (The Four-Faced Liar) struggles to balance such a big cast; Micah and Sophie don’t quite come into focus in the three episodes sent for review. What’s more worrisome in the long run is that, despite their proximity, these two cohorts can feel like they’re in parallel shows. With their glamorous jobs and rich-people problems, Bette, Alice and Shane are living the same sparkly postfeminist fantasies that hooked viewers in the aughts. That leaves the more diverse “Generation Q” characters to represent the politically engaged, sexually fluid and trans-inclusive present. While Shane buys a bar on a whim and Alice flirts with talk-show guest Megan Rapinoe, Dani and Sophie wrestle with the class differences that divide them and freeloading goofball Finley (an early contender for the Jenny Schecter Award for Most Irritating Character) is forced to confront her Catholic upbringing. The result is a more serious drama shoehorned into an aspirational soap.

Ryan doesn’t deserve all the blame for this disconnect. She inherited a show that had been widely criticized during its initial run for its homogeneous depiction of queer womanhood, that had gone irreparably off the rails in later seasons and that has aged terribly since it went off the air. And in the sense that the characters she’s added bear a closer resemblance to the real queer community you might find in a major American city in 2019, she has succeeded. When you recall, for example, how clumsily The L Word creator Ilene Chaiken depicted recurring characters with non-normative gender identities—Alice dated a self-identified “male lesbian” who went by Lisa, while Kit spent time with a drag king who started living as a man in order to court a straight woman—the fact that Ryan’s update isn’t casually offensive seems worthy of praise.

The truth is that a new L Word was always doomed to fail as a creative project, regardless of how it performs in the ratings, because it isn’t just the original series’ cast of characters that’s outdated—it’s the entire premise. In 2019, the assumption that it’s possible to capture what it means to be a queer woman or a trans man in a mere handful of characters seems absurd. While there has never been such a thing as a monolithic lesbian or bisexual or trans experience, relatively positive depictions of these characters were so scarce until recently that communities starved for mainstream representation 15 years ago had to take (if also complain about) what they could get.

But in the past several years, as a spike in support for LGBTQ rights has coincided with an explosion in scripted television, queer women of all identities and personalities have started anchoring shows which are not, unlike The L Word, solely about their identities as queer women. These shows are as different as Orange Is the New Black, Vida, Batwoman, One Mississippi, The Fosters, Gentleman Jack and now Showtime’s own Work in Progress, a dark comedy about a self-identified fat, 45-year-old “queer dyke” with suicidal ideation that will air alongside The L Word. The Bisexual, from creator-star Desiree Akhavan, does something it would be interesting to see Ryan attempt in earnest, meditating on the gaps in experience that separate queer-identified college-aged, millennial and 40-something women. Trans characters have come to the fore in Pose, Euphoria, Chilling Adventures of Sabrina and the ill-fated Transparent. From Billions to One Day at a Time, non-binary people can finally see themselves on TV.

This shift isn’t just about a handful of highly visible cable and streaming shows, either. GLAAD reported in November that LGBTQ representation had hit a record high, with 10.2% of broadcast primetime characters identifying as something other than straight and cisgender. Within this subset, racial diversity is also on the rise. Most surprisingly, in a landscape where gay men have historically stood in for the larger community, for the first time a majority of LGBTQ characters were women.

It was strange, then, to see Chaiken lamenting the lack of successors to her show in a recent interview. “I expected that when The L Word went off the air, that the torch would be passed,” she told The New York Times. “I was surprised and dismayed not to see it happen.” Maybe it’s telling that she doesn’t detect the show’s influence in series that, for the most part, center women with more melanin or less cash. A more charitable interpretation, and one I could get on board with, would be that the original L Word remains unique because, as a product of an era when depictions of identity weren’t so closely scrutinized, it had the luxury of being unapologetically sudsy. That was what made it so simultaneously addictive and offensive—an extremely flawed but very fun-to-watch relic of a transitional moment. There’s no harm in escaping into its outdated lesbian idyll for an hour at a time. But, as Generation Q demonstrates, you can’t go home to a place that no longer exists. 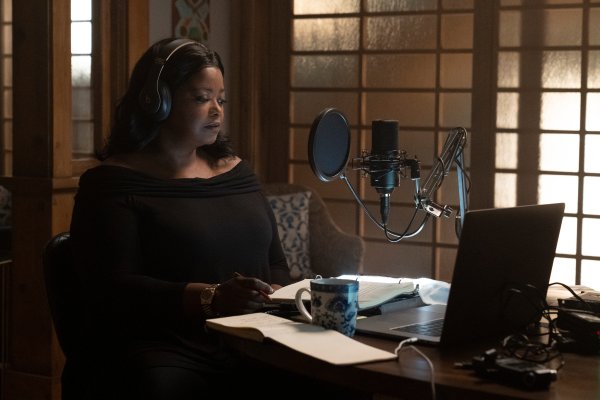 True Crime Drama Truth Be Told Isn't a Disaster—But It's Everything That's Wrong With Apple TV+
Next Up: Editor's Pick