Pixar's Soul Ponders Big Metaphysical Questions, But It’s Best When It Comes Down to Earth

Joe Gardner, voiced by Jamie Foxx, learns important lessons in the Great Before in Pixar's 'Soul'
Disney/Pixar
By Stephanie Zacharek

Pixar films are the most philosophical of the animation world, and the fact that they deal overtly with existential problems or anxieties might sometimes trick us into believing they’re better or deeper than they actually are. In Pixar’s latest, Soul, a jazz musician, voiced by Jamie Foxx, suffers a near-death experience just as he gets his big break. The movie is wonderful when it’s dealing with the small pleasures and big disappointments of living on Earth, specifically, New York City, which it renders in a feat of fantastically semi-realistic beauty. But overall, the movie is so ambitious—so intent on reminding us, every minute, that it really is a work of Big Ideas—that it ends up subverting its own charms. The Pixar masterminds often seem to think complicated is better, or at least just deeper. But to paraphrase Thelonious Monk, they’ve been making the wrong mistakes.

That’s a drag, because Soul could have been a work of great joy if it weren’t pedaling so hard to answer unanswerable questions about what happens to us when we die, and what shapes our personalities in the first place. Foxx’s character, Joe Gardner, is a music teacher in a New York City school, a lanky, well-mannered fellow with 1950s hipster horn-rimmed glasses and an Errol Garner mustache. His teaching job has just become permanent, which should make him happy. But teaching is a grind. He longs to be a professional jazz musician, and he gets his chance when a former student calls him up with a proposition: legendary bandleader Dorothea Williams (Angela Bassett), a sultry saxophone player and a formidable presence, needs a pianist, fast. Joe impresses her and gets the gig. He’s so overjoyed as he heads home that he suffers an accident (a moment that’s underplayed, so as not to freak out the tiny tot viewership). Next thing he knows, he’s no longer flesh and blood, but a pastel blob of ectoplasm—or something—moving along on a conveyor belt toward a bright light known as the afterlife. (This visual detail is a clear nod to Michael Powell and Emeric Pressburger’s glorious romantic fantasy A Matter of Life and Death.)

Joe doesn’t want to go into that light, not when his big life dream is about to come true. In his blob form, he runs as fast as he can in the opposite direction, eventually bouncing into another unfamiliar landscape, one of rolling, opalescent hills and lavender skies. This is the Great Before, where souls undergo training before they’re allowed to fly to Earth and inhabit human bodies. This world is overseen by abstract curlicue overlords who look as though they’ve just stepped out of a Kandinsky painting, all going by the name Jerry. (There are three of them, voiced by Alice Braga, Richard Ayoade and Wes Studi.) The Jerries give blob-Joe a job: he is to help a hapless soul known as 22 (Tina Fey) complete the rigorous steps that will allow her to enter a human body, which involves finding her “spark.” The problem is that 22 has been hanging around the Great Before for so long that she can’t imagine anything else. She has no desire to wrangle the unknowability of Earth life.

22, voiced by Tina Fey, teaching newcomer Joe that pizza's just not the same when you lack a corporeal form
Disney/Pixar

It turns out that the unknowability of Earth life is one of its greatest pleasures. And if Soul had made that its chief revelation—as opposed to spending so much time positing fanciful theories about life before and after death—it would be a much better movie. But Soul is too fixated on the Great Before, a land of complicated rules that are explained in sometimes contradictory ways. The “spark” is initially understood by Joe to be a person’s true passion, like his own love for music; later, it’s suggested that it’s really just some highly specific form of joie de vivre—but would it really be so bad if Joe had been right in the first place? In its attempt to provide clever answers to unknowable questions, Soul just makes everything more confusing.

Joe does find his way back to Earth, with 22 in tow, and their Earth adventures are far more engaging than their escapades in the Great Before. That’s largely because the design of the movie’s human characters is so warm and finely detailed, as opposed to the abstracted blobs and squiggles of the Great Before. Soul—which was directed by Pixar veteran Pete Docter and playwright Kemp Powers (One Night in Miami)—works when it speaks in the language of earthbound specifics, focusing on things like the austere beauty of a helicopter seed floating down from a tree, the way the first bite of a slice of pizza tastes, or the glory of improvising at the piano. Joe, in human form, is a beautifully conceived and drawn character. Joe’s soul-blob version isn’t nearly as compelling, even though he wears similar glasses and a tiny translucent version of human Joe’s stingy-brim fedora.

But the movie needs soul-blob Joe to spin out its metaphysical ideas, which only end up overcomplicating the story. Soul represents a move by Pixar to focus on characters who aren’t almost exclusively white. (The studio took an earlier step in that direction with the 2017 Coco, which featured an all-Latino cast.) And every scene that takes place in the story’s vividly imagined New York—a wonderland of bodegas and dry-cleaning joints, of cracked sidewalks and bustling construction sites, of dignified brownstones on streets dotted with trees—feels alive and joyous. In contrast, the whatever-it-is that comes before life isn’t all that interesting. No wonder 22 quickly takes a shine to Earth life—to New York, specifically—and yearns to stay. She, too, finds the metaphysical questions uninteresting. She’d trade them all for a New York slice—and get the better deal. 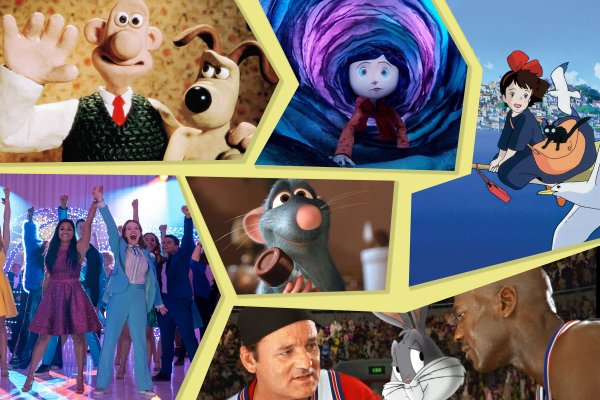 The 50 Best Family Movies to Stream
Next Up: Editor's Pick