A COVID-19 patient is prepared for intubation by the anesthesiologist at Holy Name Medical Center in Teaneck, N.J., on March 31. The plastic tent is so the virus isn’t spread while transporting the patient between units.
Danny Kim for TIME
By TIME Photo Department

In news events chronicled by TIME photographers across the year, the invisible forces pushing us apart become visible: The plastic barriers built and the Tyvek worn to separate a pathogen from a human being. The truculence on the face of President Trump in the wee hours after Election Day, and the Tiki torch and pitchfork in the hands of a man who showed up at an Arizona election office the next day wearing a MAGA hat and a pistol. On a Brooklyn street corner, protesters pull a young man one way as police struggle to drag him the other.

It’s entirely too easy to forget that 2020 began amid at least the trappings of normality, with Democratic presidential candidates barnstorming snowy Iowa and New Hampshire. By autumn, photos of Elizabeth Warren raising a beer in Cedar Rapids and Bernie Sanders raising a fist in Manchester had assumed the quality of a daguerreotype, forgotten images arrived from a previous era.

Our own time existed in a state of suspension. Peter van Agtmael captured something close to its essence on an April day in Ocean City, Md., in a photograph that could serve as a portrait of 2020: A parking lot empty of cars, facing a flat sea, beneath a vaguely ominous sky that might be cloudless or might be overcast. From here it’s hard to know. —Karl Vick

Correction, Jan. 4
A caption in the original version of this story misstated the date of a photograph showing a smashed MAGA hat sculpture. It was taken on Nov. 3, not Nov. 4. 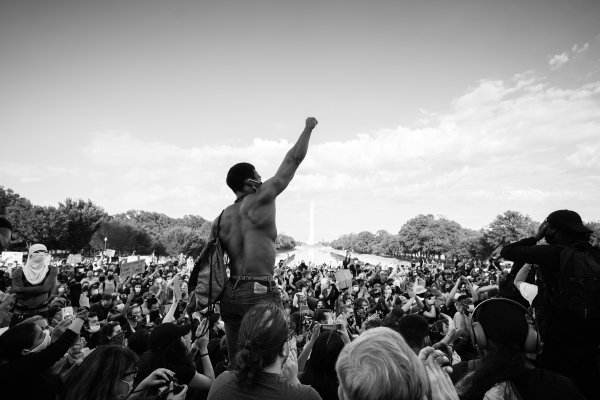