A man runs through the fountain in Washington Square Park in New York City on Nov. 7, after Joe Biden was declared the winner of the 2020 U.S. presidential election.
Malike Sidibe for TIME
By TIME Photo Department

It felt like the country held its breath over four long days, anxiously awaiting one of the presidential candidates’ electoral votes to reach 270. On the morning of Nov. 7, after the Associated Press finally called Pennsylvania for former Vice President Joe Biden, pushing his total vote count to 284, a divided America poured onto the streets.

Since Election Day, TIME’s photographers have been spread out across the country to capture it all. With limited access to the candidates at events due to pandemic-related precautions, they sought out creative ways to tell the story. In the end, it somehow feels closer to what we all experienced watching the election unfold on our screens — like Tony Luong’s photos of his dinner sitting before the TV in his hotel room. They saw the anxious faces over the long counting of absentee ballots in an election that saw the highest voter turnout in history.

On Saturday afternoon, jubilant celebrations sprang up in New York, Washington, D.C., Minneapolis and California and went on into the night. That evening, crowds gathered around at the Chase Center in Wilmington, Del., to cheer and see President-Elect Joe Biden and Vice President-Elect Kamala Harris address the nation after their victory for the first time.

At the same time, since Election Day, President Donald Trump’s lawyers have been contesting the totals in many states in a series of lawsuits that have gained little traction so far. In states like Florida and Arizona, our image-makers documented protests making convoluted arguments over the tabulation process.

Here are their images and first-hand accounts of this historic moment in America.

As an African immigrant who just became a U.S. citizen—and as a first-time voter—the announcement of the results on Nov. 7 did not just mark a moment to celebrate, but it signaled the beginning of a time of recovery.

The last four years have been nothing but a series of television dramas. The President has brought nothing but a nightmare to the people who work very hard to build this country up, to make it what it is today. In New York — his hometown — it felt good walking down the street and exchanging a smile with New Yorkers again. I just hope that this feeling will last. —Malike Sidibe

“These are fragments I remember from the long week: The President’s usually defined and controlled expressions dropping for a brief moment into melancholy and unease.

The nearly empty Black Lives Matter Plaza on election night at 4AM, a woman dressed as a clown dancing flamboyantly and taping anti-Trump signs to the asphalt.

The boarded up store-fronts and empty streets in a normally bustling neighborhood near the White House.

A young White House staffer in a small alley at night outside the West Wing, her face catching the light for a split second revealing a tear streaked-face before turning quickly back into the shadow.

The swell of a cheer from a small crowd, followed by a few car honks, then more honking then cheers from every direction, as Joe Biden was announced as President-elect.

I’ve never seen such joy and relief in such numbers in an American city in my life. It also made me think of all the people disconsolate that their beloved president had lost the race.” —Peter van Agtmael

“I must admit that I don’t know much about the United States. This trip I have chosen to do right now, during one of the most polarizing moments in its history, is precisely to get to know this country better.

One of the things that surprised me was having these big rallies inside airports or in what look like shopping mall parking lots. I tried to return to these places at the end of the great events trying to make sense of it but without finding it.

In Italy or France, such a rally would probably take place in symbolic places like the Piazza del Popolo rather than in sterile places decorated for the occasion.

I found the election system particularly complicated, and am heartened by the fact that the current President is also finding it difficult to understand who won.

Although I am particularly happy to see my American friends and colleagues rejoice in Biden’s victory, as a photographer who has worked for many years in the Middle East, I hope that the United States, democratic or republican, will be more careful with their foreign policies.” —Lorenzo Meloni

“I had been sitting in a park in Philadelphia with a friend on Saturday morning, and all of a sudden, people around us started screaming, car horns honking, collective cheering, and a literal church bell ringing. It was a domino effect of people realizing Pennsylvania had been called for Biden.

There had been a cloud of anxiety and tension that was palpable in the city since Tuesday, but once it was announced, it was as if a dam had broken. I remember a band in Rittenhouse Square had been playing, and when the news came out, they started to play “When the Saints Go Marching In.” People were running out of their houses towards Broad Street and City Hall, dancing to someone’s stereo playing “Party in the USA.” The one word I heard the most in Philadelphia and later in Wilmington was “relief.”

In Wilmington, when the fireworks went off at the end of Biden’s speech, looking around at so many varieties of people in race, gender, and age, all chanting “USA! USA! USA!” together. You could feel this electric unity running through everyone in that crowd.” —Michelle Gustafson

“Pretty much everyone I’ve spoken to in LA spent the days after the election in a weird state of limbo, where they were unable to get any work done, or read a book, or concentrate on TV, or even sleep. Election Day simultaneously feels like it was yesterday, and also three months ago. It was difficult for me to put together the captions for these photos just now because everything that’s happened since the election has just sort of melted together into one long anxiety dream.” —Jamie Lee Curtis Taete

“It is here, in the center of a Trump supporters’ rally, that I found myself coming home, with Ruddy Roye in tow, only to be cast out by my community. The crowd last night outside La Carreta on Bird Road first turned on a cameraman for Telemundo before shifting focus toward running us out of the lot. They asked why we’d come here, and Ruddy answered: ‘Because I have always been interested in the eyes of the other.’

Four years ago, it was the eyes of the Democrats we looked into in order to understand how a nation carries on beyond the fervor of a national election. The lessons are in that disappointment. And these eyes in Florida betrayed the same pain we saw then — disenfranchisement, fear for moral values, work, culture and more. The community is raw, visceral and animalistic in its anger.

It’s important to come to know that insidious mistrust that would provoke someone to put hands on people they don’t know, who are just trying to do their jobs. To call through megaphones for the destruction of the ‘communists’ they claimed we were. To call for the truth and transparency Cuba’s dictatorship refused, only to then hunt down anyone there to hear it, using the Cuban flag as the banner under which to drive them out. As a community and as a culture, we have to ask ourselves what we fled for.” —Reported by Rebecca Lee Sanchez

A supporter of President Trump poses for a photograph in Miami on Nov. 7.
Ruddy Roye for TIME
Members of The New Black Panther Party make an appearance at George Floyd Square in South Minneapolis on Nov. 7.
Patience Zalanga for TIME
Trump supporters protest the outcome of the election in front of the Minnesota Governor's mansion in St. Paul, Minn., on Nov. 7.
Patience Zalanga for TIME
Women pray in the parking lot outside of the Maricopa County Elections Office in Phoenix, Ariz., on Nov. 6.
Sinna Nasseri for TIME

“Here in Phoenix, Trump supporters have been very vocal since the election, with protests each day and into the late evening. It’s a fascinating melange of the Trump faithful: evangelicals, internet provocateurs, heavily armed militia members and white nationalists. They don’t trust the election results and conspiracy theories fly around like MAGA flags in the wind.

The hard core supporters here don’t seem like they’re going anywhere. They’re distrustful of the legitimacy of the process, and I don’t see them accepting the results.” —Sinna Nasseri

I saw and felt an overall sense of calm in Wilmington on Election Day, consisting of equal parts of nervousness and confidence. From 7AM to 7PM, I drove all around Wilmington through various neighborhoods, both urban and suburban. Folks were commuting to their jobs, kids playing in their yards, construction workers resuming their projects, and lastly, voters waiting to vote. I saw Biden/Harris signs every few houses or so.I didn’t see any agitators at any polling locations or major gathering areas, nor did I see any rallies or conflicts between Trump and Biden supporters. Still, the one thing I did feel was this sense of anticipation that couldn’t be outwardly expressed within the wait for the results to come in.

One moment that stood out to me was in the evening at the Chase Center, where President-elect Biden held his event. As everyone waited for the first states to begin calling their vote counts, a few Biden supporters began to trickle in hopes of seeing the President-elect speak or even being let in. That was impossible due to the coronavirus and restrictions. I walked along the barricade and noticed this mother and her daughter quietly staring at the massive American flag that hung from the cranes inside the event area. There was something hopeful and incredibly quiet about that, being on one side of the fence gazing at a symbol of freedom and hope. It seemed to sum up the voices of everyone in the country and where it was headed and how we were going to move forward regardless of the outcome. — Tony Luong

Correction, Jan. 4
A caption in the original version of this story misstated the date of a photograph showing a smashed MAGA hat sculpture. It was taken on Nov. 3, not Nov. 4. 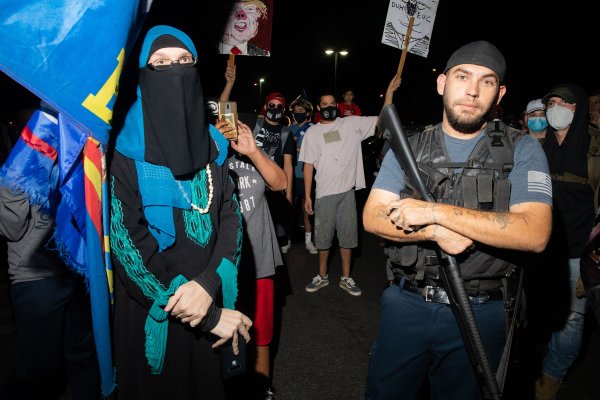 Scenes from Election Protests in Arizona
Next Up: Editor's Pick