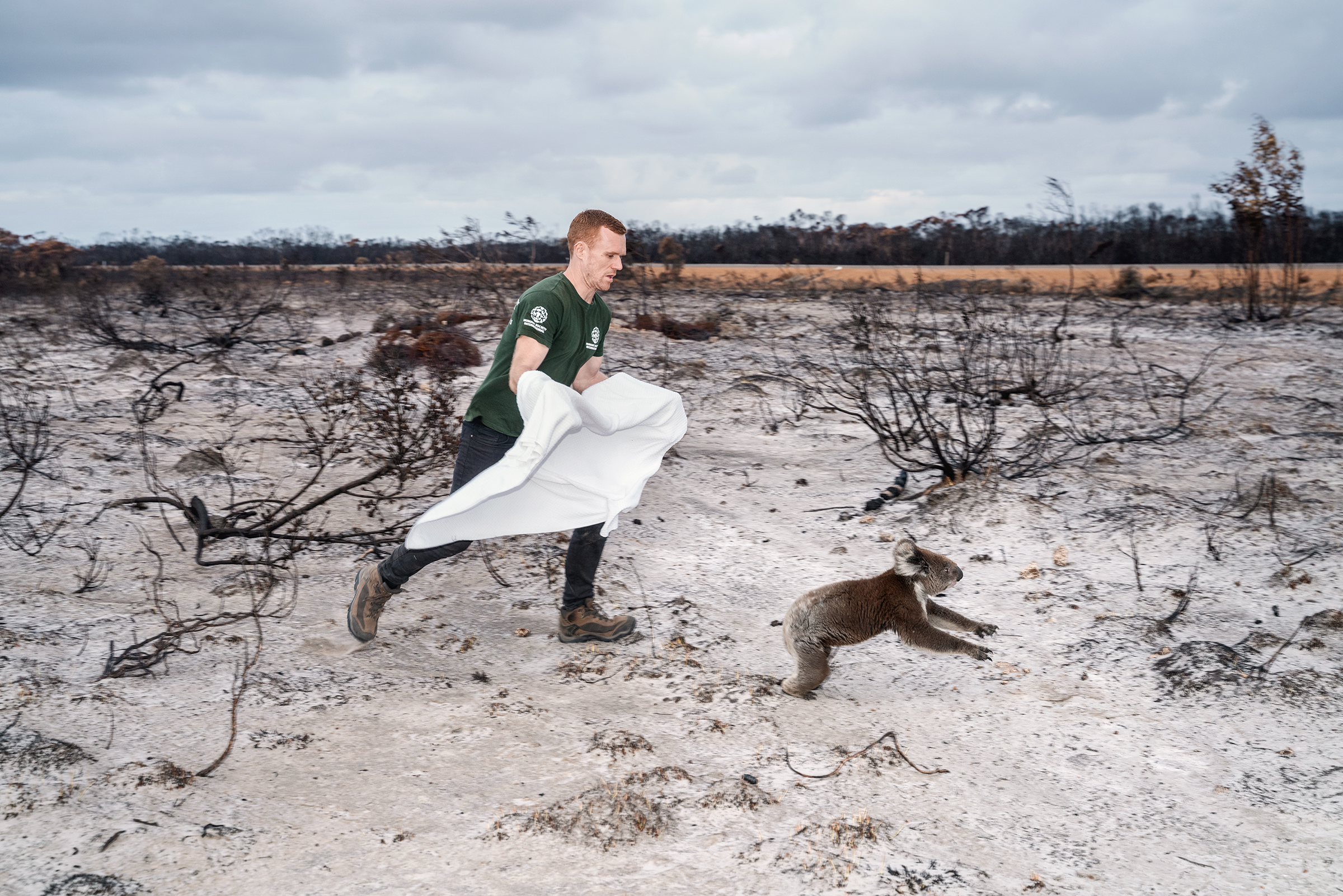 A koala is rescued on Jan. 16 from Kangaroo Island, an area devastated by Australia's bushfires.
Adam Ferguson for TIME

Most Australians Don't Spend a Lot of Time Thinking About the Bush. The Wildfires Remind Us What We Could Lose

By Belinda Luscombe | Photographs by Adam Ferguson for TIME

“Smell that?” My husband gave me a look as we waited by Sydney Airport’s luggage carousel. It was smoke, not unpleasant, like a distant neighbor’s wood fire, but persistent and odd in a place that’s usually redolent of coffee, duty-free perfume and burning jet fuel. He had insisted we stock up on face masks before we left the U.S., over my objections that he was overreacting, and now raised his eyebrows knowingly.

Having grown up pretty much next to the Australian bush, I had watched the news of infernos in my homeland with skepticism. Bushfires were to my childhood like blizzards were to my adult life in America’s Northeast: an inevitable feature of the landscape for which you had to be prepared. As young journalists, we used to joke each summer about who would be the first to write the phrase the whole state is a tinderbox.

Orange smoke fills the sky near a property north of Moruya, New South Wales, on Jan. 4.
Adam Ferguson for TIME

My family home had endured two close calls. During the scarier of these, my dad’s shirt briefly caught fire as he tried to save the chickens. Both the poultry and the parent survived. Foxes — or something — took the chickens in later years. My father’s life was now being threatened by less exotic hazards with fancier names: pericarditis and an evolving occipital infarction — a bad heart and a stroke. Hence the trip.

As I watched the national evening news, alerts flashed across the screen that people who lived on specific streets in Western Australia needed “to act immediately to survive,” and others were instructed it was “too late to leave; seek shelter.” But these dramatic bulletins got less attention than the gasping tennis players at the Australian Open. This is true to form; Australians spend a lot of time not thinking about their bushland. We all assume it will continue to behave as it ever has, cleaning the air and surviving on what little water humans aren’t using. But Australia, particularly in the east where the worst fires are, has just endured the driest three-year period on record, part of a pattern of changes in its already extreme climate.

I got many anxious inquiries about my family from kind American friends, but while the fires were devastating and deadly in a way even Australians are unused to — at least 29 people have died in a three-month period — very few of my relatives were under immediate threat. More than eight times as much land has burned in Australia as in the California fires in 2018, but Australia has lost fewer than one-seventh as many homes. The long, less telegenic drought has been far more ruinous to farms and livelihoods.

It’s hard to explain to citizens of more populous countries how vast and empty and inhospitable is the bush, as Australians universally refer to the national parks and scrubby wilderness that make up most of their country. Locals will defend to the death its beauty, but in the same way people defend a difficult uncle. They love him; they don’t actually want to hang with him.

As a child I rarely explored the 8 sq. mi. of national park just behind my house, because the chances of seeing a cute marsupial or pretty flower were tiny and the chances of getting bitten or stung or scratched by ornery insects or vicious plants were almost 100%. (A recent British guest of my parents was foolish enough to break a twig off a plant and became temporarily blinded by poisonous sap that squirted into his eye.)

Sarah Rugendyke, 7, sits on a play castle that was burned on her family’s property in Cobargo on Jan. 20; an out-of-control bushfire devastated the tourist town about 240 miles south of Sydney on New Year’s Eve.
Adam Ferguson for TIME

The Australian wilderness is just not very come-hither. It never changes. The leaves never redden or fall. The trees grow very slowly. There’s no sudden riot of bluebells or daffodils. The view from my parents’ house is essentially the same as it has been for 30 years, month in and out: constant gray-green foliage and tree trunks one local poet described as the color of dried blood. When I started hiking in the northern hemisphere, it all felt so cushy and easy, like an upgrade to business class.

For Australia’s first known human inhabitants, the bush was just as difficult and omnipresent, but it was — and still is — sacred. Hills, rocks, waterfalls, plants, even animals, are believed to hold the spirits of ancestral beings. The land is holy ground; humans are only there to preserve it. For non-indigenous Australians, 40% of whom shelter in its two biggest cities, the bush is just there; it fades into the background much as the smell of smoke stopped being noticeable a few hours after we arrived and we had to check an air-quality app to ascertain whether the skies were gray from smoke or rain clouds. (I still haven’t used a face mask.)

Fire is the only event that offers any change to the bush at all. In fact, my favorite time to explore when I was growing up was after it had burned and the tree trunks were black and threw everything else into sharp relief. Once cleared of the thick, low-lying scrub, striated sandstone ledges and caves became visible. You could make out how trees were literally growing out of rocks.

Several months ago, anticipating a tough bushfire season, firefighters had strategically burned parts of the bush nearest my parents’ home to thin it out, and as I walked through the day after I arrived, I saw four wallabies, more than I had seen in half a life’s worth of walks combined.

Bats fly through a smoke-filled sky above a highway between Ulladulla and Batemans Bay in New South Wales on Jan. 4.
Adam Ferguson for TIME

Just as a parental illness will force offspring to notice frailties they’d overlooked, the fires have suddenly made Australians pay attention to parts of their country they don’t think about often. Normally a reliable carbon absorber, the bush instead has pumped hundreds of millions of tons of carbon -dioxide into the atmosphere, along with enough smoke to briefly make Australian cities the most polluted in the world.

The specter of half-burned koalas drinking from water bottles and kangaroos fleeing the flames has made it very clear that even though the bush looks like a wall of unchanging and impenetrable wilderness, it teems with life. One estimate put the animal loss at a billion creatures, but the truth is, nobody knows. Most of that which is burned Australians didn’t consider inhabited.

Marilyn Mills poses with one of her horses on the property Belgrave Park near Cobargo on Jan. 21. Mills and her husband fled their home after it caught on fire while they were seeking shelter inside. Mills said she thought she was going to die and left a voicemail for a friend: "My name is Marilyn Mills. I am now dying, and I just want to say goodbye to someone." The couple lost their home and four dogs.
Adam Ferguson for TIME

But fires are also one of the ways the Australian bush -regenerates. In November, my cousin’s ex, an eccentric who actually lives in the bush, had to flee with his dog. He lost two sheds and a car, but his home and cat survived. The trees that were scorched on his property have started to sprout little leafy collars as the seeds below the bark that germinate only after being burned spring to life. Every day he sees new signs of life. More locally, the rains have announced that at least part of the gray sky is clouds. The Australian bush will probably rise again from her fever. The question is, can she find a way to keep her neighbors interested in her recovery?