Vermont Senator Bernie Sanders dropped out of the 2020 Democratic presidential race on Wednesday, effectively ending a primary in which he once appeared poised to run away with the party’s nomination.

A self-described democratic socialist, Sanders’ calls for a political revolution resonated with the far-left faction of the Democratic party and young voters who were tired of its establishment candidates and centrist policies. But it isolated rank and file Democrats who overwhelmingly backed the early favorite, former Vice President Joe Biden, as the party’s best chance to defeat President Donald Trump in November. Biden now has a clear path to the nomination, though the end of the primary was overshadowed by the global crisis of the coronavirus pandemic as it spread across the U.S.

“If I believed we had a feasible path to the nomination, I would certainly continue the campaign, but it’s just not there,” Sanders said in a livestream address on Wednesday.

“As I see the crisis gripping the nation, exacerbated by a president unwilling or unable to provide any kind of credible leadership and the work that needs to be done to protect people in this most desperate hour, I cannot in good conscience continue to mount a campaign that cannot win and which would interfere with the important work required of all of us in this difficult hour,” he said.

Sanders called his choice to suspend his campaign, made over the course of several weeks with the guidance of his close advisors and supporters, a “difficult and painful” decision. He characteristically took the opportunity to point to “how absurd” it is to have employer-based health insurance, in particular in the wake of the pandemic.

After a strong early start in Iowa, New Hampshire and Nevada, Sanders was clobbered by Biden on Super Tuesday and nearly every primary contest since, crystallizing that Sanders’ strategy of drawing out new voters was ultimately limited in its success.

Despite his loss, the effect of Sanders’ proposals will likely reverberate throughout the Democratic party for generations to come. After a competitive presidential bid in 2016, Sanders pulled the early, wide field of Democratic candidates in the 2020 race to the left with plans like Medicare for All and offering free college. Some of his signature issues were at the forefront of the conversation among Democrats, and made up a lot of the time on stage during the primary debates.

He has inspired young activists ready to take up the mantle on issues from health care to climate change. Notably among them is the popular U.S. Rep. Alexandria Ocasio-Cortez, Sanders’ most prominent endorser who threw her weight behind him shortly after his heart attack when he was most vulnerable in the race. (Ocasio-Cortez supported Sanders in 2016, long before she was a household name.)

“Part of the reason why Bernie Sanders’ message resonates so much with young people is because we are not caught up in the story of yesterday,” says Varshini Prakash, co-founder of Sunrise Movement, a grassroots organization of young people aimed at combating climate change that endorsed Sanders. “I think [we] see the problems that the status quo way of thinking led to, and are now saying that system doesn’t work, we need something new.”

Sen. Bernie Sanders on night of the Iowa Caucus in Des Moines, Iowa on Feb. 3, 2020.
Devin Yalkin for TIME

Though his campaign long argued he was an electable candidate, voters worried that he was too far left to beat Trump. He promised to draw out a diverse coalition with a message that would excite new voters, and he made gains with Latino voters. But he struggled to connect with black voters and bring out the youth vote in the numbers that he needed. And though Biden is also in his seventies, Sanders, who is 78, suffered a heart attack in October that raised sharp questions about his health and nearly ended his campaign after it happened.

Fundamentally, voters did not appear to be ready for Sanders’ progressive agenda — at least not at the expense of choosing a candidate viewed as better positioned to win the election. Mark Longabaugh, who served as a senior adviser in Sanders’ 2016 race, told TIME that in retrospect, he believed Sanders had benefited from an anti-Clinton vote more than the campaign had realized at the time.

“In ‘16, he burst upon the scene as sort of this new fresh, insurgent face, and people who were looking for an alternative to the establishment did not see him as this radical, you know, socialist,” says Longabaugh. “What’s happened to Bernie, unfortunately for him… is he’s become a more radicalized figure than he was in 2016.”

Bernie Sanders speaks at a campaign event in Manchester, N.H. on Feb. 7, 2020.
Tony Luong for TIME

Born in Brooklyn, Sanders eventually wound up in Burlington, Vermont, where he was elected as mayor in 1981. He served in that position for four terms, and also served in the US House of Representatives for 16 years before being elected to his current position in the Senate in 2006. He is an Independent in Congress, despite running for President as a Democrat.

In the rarified atmosphere of Capitol Hill, he’s known for wearing plain suits from Kohl’s and walking briskly, rarely pausing to rub elbows with his colleagues. “If you have your birthday, I’m not going to call you up to congratulate you so you’ll love me and you’ll write nice things about me,” Sanders famously told the New York Times editorial board.

He rarely talks about himself. And while, at the encouragement of advisers, he worked on incorporating more of his own story in his campaign this cycle, his emphasis that his bid for the presidency was about the voters, not him, was central to how he operated on the campaign trail; “Not me, us,” was his campaign slogan. At its core, his message gave voters permission to be angry at the circumstances that have kept them down.

Sanders’ decision to exit the race all but guarantees that Biden, whose campaign picked up momentum after he won decisively in South Carolina and swept up much of the South on Super Tuesday, will be the nominee.

By leaving the race, Sanders is allowing the Democratic party — the very establishment he has long railed against — to focus on defeating Trump. Grappling with the onslaught of the pandemic, there was even less of an appetite among Democrats for a long, drawn-out primary battle as they focus on the crisis at hand.

“It’s critical that everyone who voted in a primary so far votes for the Democratic nominee in November,” says Jared Leopold, an independent Democratic strategist who worked on Washington Gov. Jay Inslee’s presidential campaign. “Democrats can’t afford to allow any question about whether people are going to vote in November.”

It will just not be from the White House, as he had hoped. 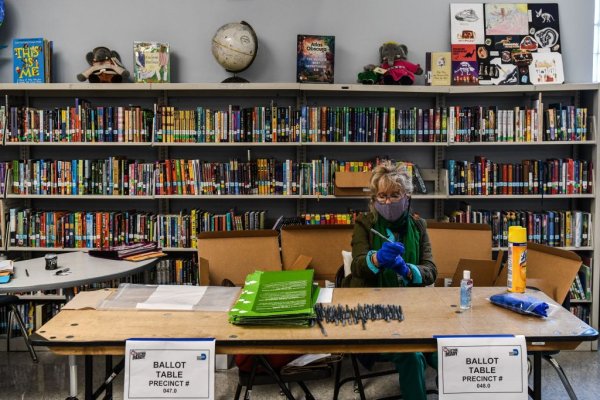