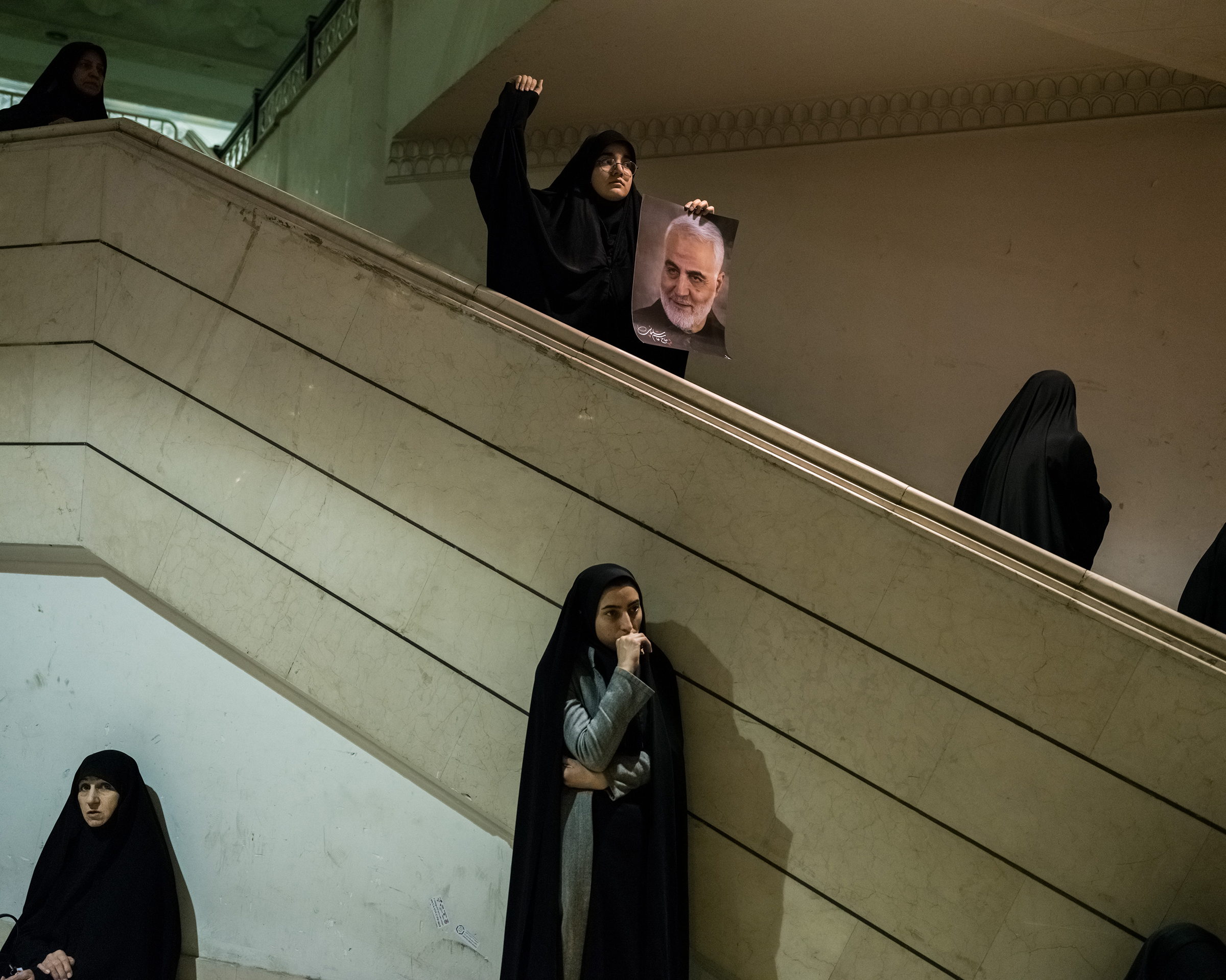 Iranian women at a mosque in Tehran, on Jan. 5, mourn the major general's death.
Newsha Tavakolian—Magnum Photos for TIME

'The City Had Transformed.' Scenes From Tehran's Mass Mourning of Qasem Soleimani

Photographs and Text by Newsha Tavakolian for TIME

The U.S. drone strike that killed Maj. Gen. Qasem Soleimani, commander of Iran’s elite Quds Force, in Baghdad on Jan. 3 brought the U.S. and Iran to the edge of war. Soleimani was considered by Western powers as a central architect in bloodshed across the Middle East, but a war hero by millions of Iranians. Newsha Tavakolian, a longtime contributor to TIME and member of the prestigious Magnum Photos agency, documented the mass public response in Tehran.

I woke up to the news. At first I couldn’t believe it. I had planned a trip with friends outside of Tehran and after deliberating we all decided to head out to a house at the foot of Mount Damavand, the highest peak in the Middle East. In times of uncertainty, like most people in the world, Iranians like to huddle together. We were all very worried about the future and checking our cell phones constantly.

A day later, when I returned, the city had transformed. Billboards and posters with Soleimani’s face were everywhere. The Supreme Leader, Ayatollah Ali Khamenei, had declared three official days of mourning. Before the burial in his hometown, Kerman, Soleimani was to have a giant funeral procession in Tehran.

As a photographer, I sought out what was visually interesting, those who were publicly grieving and felt humiliated by the United States. Of course, there were others who had different feelings and did not participate in the vigils. But for the many who did, their war hero had been killed and they were my focus. His supporters gathered out on the streets to seek a sense of purpose. Iranians are very good at mourning and grief, so makeshift commemorations and other official ones were organized very quickly.

There are challenges while working in Iran, of course, but I try not to focus on those and instead try for the most telling images. One moment that stands out was when, after two hours of walking and working my way through the crowds, I finally managed to get on top of a flatbed truck to get an overview during the procession.

Unfortunately the truck was parked on the wrong side of the street, and I understood that the vehicle with the coffins would pass by on the parallel road, too far for my lens. But suddenly it changed direction and passed by, only a few meters from where I had been waiting.

There was a large amount of security and those who were near the truck became emotional, wailing and reaching out to place their hands on it. At one moment I feared being crushed, as we later saw in Kerman, where a stampede tragically killed dozens during the procession there.

Scale and numbers are very important here in Iran, as measures for the popularity of the deceased, so most of my colleagues sought out high positions to get a bird’s eye view. I had to work my way through the really dense crowds and when I finally found somewhere to stand, I felt as if I had just climbed the highest mountain, as it was physically exhausting.

After seeing all those faces, I decided that I preferred to show their emotions and get more individual images. So I waited until the procession sort of petered out and there was some more space. My aim was to capture more intimate pictures. Because the closer you get, the more you understand.