A protester, wearing a shirt that reads "Please Stop the Violence," is dragged near Brooklyn's Barclays Center on May 29, four days after George Floyd's death.
Malike Sidibe for TIME
Ideas
Photographs and Text by Malike Sidibe
Sidibe is a photographer represented by The Good Brigade.

The last couple days have been very sad, and I was heartbroken, after the death of George Floyd in Minneapolis. I couldn’t just sit and watch. I wanted to be part of the change and fight for all the black people who have lost their lives to police brutality.

As a 23-year-old black kid living in New York City, since middle school I’ve always feared for my life. I’ve had a lot of uncomfortable experiences. It’s time for a change.

Honestly, I was not expecting May 29 to go the way it did. I just decided around 4 p.m. that I wanted to be part of the protest and brought my camera to document it.

I got to the Barclays Center in Brooklyn at around 6:45 p.m. At first, everything was calm and peaceful, then all I saw was people running away, some of them crying because of pepper spray, some were getting tackled and dragged on the ground by police.

After spending a couple hours taking photos, I met up with some friends and walked over to Fort Greene Park. When I got there, there was only one police officer on the scene running after protesters with pepper spray. At one point, he left and that’s when people started lighting a police van on fire.

More police eventually arrived. They started running after the protesters to arrest anyone they could get their hands on, it seemed. I decided to go home when I ran out of space on my memory card.

Throughout the whole protest, everyone was looking out for each other. I saw people risk their lives to help a stranger. Although there was a lot of violence going on, I felt safe around all the protesters.

It’s 4 a.m. as I write this and I am still very tired from all the walking and running around. Everyone who was there wanted their voice to be heard.

They stood united and looked after one another. It was very inspiring seeing people come together to fight for change.

Later that afternoon, I was back out with my camera, this time in Manhattan. When I left my house at 4:30 p.m. to head to Washington Square Park, where the protesters were at the time, I thought I would know what to expect.

A few minutes after I arrived, everyone started walking toward the intersection of Broadway and Houston. It started out very peacefully. Police weren’t telling people to get off the streets, they just followed along as the protesters walked over to Bowery, to St. Mark’s then to Union Square. That’s when the rampage began.

I felt like the cops started losing their patience with some protesters who were talking back at them as they told them to get off the sidewalk. One protester, in a red shirt and denim shorts, was getting yelled at by four officers. One of them then pushed her so hard that she almost fell onto the ground.

Officers appeared to be more upset compared to the ones on Friday in Brooklyn. They seemed to liberally pepper spray, shove, tackle or detain anyone who did not obey what they said.

At one point, I got hit with a baton by an officer while I had the camera in my hands taking pictures. I asked the officer if I did something wrong, but he wouldn’t say anything to me.

After asking him a second time, he yelled at me to shut up and move away from him or he would arrest me.

Some protesters responded to the officers by burning a police vehicle and a few garbage cans, spray painting walls and breaking retail stores’ doors.

Saturday’s protest was so full of outrage, it almost felt like a movie. Despite such anger, the peaceful protesters stood united together, looking out for one another. People were giving out water and milk for those who needed it.

Monday will mark one week since George Floyd’s death. I can tell change is coming to this city, no doubt about it. People have realized that we could only bring change if we stand united, not alone.

They have understood how important it is, now more than ever, to not stay silent. Speak up! Say no to racism. And stand up for those who can’t stand up for themselves. 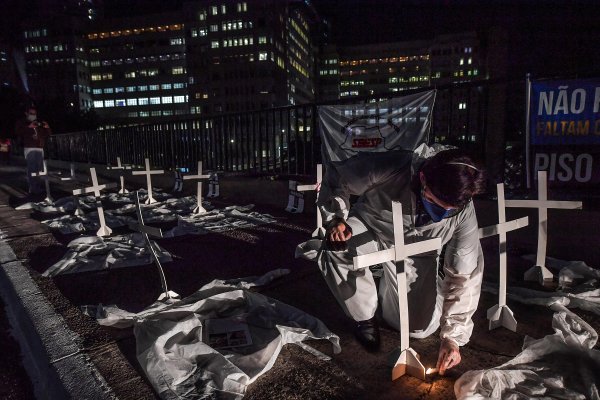 What Will Happen as the Coronavirus Pandemic Epicenter Moves to Latin America
Next Up: Editor's Pick