The Best New TV Shows Our Critic Watched in June 2020

As quarantine spring transitions into pandemic summer, new TV still isn’t in terribly short supply. Good new TV is, unfortunately, another story. This month, I dug through a surfeit of half-entertaining socially distant gameshows and mediocre adult animation in search of stuff worth watching—and came up with only four titles I could wholeheartedly endorse. Below, you’ll find excellent new work from Michaela Coel and Padma Lakshmi, along with two of the year’s best docuseries to date. For more recommendations, here’s a list of my favorite TV from the first half of 2020.

I May Destroy You (HBO)

If it’s easy to forget that rape survivors can contain multitudes, then I May Destroy You will make you remember. Writer, executive producer and co-director Michaela Coel, who broke out with the raunchy, zany yet sneakily insightful British sex comedy Chewing Gum, stars as young author Arabella. A pink-haired London party girl with a pack of fun friends, she made her name with a millennial cri de coeur that’s cherished by Black, female peers who stop her in the street for selfies. By the time we meet her—on her umpteenth recent trip to Italy, demanding “Are we boyfriend and girlfriend?” of a taciturn local who doesn’t seem that into her—Arabella’s literary agency is clamoring for a draft her book. Back home, she plans to pull an all-nighter and finish it but succumbs to the siren song of her drinking buddies. The manuscript she manages to submit the next day, as she stumbles around in a fog, is incoherent enough to worry her reps. It’s all typical enough of a nasty, multi-substance hangover—until she’s suddenly struck by the image of a man panting over her in a bathroom. “Hmm,” she murmurs, and the credits roll on the premiere. [Read TIME’s full review.]

I’ll Be Gone in the Dark (HBO)

After writing about the case on her popular blog True Crime Diary and in Los Angeles magazine, crime journalist Michelle McNamara spent her final years working out her obsession with the Golden State Killer on the page. When she died, her husband, the comedian Patton Oswalt, enlisted fellow crime writer Billy Jensen to help her researcher Paul Haynes collate the manuscript that would become I’ll Be Gone in the Dark—a best seller and instant classic. But it wasn’t until after its publication, in 2018, that DNA evidence led to the killer’s arrest. In a fantastic HBO docuseries that shares the book’s title, director Liz Garbus (Lost Girls; What Happened, Miss Simone?) carries on the collective effort to finish McNamara’s work, fusing mystery and biography into an unusually empathetic true-crime story that feels complete at last. [Read the full review.]

This eight-part docuseries—which recently gained an unmissable bonus episode documenting its subjects’ lives during the height of the COVID-19 outbreak—follows four physicians at the titular New York City hospital over the course of several months on the job. Once a “glorified community hospital” where people came largely to give birth or die, according to one of its protagonists, neurosurgery department chair Dr. David Langer, it has over the past several years become a more diverse and ambitious institution. By choosing the doctors they profile there with care, director-producers Ruthie Shatz and Adi Barash capture the astounding range of personalities, specialities and styles of care the medical profession encompasses—and do justice to the many varieties of everyday heroism that take place behind hospital doors. [Read the full review.]

June 18 was a big day for Padma Lakshmi—one that ended with Bravo airing the finale of Top Chef: All-Stars L.A., the reality juggernaut she’s hosted since its 2006 premiere, but began with something even more exciting: the debut of her Hulu show Taste the Nation. A somewhat bland title undersells the ambitious premise of the series, which sends Lakshmi around the country to learn about the many cultural hybrids that make up the American diet. In the South Carolina Lowcountry, she explores the rice-based cuisine of the Gullah Geechee people, an African-American community whose culture is deeply influenced by their enslaved ancestors’ West African origins. (Non-subscribers can watch the full episode for free on YouTube.)

San Francisco’s Chinatown is the home base for her investigation of the widely misunderstood Chinese-American dish chop suey. Even the supposedly all-American hot dog is traced back to its origins with a half-hour set amid the remnants of Milwaukee’s German immigrant community. (In a series highlight, Lakshmi spends much of the episode cruising around in the Oscar Mayer Wienermobile.) Born in India but raised in New York and California, the host is on a quest to prove that immigration is at the core of American identity, enlisting historians, working chefs and food-world icons like Madhur Jaffrey to help. She isn’t afraid to get political, either; the series premiere takes her to El Paso, in a search for great burritos that doubles as a snapshot of a culture threatened by escalating tensions at the U.S.-Mexico border. Viewers who miss Anthony Bourdain’s smart, artful, culturally sensitive and often politicized shows are sure to find a worthy successor here. [Read Lakshmi’s TIME essay on authenticity and cultural appropriation in the food world.] 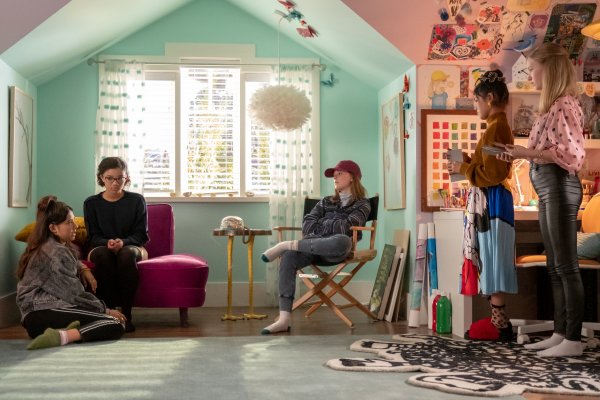 The Baby-Sitters Club Is the Only Pure Thing Left in This World
Next Up: Editor's Pick