'Policing and Racism Are Public Health Problems.' How Minneapolis Protesters Contend With COVID-19

Protesters gather in front of the a precinct police building while it burns on May 28, 2020 in Minneapolis, Minnesota.
Scott Olson—Getty Images
By Jasmine Aguilera

On Tuesday afternoon, 77-year-old August Nimtz Jr. joined a gathering of local residents in front of Cup Foods, a deli on Chicago Ave. in south Minneapolis. It’s where George Floyd was confronted by four police officers the previous day and died after one, Derek Chauvin, held him under arrest with his knee on Floyd’s neck for nearly nine minutes.

“I’m a 77-year-old African-American male,” Nimtz, a professor of political science at the University of Minnesota, tells TIME with a chuckle. “I’ve gotta be concerned [about catching COVID-19], but at the same time there’s the importance of coming out into the streets. We had to do this. If we don’t do it the cops will get away with it again.”

Unlike past protests against police brutality, rallies and activism in Minneapolis are happening now amid the COVID-19 pandemic, which has so far killed more than 100,000 people across America. Most fatalities have been within communities of color.

According to Nimtz, the majority of protesters he saw on Tuesday and at subsequent rallies wear masks, but social distancing is proving impossible. Still, he believes it is worth the risk to his health to participate. Nimtz has protested against police brutality for decades, he says, including helping to lead a 1992 protest after the arrest of Rodney King in Los Angeles. “We know from history that struggles, class struggles and particular issues around race and other kinds of social inequalities, will force people to come back out into the streets,” he says. “After two and a half months of being in lockdown, I think many progressive people have decided to come out.”

As of May 29, Minneapolis has confirmed more than 3,000 cases of COVID-19, and 127 fatalities. According to the data from the city, black people make up 34% of COVID-19 cases, despite making up about 19% of its population. Comparatively, white people make up 24% of cases and 64% of the city population.

The Powerderhorn Park neighborhood, where Floyd was confronted by police, is among Minneapolis’ hardest hit communities according to the city’s data.

Statewide, Minnesota has seen more than 23,500 cases and 996 deaths as of Friday. Employees at meat processing plants, who are predominately people of color and immigrants, throughout the state have also been hard hit.

Also at Tuesday’s protest was Marjaan Sirdar, a longtime community organizer and activist for racial equity.

Since Floyd’s murder, thousands of people have joined rallies and demonstrations calling for police accountability and structural change in Minneapolis. Protests in solidarity have also sprung up across the U.S. in major cities including Los Angeles, Atlanta, Washington D.C. and New York.

In recent days, some protests have become violent, including looting and property destruction as well as further instances of aggressive overpolicing. On Thursday night, the Minneapolis Police Department’s (MPD) 3rd Precinct was burned down; on Friday afternoon Chauvin, the former officer who knelt on Floyd’s neck, was charged with third degree murder and manslaughter. (The four officers involved in Floyd’s death had been fired from the MPD earlier in the week.)

Minneapolis community organizers believe both the protests’ growing scale and intensity seen this week were inevitable. “This is a reaction from people who are angry, people who have been trapped in poverty and who have been screaming forever for relief and our leaders have failed to provide it. Many of us predicted this very moment was going to happen,” Sirdar says.

Protesters stand behind a piece of metal as tear gas is fired in Minneapolis, Minnesota, on May 29, 2020 during a demonstration over the death of George Floyd.
Kerem Yucel—AFP/Getty Images

“People in this community have been very concerned about the Minneapolis Police Department for a long, long time,” says Hans Lee, pastor at the Calvary Lutheran Church, just a block south of Cup Foods. “It was a tinder box.”

Protests previously sprung up in Minneapolis, and beyond, after the officer-involved killings of Jamar Clark in 2015 and Philando Castile in 2016. (Castile was shot by an officer working for the St. Anthony’s Police Department, in a suburb north of the Twin Cities.)

“I think there’s an overall awareness of vulnerability in the midst of this. We are vulnerable to COVID-19 and we’re also vulnerable to what someone referred to as COVID-1619,” Lee adds, referencing the year 1619, when slavery began in the U.S. “The black community is also the most highly affected by COVID-19. These things all flow together, you can’t look at them separately.”

In this vein, officials and organizers in Minneapolis have tried to encourage protesters to social distance and wear masks to limit the potential for viral transmission. “We just want to encourage folks who may be gathering to please be mindful of the risk — and that [the] risk can be reduced, certainly not eliminated but reduced, by social distancing and wearing masks,” said Minnesota Health Commissioner Jan Malcolm at a press briefing Thursday. She added that gatherings the size of what Minneapolis has been seeing the past few days could “very predictably accelerate the spread.”

Just up the street from Cup Foods are the offices of the Centro de Trabajadores Unidos en la Lucha (CTUL), a non-profit dedicated to the labor rights movement that has found itself at the center of the protests.

“This happened on our block,” says CTUL spokesperson Isabela Escalona. “This is our community, this is where our members walk, that’s our bus stop, that’s our community right there. So as soon as we heard the news we immediately sprung into action.” CTUL members are now sewing masks and distributing them to protesters.

“Paper masks especially burn the skin after being sprayed with tear gas,” Escalona explains, noting that tear gas has been deployed by the MPD on multiple occasions in response to protests. “Even a cloth mask is not something you want to put right back on after you’ve been sprayed … we’re going to need tons of masks as long as the police keep using force the way they are.”

Escalona says she believes an uptick in coronavirus cases is just as inevitable as the protests themselves. But, she adds, the blame for that uptick lies with the public officials who didn’t act sooner to address racial inequality and immediately press charges against the officers involved in Floyd’s death.

“Policing and racism are public health problems,” she says. “For us they’re one [and] the same.” 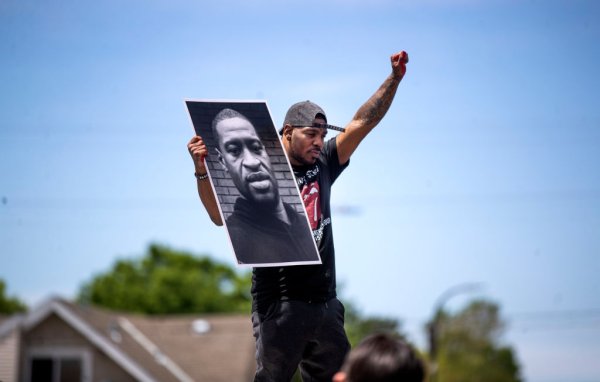