Why Minneapolis Is Erupting Over a Police-Related Shooting

Was Jamar Clark handcuffed when he was shot and killed by police?

That’s the question many Minneapolis protesters are asking after the fatal shooting of a 24-year-old black man in the early morning hours Sunday following a confrontation with police officers.

On Wednesday, hundreds of demonstrators demanding answers in Clark’s death protested outside of a Minneapolis police precinct headquarters, where police erected barricades, used pepper spray against demonstrators, and attempted to take down a makeshift camp created by protesters, according to the Minneapolis Star-Tribune. Some protesters threw rocks and bricks at police and several officers were injured. Dozens of protesters have been arrested over four days of demonstrations.

The Bureau of Criminal Apprehension, a state agency investigating the case, publicly released the identities of the two officers involved in the shooting on Wednesday—Mark Ringgenberg, 30, and Dustin Schwarze, 28. According to the Associated Press, the two officers have each had seven years of law enforcement experience, 13 months of that with the Minneapolis Police Department.

The state agency says several videos exist showing the confrontation between the two officers and Clark, including cell phone videos taken by bystanders as well as nearby surveillance recordings, but none of them show the full incident. Minneapolis police were not wearing body cameras.

According to state law, information gathered by law enforcement during an active criminal investigation can remain private, but video would likely be released once the investigation is completed.

Police say they were called to the scene early Sunday after Clark was interfering with paramedics who were treating a woman, who has been described as Clark’s girlfriend. At least one witness says Clark was handcuffed when he was shot. The Minneapolis police union, however, says Clark reached for an officer’s gun and was not handcuffed. The incident is the latest to involve police and the deaths of black men and boys to roil an American city since the fatal shooting of Michael Brown in Ferguson, Mo., by Officer Darren Wilson last summer.

The Department of Justice is currently investigating to determine whether Clark’s civil rights were violated, and the FBI is conducting its own investigation.

The Minneapolis Police Department, meanwhile, has had a history of misconduct. According to the Star-Tribune, the city paid $14 million in settlements between 2006 and 2012. The newspaper says more than 400 civilian complaints were lodged against officers between 2012 and 2013, but no officers were formally disciplined. 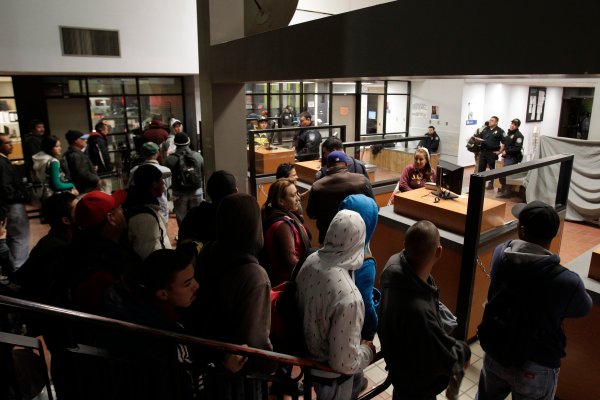 More Mexicans Are Leaving the U.S. Than Entering
Next Up: Editor's Pick