In cell phone footage taken Monday by a bystander, Chauvin can be seen kneeling on Floyd’s neck for nearly eight minutes while arresting him over allegedly paying with a counterfeit $20 bill. Floyd, a 46-year-old black man, was handcuffed and can be heard saying that he cannot breathe. Floyd was pronounced dead later that night while in police custody.

Footage of Floyd’s arrest has sparked protests in Minneapolis and around the country over the past three days, some of which have grown violent.

When asked why Chauvin wasn’t arrested for Floyd’s killing earlier, Freeman said his office charged the case “as quickly as sufficient admissible evidence” could be investigated. He said their office now has enough evidence to charge Freeman, including the cellphone footage of Floyd’s arrest, body camera footage from responding officers, statements from witnesses, a preliminary report from a medical examiner and discussions with an expert. Chauvin’s attorney did not immediately respond to TIME’s request for comment.

George Floyd’s family said through their attorney on Friday that while Chauvin’s arrest is an “overdue step on the road to justice,” they demand he be charged with first-degree murder.

Chauvin and the three other responding officers have been fired from the Minneapolis Police Department, and the Federal Bureau of Investigation (FBI) has opened an investigation into Floyd’s death.

The three other officers have not been taken into custody, although Freeman said they are under investigation and he “anticipates charges.”

The Department of Justice is conducting a parallel investigation into whether any federal civil rights laws were violated during Floyd’s arrest. Attorney General William Barr said in a statement on Friday: “Both state and federal officers are working diligently and collaboratively to ensure that any available evidence relevant to these decisions is obtained as quickly as possible.”

Chauvin’s murder charge comes after recent national uproar over the lack of investigation into the death of Ahmaud Arbery, a black man in Georgia who was chased down, shot and killed by two white men while jogging in February. Footage of the attack went viral in May, causing many to question why neither of the white men had been arrested or charged. On May 21 the two men, Gregory McMichael, 64, and his son Travis McMichael, 34, were arrested and charged with murder and aggravated assault.

The former Minneaplois police officer’s arrest also comes after footage of a white woman calling the New York police and falsely accusing a black man of threatening her went viral. The video was taken in Central Park by the man himself, Christian Cooper, who had asked the woman, Amy Cooper, to leash her dog. 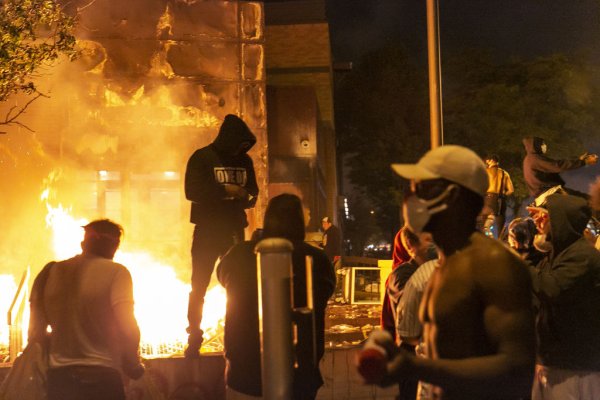