Kenya Barris had been working in TV for more than two decades by the time Black-ish made him a brand name. Debuting in 2014, alongside Fresh Off the Boat, Empire and Jane the Virgin, the ABC sitcom about an upper-middle-class black family helped ignite a boom in shows that centered on people of color. It’s since become a franchise, spinning off the ’80s-set prequel Mixed-ish and Freeform’s Grown-ish, which follows the family’s eldest daughter to college. In his free time, Barris scripted the blockbuster Girls Trip and produced movies like the Issa Rae-Regina Hall vehicle Little. His signature is the skillful use of familiar comedic forms to explore contemporary black life.

But when he signed with Netflix in 2018, it wasn’t just about the $10 million payday. Months before Barris left ABC, it shelved an ambitious, ostensibly provocative episode of Black-ish that reflected on recent events like Charlottesville. The incident was proof he’d outgrown the constraints of network comedy, creatively and politically. And the result is #blackAF, his first scripted series for Netflix. In a note to critics, Barris explained, “I wanted this to be something bold, honest, and unfiltered.”

In some ways, it is. No longer content to filter his ideas and experiences through Black-ish’s Johnson clan, Barris stars as a version of himself: a successful producer drifting around his large glass-and-concrete home, alternately oblivious to and bickering with his wife (Rashida Jones) and their six kids. Framed as a documentary directed by their teen daughter (Iman Benson), the show has a looser structure than his earlier work. It’s the Curb Your Enthusiasm to Black-ish’s Seinfeld, with monologues interspersed throughout that tackle fraught issues within the black community, like materialism and fatherhood.

These interludes can be illuminating, but they—along with the framing device and too many tired family-sitcom plots (e.g., Mom and Dad do drugs)—slow the already languid pace. More engaging are scenes that depict Barris’ professional life, as a creator whose career has taken him from Inglewood to Hollywood; in the strongest episode, he (with guest stars including Rae, Ava DuVernay and Tyler Perry) agonizes over how to judge black art. And though he’s no actor, Barris’ Larry-David-like self-awareness lends authenticity to his performance. Even if it takes another season to perfect, #blackAF feels substantial enough to justify the investment. 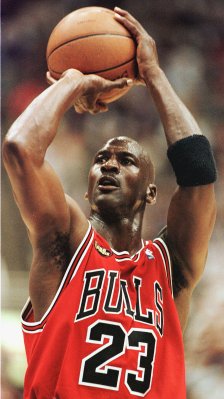 ESPN's Michael Jordan Doc Is What We Need Right Now
Next Up: Editor's Pick