Review: Girls Trip Is the Funniest, Raunchiest Movie of the Summer

In the past year or so, we’ve seen so many women-behaving-badly comedies—Rough Night and Snatched are two of the most recent—that you’d think women had only just discovered the pleasures of heading out with friends, with hair teased high and necklines plunging low, for a debauched night on the town.

But these movies have been disappointments, and their novelty has worn thin. Past a certain point, it’s no fun watching women drink to the limits of consciousness or puke their guts out. In trying to prove they can be as wild as the guys, the women in these movies mostly just settle into a tired pattern of self-humiliation. The alleged payoff of these pictures—generally telegraphed by the obligatory moment in which a bunch of girls link arms and stride into the club in a sassy slo-mo strut—is really just a cheap junk tiara.

You could be forgiven for thinking Malcolm D. Lee’s Girls Trip is just another entry in this exhausted genre. And no matter what, consider yourself forewarned that the movie’s gags, and its language, reach a sailors-on-leave level of crudeness. Yet Girls Trip succeeds where the others have failed. It’s hard to say whether that’s thanks to Lee’s characteristically breezy, no-sweat direction (he’s the writer-­director behind the Best Man comedies as well as the director of the jubilant blaxploitation parody Undercover Brother) or to the movie’s buoyant and superbly matched cast. Most likely it’s a secret cocktail combo of both. Girls Trip is just fun, a movie that—even within the context of its broad, exaggerated humor—never seems to be trying too hard.

You’ve seen the setup before, probably only a few weeks ago if you’ve darkened the doors of a movie theater. Four best friends from college, now edging toward middle age, reunite after falling out of touch. Regina Hall’s Ryan Pierce, a successful writer and aspiring heir-to-Oprah TV star, has been invited to work her magic at the Essence Festival in New Orleans, and she decides that this might be a good time to get the old gang, known as the Flossy Posse, together. Sasha (Queen Latifah), formerly a successful journalist, now runs a gossip site—work that doesn’t make her particularly happy. Lisa (Jada Pinkett Smith) is the divorced mom who lives for her children and has fallen into premature frumpiness. Dina (the glorious Tiffany Haddish) marks time at an office job, but she really just lives to have a good time. Of the four she’s the one with the dirtiest mouth and the one most likely to take wild chances. Her wardrobe is a menagerie of neon animal prints, and she favors hoop earrings the size of cruise-ship portholes.

Even though Ryan has a reputation to uphold, the women waste no time in getting up to no good, hitting the clubs in their tightest dresses and highest Loubs. (Timid Lisa is the one who needs the predictable makeover: her defense of her dowdy skirt, ostensibly hand-embroidered by Guatemalan artisans, is one of the movie’s funniest bits.) Girls Trip contains the most outrageous depiction of public urination I’ve ever seen—but I mean that as a recommendation, not a deterrent. There’s the obligatory ridiculous white girl (played by Kate Walsh). But face it—white girls are pretty funny. And yet, in the end, the movie is generous toward her, as it is to all its characters.

These women learn life lessons, sure. One of them gives a loser guy the gate, and another scales a long-overdue career overhaul. Through it all, they laugh, scream and mime unbelievably dirty sex acts. But the overall mood is one of joy and catharsis rather than self-inflicted debasement. This is a girls’-night-out comedy that doesn’t leave you feeling depleted and insulted. Girls Trip has tall shoes to fill, and it never stumbles. 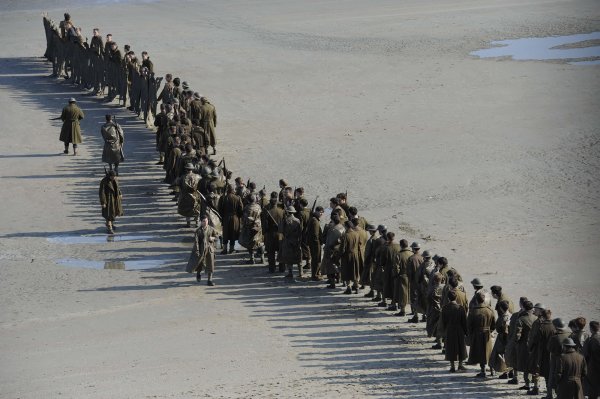 Christopher Nolan: Dunkirk Is My Most Experimental Film Since Memento
Next Up: Editor's Pick