Review: A Family Seeks Its True Colors on black-ish

Anderson and Ross on black-ish.
Adam Taylor/ABC
By James Poniewozik

When The Cosby Show debuted 30 years ago this fall, Bill Cosby took it on faith that TV viewers would accept a sitcom about an upper-middle-class African American family. The bet worked, even if that faith wasn’t 100% rewarded. As Mark Whitaker writes in his new biography Cosby, although the show was a mammoth mainstream hit, it still dealt with white reporters who questioned if it was “realistic” (translation: are there really upscale black people?) and on the other hand, black commentators who accused the show of ignoring social issues or even Uncle Tomism.

It’s not that race was irrelevant to The Cosby Show, or that the Huxtables just “happened to be black”–hardly. Cosby celebrated African American art and culture on the show, and there were stirring moments like when the family fell silent to watch the “I Have a Dream” speech, days before Martin Luther King Jr. Day was first celebrated as a national holiday in 1986. But by Cosby’s design, the show was not overtly, textually “about” being black in so many words. The Huxtables’ great achievement was simply being–being broadly accepted, loved and believed.

Thirty years later, ABC’s black-ish (Wednesdays, 9:30 p.m. ET) looks at another well-to-do African American family. But Andre “Dre” Johnson (Anthony Anderson), a successful L.A. advertising executive married to a doctor, doesn’t feel nearly so inconspicuous. “When brothers start getting a little money, things start getting a little weird,” he says in an early voiceover; he imagines a tour bus pointing out his household, “the mythical and majestic Black Family, out of their natural habitat.” (“Go ahead and wave! They’ll wave right back!”)

Can you blame a post-Huxtable for feeling not-so-post-racial? We can argue whether things have progressed, regressed, or simply gotten weirder since the Huxtables’ day in American society overall. But the fact is, here we are, three decades later, and a major network premiering a comedy about an African American family is still news.

Since Cosby, black family sitcoms, with few exceptions (e.g., The Bernie Mac Show), have aired on smaller networks, or on cable, or not at all. The election of President Obama, it’s almost cliché to point out, did not end racism or prevent the anguish in Ferguson, Mo. Only after the smash success of Kerry Washington on Scandal do we have more than one black woman starring on a TV drama. And that didn’t happen without, last week, an essay in the New York Times labeling Scandal producer Shonda Rhimes and some of her characters “angry black women.” (When if anything, as I wrote last week, Rhimes is one of the most unabashed makers of gleeful, twisty fun on TV.)

But the very funny pilot of black-ish is not a fish-out-of-water comedy. If anything, Dre is worried that his kids–who have never known anything but affluence, mostly white classmates and a black President–feel too comfortable and assimilated. The biggest affront comes from his son André Jr. (Marcus Scribner), who plays field hockey instead of basketball and goes by “Andy” because “I think it says I’m edgy but approachable.” “I think it says I hate my father and I play field hockey,” Dre answers.

When Andy announces that he wants a bar mitzvah, Dre decides his kids need a dose of race consciousness. His Pops (a slyly crotchety Laurence Fishburne) thinks it’s overdue; his biracial wife Rainbow (Tracee Ellis Ross) thinks it’s an overreaction. This family dynamic is mirrored at Dre’s office, where he’s excited to get a big promotion–only to discover that it’s to Senior Vice President of the Urban Division. (“Did they just put me in charge of black stuff?”) With this, black-ish becomes something more complicated–about wanting to find that place where you’re not defined by your race, yet your culture doesn’t become irrelevant. “I wanted to be the first SVP who happened to be black,” Dre tells Rainbow.

It’s one of those twists of The Great TV Subconscious In the Sky that black-ish premieres the same night as the season 4 premiere of Comedy Central’s Key and Peele, the best sketch comedy now on the air–and one that’s also sometimes about the complications of being black today and sometimes about happening to be black.

Keegan-Michael Key and Jordan Peele, both biracial themselves, have built a microtuned comedy machine for measuring the contours of Obama-era America. In one brilliantly simple sketch, Peele reprises his impression of Obama, greeting supporters after a speech; while he greets his white admirers with a prim, reserved handshake, each black guest gets a more effusive, back-thumping, fist-bumping hello. He’s the Code Switcher-in-Chief.

In other bits, race is incidental, like a fantastic sketch in which a family (including guests Lance Reddick and Romany Malco) get answers to their well-meaning, but wildly off-base, questions on how to support a gay cousin at his wedding. (“Where do you get the Euros to buy gay gifts?”) The first episode also includes some laconically funny interstitials with the duo driving a car and shooting the breeze, a la True Detective (which has a parody built in elsewhere in the episode) or Key and Peele’s guest role in Fargo. And then there’s another genius faux-drama bit where the pair fight shape-shifting aliens in a postapocalyptic ruin, telling the invaders from the humans by the aliens’ inability to mimic human racial stereotypes. If the choice in comedy was once between being black (or biracial) or happening to be black, Key and Peele choose both.

As for black-ish, its premise–man tries to build his family’s race consciousness, hilarity ensues–at first sounds more like the material for a comedy sketch, or an episode of a sitcom, than an entire series. And the pilot spends a lot of time spelling out exactly what it’s about; like many pilots this season of every race and creed, black-ish is drowning in voiceover.

It’s a funny enough voiceover to excuse, though, as when Dre frets that other races have “picked up” the culture he and his peers have dropped. (“Big butts, R&B and dancing? Those were the black man’s go-tos!”) Black-ish‘s nuance is promising–it’s aware that there’s not just one way to be black–and the sheer level of execution suggests it has staying power. Anderson and Ross have excellent chemistry, as when a (friendly) argument about the kids’ assimilation derails into a (still friendly) argument over whether O.J. was guilty.

Written by Kenya Barris (Are We There Yet?), black-ish‘s first episode is full of incisive racial observations, intra- and inter-. (It’s co-executive produced by Larry Wilmore, once “senior black correspondent” for The Daily Show, who is stepping back his role to host Comedy Central’s Minority Report next year.) But it also works simply as the kind of oddball family comedy that ABC can do well, if not always well in the ratings; the awkward son taking up field hockey, for instance, recalls the late, lamented Trophy Wife.

ABC gave critics only the pilot of black-ish, which is not enough to judge its trajectory–whether it will stay as focused on its state-of-blackness premise or become like its schedule partner Modern Family, which foregrounds its how-we-live-now alternafamily themes once in a while. For now, I can only say what I want to hear about any new half-hour: it happens to be funny. 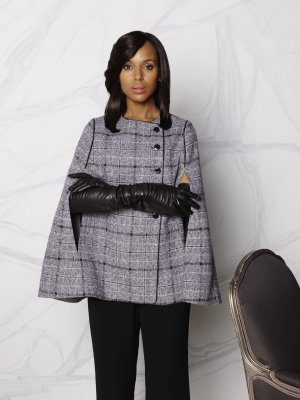